NEH at 50: An Investment in Life-Long Learning

In 1965, President Lyndon Johnson, a former teacher, acted on his abiding belief in education by securing the passage of three landmark laws. The Elementary and Secondary Education Act provided the first general federal aid to K-12 education, with support allocated to school districts with the largest percentages of low-income populations. The Higher Education Act introduced federal need-based college scholarships and funding for the purchase of college library books. The National Foundation on the Arts and the Humanities Act established the National Endowment for the Humanities (NEH) and its sibling agency, the National Endowment for the Arts. Although the impetus for NEH's creation had come from academic organizations seeking federal funds for scholars, the Endowment would also ultimately constitute a public investment in civic education and life-long learning.

As humanities scholars in the early 1960s looked with envy at the National Science Foundation and its grants to the nation's scientists, several learned societies formed a National Commission on the Humanities, chaired by Dr. Barnaby Keeney, the president of Brown University. The commission naturally recommended a humanities counterpart to the scientific foundation and lobbied Congress and the White House for its creation. Yet, both the commission and its allies in Congress also believed that the Endowment must reach beyond the academic community to foster a universal civic literacy and ensure "a better understanding of the American way." The legislation's declaration of purposes even stated, "Democracy demands wisdom and vision in its citizens." The Endowment's advocates hoped that the new entity would improve the quality of humanities teaching at every level, while giving the American public a greater understanding of history and philosophy with which to make sound judgments.

The Endowment's public mission was pragmatic as well as philosophical, since this broader mission was essential to attract the necessary congressional support to pass the legislation and to sustain the agency over a period of years. Henry Allen Moe, the Endowment's interim chairman, observed that "What the Humanities Endowment does with taxpayers' money must, to merit continuing support, make some impact upon the lives of people outside the academic community." For NEH to survive, Moe understood that it must become, in Justice Oliver Wendell Holmes's words, "one of the felt necessities of the times."

The first members of the Endowment's National Council did not receive appointments until late January 1966, so the responsibility of determining the kinds of programs NEH would fund fell largely to Moe and Keeney. Their list of kinds of public programs that the Endowment should consider funding included museums and historical societies, educational television, talking books, and American history projects. Grants to the scholarly community included fellowships; publishing the papers of great Americans and definitive editions of great American authors; training for the personnel of university presses; excavations of historical and archeological sites; computer research in the study of foreign languages and in preparing concordances to the greatest of creative literature; and publications by scholarly societies.

Throughout NEH's early years, Congress nudged the Endowment to expand its public programs. In 1969, NEH created the Division of Public Programs as a discrete unit. Three years later, the first state humanities councils were established as private, non-profit corporations governed by boards of civic and academic leaders. By the end of the decade, every state and the District of Columbia had formed a council. Such U.S. territories as Puerto Rico, Guam, U.S. American Virgin Islands also created councils in the following decades.

These diverse, indigenous state humanities councils enable NEH to serve both large and small communities in ways that conform to each state's culture, capabilities, and interests. The councils not only possess extensive knowledge of their states' educational and cultural institutions, but councils' close ties to those entities facilitate collaborations while leveraging resources. The councils also attract additional funding from state governments, local and state-based foundations, and corporations, as well as individual donors. Finally, their respected boards of directors and robust state-based programs strengthen NEH's congressional support.

In addition to the councils' individual resources, their national collective association—the Federation of State Humanities Councils—fosters a dynamic network of communication, assistance, and coordinated activity, further amplifying NEH's public outreach. When a council develops a successful new program, others often adapt it to their states.

While all of the state councils make re-grants to local organizations for public humanities endeavors, many councils also conduct their own programs. The range of such programs varies widely from state to state. Some councils sponsor conferences, public policy dialogues, lecture series, state encyclopedias, and book festivals. Family literacy programs like Louisiana's PRIME TIME Family Reading Time and North Carolina's Motheread have been exported to other states. The Virginia Foundation for the Humanities hosts a popular public radio program, BackStory, featuring three thoughtful and entertaining historians, while the Massachusetts Council's Mass Moments radio series recounts events from that state's rich history for each day of the year.

Reading and discussion programs are common state council programs. The Maine Humanities Council developed Literature & Medicine, a reading and discussion program for health care professionals. Several councils in urban states sponsor The Clemente Course in the Humanities, which makes classical humanities texts accessible to low-income residents. Humanities Texas and other councils frequently conduct professional development workshops for classroom teachers. Although the Texas council collaborates with universities and museums to develop and circulate our own traveling exhibitions, many other councils utilize Museum on Main Street, a collaboration between the councils and the Smithsonian Institution.

While the network of state humanities councils extends NEH's impact to thousands of communities throughout the nation, the Endowment's own public-oriented grant programs also serve tens of millions of Americans. Such NEH-funded blockbuster exhibitions as The Treasures of Tutankhamun; Shakespeare: The Globe and the World; Mexico: Splendors of Thirty Centuries; and The Age of Rubens have drawn record attendance. Public televeision dramatizations and documentaries produced with NEH funding such as The Adams Chronicles and Ken Burns’ The Civil War and The Roosevelts have made history accessible to huge television audiences. NEH has collaborated with the Library of Congress to digitize thousands of historical books and newspapers. Another partnership with other government agencies, including the National Park Service and the National Trust for Historic Preservation, launched Save America's Treasures to preserve some of the nation's most precious historic sites. NEH's emergency grants have assisted local cultural institutions and collections that have been damaged by hurricanes and floods.

NEH's fiftieth anniversary on September 29, 1965, is a timely opportunity to reflect on the Endowment's public contributions described here and many others, which are impressively documented by NEH Chairman William D. Adams in the current issue of Humanities Magazine. The Endowment's research fellowships have transformed the careers of tens of thousands of scholars. Its four thousand seminars and institutes have benefited 85,000 college and high school faculty and their students. NEH's grants to institutions, including its challenge grant to Humanities Texas to restore the historic Byrne-Reed House, have enabled these entities to better serve their stakeholders and the general public.

The anniversary is also a fitting occasion to salute the Endowment's founders—President Lyndon B. Johnson; Barnaby Keeney and Henry Allen Moe; Gustave O. Arlt, first president of the Council of Graduate Schools; Senators Claiborne Pell, Ernest Gruening, Jacob Javits; Congressmen William Moorhead, Frank Thompson Jr., Ogden Reid, John Fogarty, and John Brademas; among others—who had the vision to create NEH, and their successors who had the dedication to sustain it.

In 1969, an interviewer asked Barnaby Keeney what NEH's most significant achievement had been in its first three years. He responded "Surviving!" After five decades, NEH has not only survived; it—and the nation—have flourished, thanks to a unique public investment in life-long learning. 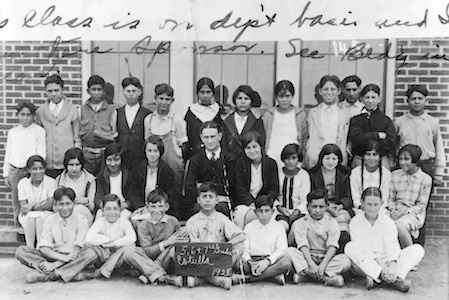 Lyndon B. Johnson at the Welhausen School in Cotulla, Texas, with his first pupils, 1928. LBJ Library photo. 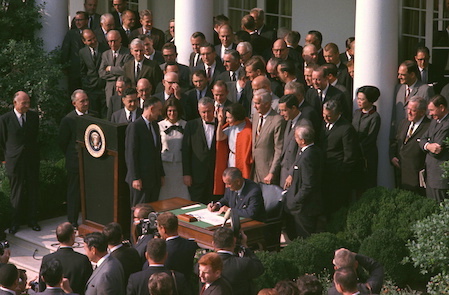 President Lyndon B. Johnson signs the National Foundation on the Arts and the Humanities Act in the Rose Garden at the White House in Washington, DC, on September 29, 1965. LBJ Library photo. 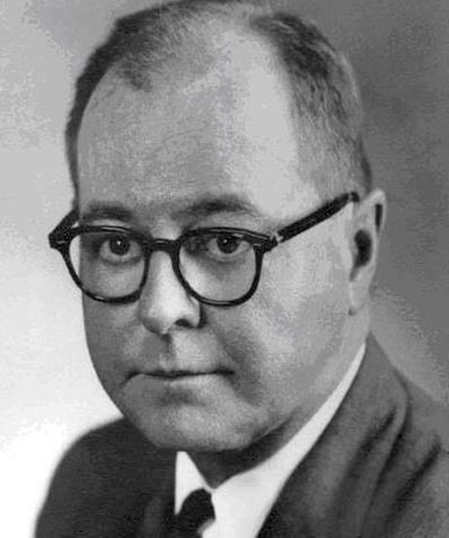 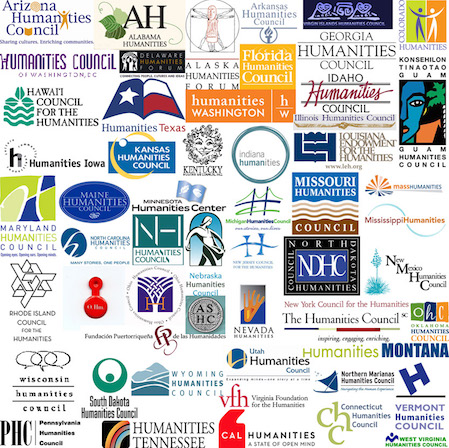 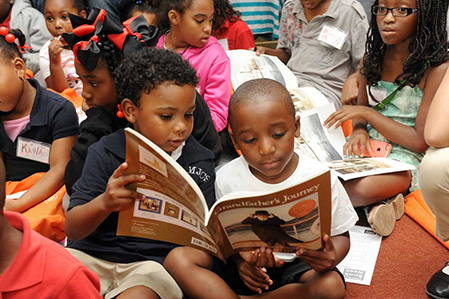 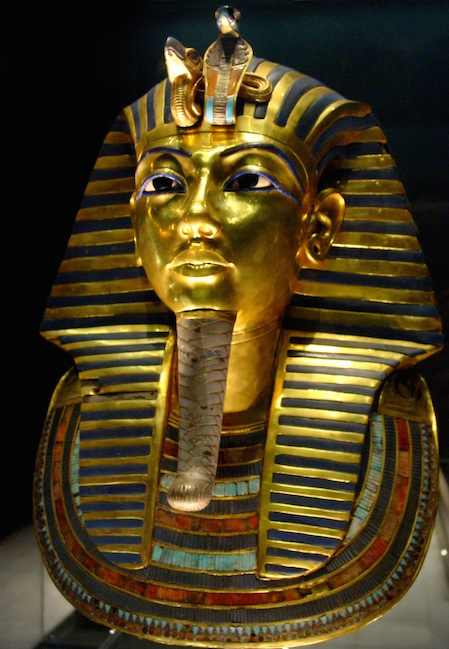 The iconic burial mask of Tutankhamun was among the most popular pieces in The Treasures of Tutankhamun exhibition. Photo by Bjørn Christian Tørrissen. CC BY-SA 3.0.