The Honorable Bruce Cole, chairman of the National Endowment for the Humanities, and various civic and cultural leaders launched the NEH's new Picturing America educational initiative in Texas at an April 16 event in Dallas.

Picturing America will bring masterpieces of American art into classrooms and libraries across the nation, enabling students and citizens to gain a deeper appreciation of our country's history through the study and understanding of its art. President George W. Bush formally announced the program at the White House in February.

Picturing America is composed of forty carefully selected works of art spanning several centuries, all by American painters, sculptors, photographers, and architects. The NEH will distribute large, high-quality reproductions of these images, along with a teacher's resource book, lesson plans, and materials, to schools and libraries nationwide. Including the newly unveiled website, Picturing America's resources unlock the potential in each work of art to enhance the study of American history, social studies, language arts, literature, and civics.

"Our goal is eventually to have Picturing America in every school and public library in the United States," said Chairman Cole. "Picturing America helps us understand our democracy by bringing us face to face with the people, places, and events that have shaped our country. It provides an innovative way to experience America's history through our nation's art." 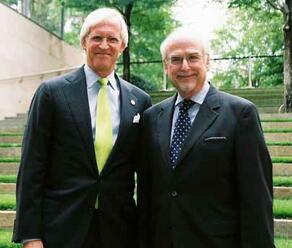