"All my life, I have been driven by one dream, one goal, one vision: To overthrow a farm labor system in this nation which treats farm workers as if they were not important human beings. Farm workers are not agricultural implements; they are not beasts of burden to be used and discarded. That dream was born in my youth. It was nurtured in my early days of organizing. It has flourished . . ."

On March 31st, César Chávez Day, we commemorate the man behind this determined dream and the lifetime of achievements that followed in its wake. A hero in his own time, César Chávez devoted his adult life to bringing justice, dignity, and equality to U.S. farm workers. As a founding leader of the United Farm Workers, Chávez not only established the first permanent union for farm workers, but also won labor contracts improving conditions for tens of thousands. His dedication to the movement inspired millions to take up his seemingly impossible struggle in their own communities. All the while, Chávez held steadfast to his vision of a better, more equal America.

Humanities Texas brings this civil rights hero to life with a new exhibition, In His Own Words: The Life and Work of César Chávez, now on display at The University of Texas at San Antonio's Institute of Texan Cultures. Curated in collaboration with John C. Hammerback, Ph.D., affiliate faculty member in communication at the University of Washington, the exhibition depicts Chávez's accomplishments. Thirty-eight photographs paired with autobiographical reflections from Chávez's own speeches, interviews, and writings illustrate his emergence as a leading figure in the farm workers movement and his successes in pursuing his dream.

The exhibition tells the story of the twentieth-century labor leader through his own voice, beginning with his childhood. Although born into a family that owned land and ran a local store near Yuma, Arizona, Chávez came face to face with the harsh realities of migrant life at an early age. His family lost their land during the Great Depression, headed west in search of work, and eventually settled in California. Migrant life brought difficult times. In communities where the family traveled, worked, and lived, Chávez suffered the pain of physical labor as well as the sting of racial discrimination. When Chávez joined the Navy in 1944, he was exposed to deeper discrimination and openly challenged segregation at a movie theater in Delano, California, the first of many confrontations.

These early experiences left a permanent scar on Chávez. After his tour in the Navy, Chávez returned to California, where he studied the teachings of the Catholic Church and began organizing in the community. Incorporating ideals and strategies from his parents, his religion, and his mentors, Chávez cultivated a strong and unwavering commitment to social justice. From then on, he dedicated his time to organizing a successful farm workers' union. As founding leader of the United Farm Workers, Chávez worked tirelessly to secure better pay, improved job safety, better living conditions, and other essential protections for farm workers. Through strikes, boycotts, marches, and other nonviolent tactics, Chávez's vision became a reality—the fulfillment of his childhood dream.

In His Own Words documents Chávez's contributions to the improvement of farm workers' conditions and to the betterment of American society. Throughout the research process, Humanities Texas collected photographs from the United Farm Workers Collection in the Walter P. Reuther Library at Wayne State University, as well as the César E. Chávez Foundation and the Farmworker Movement Documentation Project. With excerpts from his dynamic speeches, interviews, and authoritative writings, the exhibition provides detailed insight into Chávez's life from his own perspective.

In His Own Words will be on display at The University of Texas at San Antonio's Institute of Texan Cultures through May 25. If your organization is interested in renting this exhibition, please contact our exhibitions coordinator Lindsey Wall at lwall@humanitiestexas.org or 512.440.1991. For more information please see the exhibition's page.

In His Own Words is a We the People initiative of the National Endowment for the Humanities. 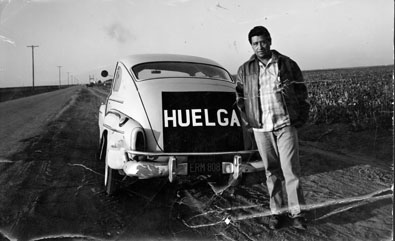 César Chávez at work in the community garden in La Paz, California by Cathy Murphy, 1976. Photo reprinted with permission of the César E. Chávez Foundation and Cathy Murphy. 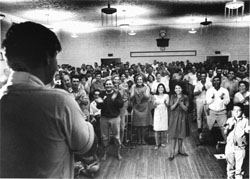