WASHINGTON, DC—The Federation of State Humanities Councils, the national association of the state humanities councils, enthusiastically endorsed the President’s decision, announced this week, to nominate James Leach, a former 15-term Congressman from Iowa, as the next chairman of the National Endowment for the Humanities.

Calling the nomination an "important and timely" selection, Esther Mackintosh, President of the Federation of State Humanities Councils, stated, "Mr. Leach's long and distinguished career in public service and his evident commitment to the improvement of civic life make him an ideal person to lead the NEH at this critical time. He clearly recognizes the key role of the humanities in helping citizens in communities across the nation understand not only our history but our current circumstances."

Rep. Norm Dicks (D-WA), Chairman of the House Interior Appropriations Subcommittee that oversees funding for NEH, said that Leach will "… work with the state agencies and make sure we have a broad distribution of the humanities throughout the country."

During a distinguished career, James Leach has been a Congressman from America's heartland, a congressional leader in banking and international affairs, and a professor at a prestigious university, but in choosing him to head the National Endowment for the Humanities, President Obama recognized that Leach was something else as well: a champion of the activities and endeavors that make human life meaningful. In a congressional environment that was often contentious and partisan, Mr. Leach gained an unshakable reputation for integrity, even-handedness, and an independent and thoughtful approach to issues.

In 2004 Leach co-founded, along with Rep. David Price (D-NC), the bipartisan Congressional Humanities Caucus to increase awareness of the importance of the humanities in public life. He received the 2005 Sidney R. Yates Award for Distinguished Public Service to the Humanities from the National Humanities Alliance in recognition of his work as a champion for the humanities.

An important component of the agency Leach will be heading are the 56 state humanities councils, established to extend the reach of the NEH to communities in every state, the five territories and commonwealths, and the District of Columbia. The state humanities councils offer programs that support families and teachers, provide resources for community institutions, and bring citizens together to collectively address issues of importance. 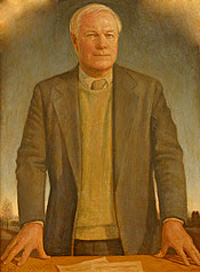