We are pleased to introduce Forgotten Gateway: Coming to America Through Galveston Island, a new traveling exhibition presented in collaboration with the Bullock Texas State History Museum.

As a major gateway for immigration, Galveston Island was the port of entry for hundreds of thousands of people coming to America from 1845 to 1924. Forgotten Gateway considers the importance of place in the immigrant experience, tracing the history of Galveston Island as it changed from a small harborage for sailing vessels, to a major cosmopolitan steamship and railroad hub, and back to a nearly abandoned immigrant station. The exhibition also explores universal themes of immigration including leaving home, encountering danger, confronting discrimination, and navigating bureaucracy.

Forgotten Gateway: Coming to America Through Galveston Island is based on the major exhibition of the same name developed by the Bullock Texas State History Museum and guest-curated by Dr. Suzanne Seriff, independent museum curator and senior lecturer of anthropology at The University of Texas at Austin. Following its exhibition at the Bullock Museum, Forgotten Gateway embarked on a national tour to other institutions, including Moody Gardens in Galveston and the Ellis Island Museum in New York City.

This new, compact traveling version of Forgotten Gateway features twenty-nine colorful photo-text panels and is available for rental through the Humanities Texas Traveling Exhibitions program. The exhibition debuted on November 25, 2014, at The Heritage Society in Houston where it will be on display until January 31, 2015. Special events include The Heritage Society's Holiday Tea and their 52nd Annual Candlelight Tour.

Learn more about reserving Forgotten Gateway for your community by contacting us at exhibitions@humanitiestexas.org. 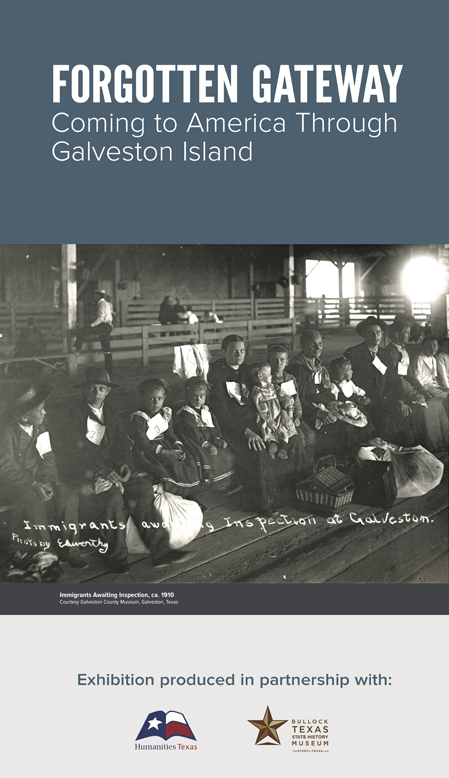