February 23 brought a rare event: snow in Austin! Snow covered the roof of the Byrne-Reed House as snowflakes fell all around. Enjoy these beautiful photographs of the house, which show that the white paint that had previously coated its historic yellow brick has now been removed.

In its previous incarnation as an office building, the house's north windows were narrowed and elongated. The photographs below show that these windows have been restored to their historic proportions and the brick windowsills have been repaired.

The house's south porch windowsills have been reconstructed, and the window headers have been repaired. When the porches were enclosed in the early 1950s, these windows had been partially demolished to create doorways. Below, a view south from the director's office.

Custom-fabricated, wood windows designed to match the originals were produced for those locations where historic windows no longer remain. As seen in this photo of the north facade, the new windows are currently being installed.

Note that the brick of the windowsill is different in appearance than the surrounding yellow brick. Two types of brick were historically used in the house's construction: yellow and iron-flecked. The iron-flecked brick was used to highlight certain architectural features, such as the arches in the photos that follow.

As you can see, the top of this arch was removed to create a window. Sections of the arch where brick was removed have now been repaired.

Below, closer views of iron-flecked brick used to highlight the Byrne-Reed House's elegant arches. The arch below is in what was formerly a meeting room known as the "arch room." Historically, it was the primary entry arch, a function which we are restoring.

For comparison, this is what the arch looked like in November 2009. Its brick was painted and it was part of an interior meeting room. Note the historic porch tile that has been uncovered.

Below, a worker lays new masonry to replace bricks that had been damaged during prior renovations.

Renovations continue on the east porch next to the front entryway. New brick that matches the original is being used to fill in sections of lost or damaged brick. In one of the photos below, the masons work on reconstructing the porch skirt and railing.

The east facade of the Byrne-Reed House on March 2, 2010 can also be seen in the photos below. The second-floor bay window has been covered to protect the reconstructed framing.

Another exciting development is the reconstruction of the chimneys that once crowned the house. While these will not be attached to functioning fireboxes, they restore the historic appearance of the house.

In last month's restoration update, we had mentioned that we are constructing an elevator tower on the building's west side to comply with ADA regulations and to facilitate our exhibitions program. We are using concrete block that is compatible with the historic brick used throughout the rest of the house. Construction on the elevator tower continues on schedule, as seen below.

Humanities Texas is in the final stages of its capital campaign supporting the restoration of the Byrne-Reed House. We are immensely grateful to the individuals and foundations who have contributed to this project and would appreciate any and all additional support. Your contributions will help us receive the full $1 million in matching funds from our National Endowment for the Humanities challenge grant. If you would like to donate to the capital campaign, please mail contributions to: 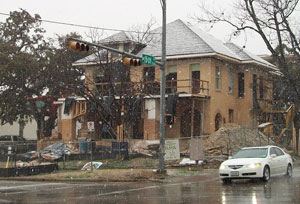 The north facade of the Byrne-Reed House on February 23, 2010. Photo by John Patrick, Journeyman Construction, Inc. 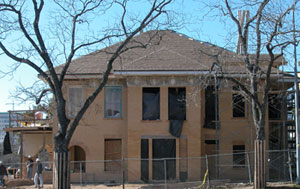 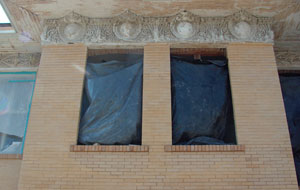 A closer view of second-floor windows on the north facade. 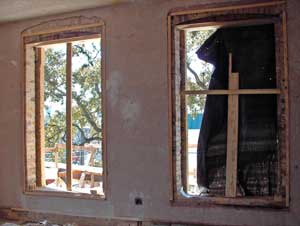 A view south. The window on the left was previously a doorway. 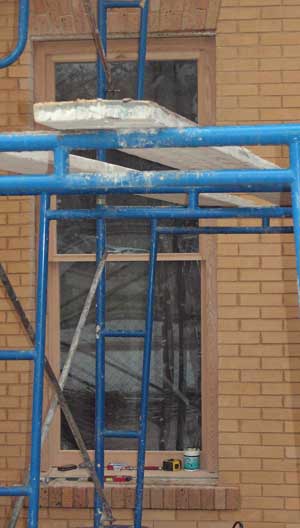 A closer view of outside brick windowsills and new windows. 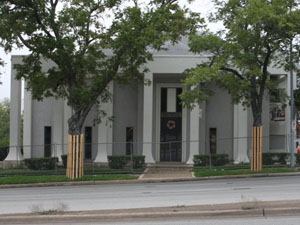 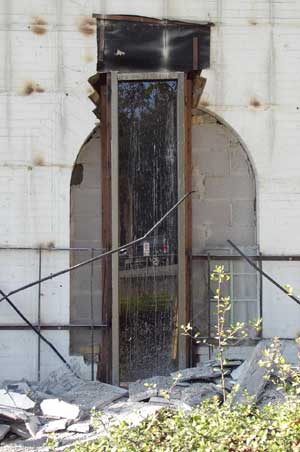 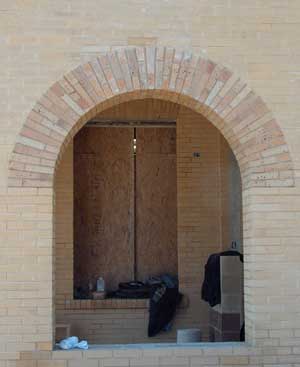 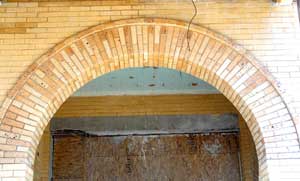 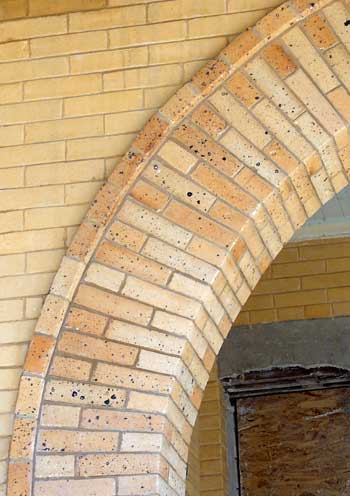 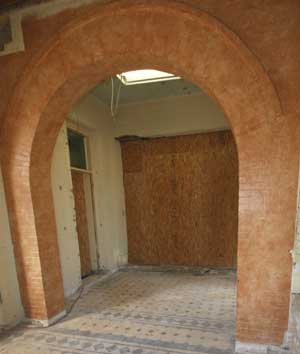 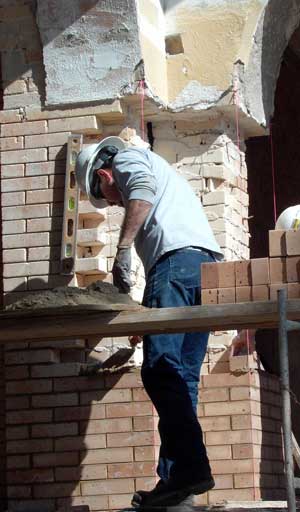 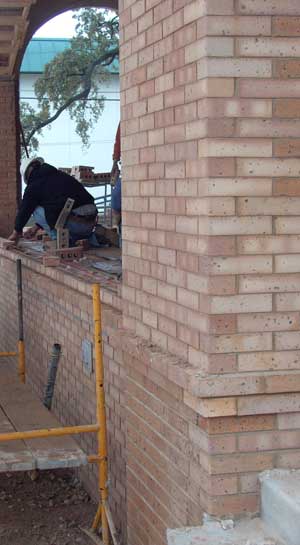 Reconstructing the porch skirt and railing on March 3, 2010. 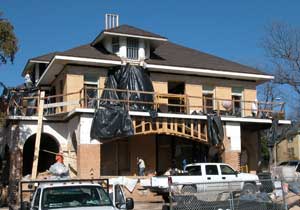 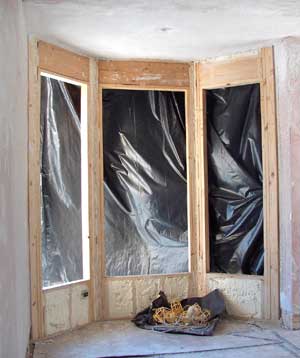 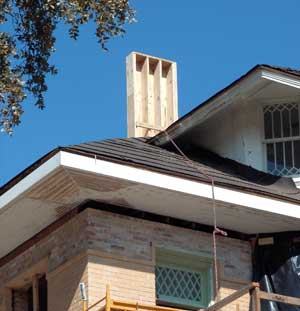 Framing for chimney reconstruction viewed from the east side of the Byrne-Reed House. 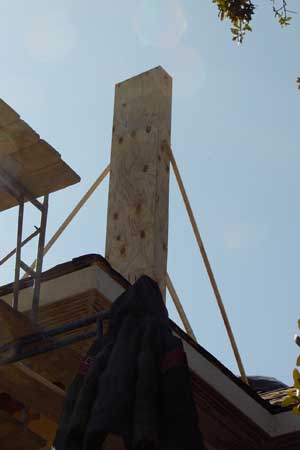 Framework under construction, viewed from the south. 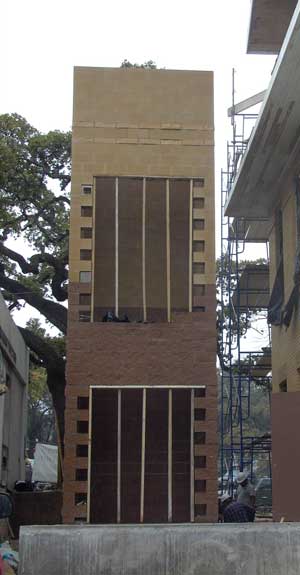 Construction of the elevator tower on the building's west side, viewed from the south. 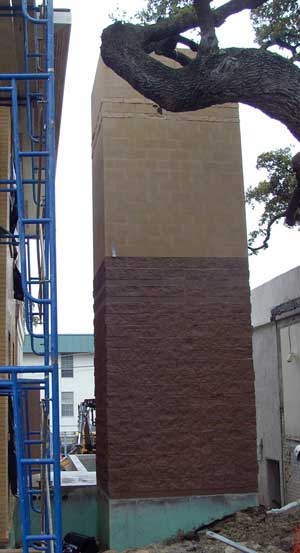 A view of the elevator tower from the north.