Betty Anderson, 75, one of Texas's most distinguished citizens, and a past chair of the state humanities council, passed away on December 28. She was, as the media in Lubbock and elsewhere noted in the days following her death, a tireless champion for education, equal opportunity, and the well-being of all citizens.

It was my great privilege to work closely with Betty during the early years of Humanities Texas. She became a board member in 1978 when the organization was called the Texas Committee for the Humanities and Public Policy (TCH), and she served as chair of the board in 1981. This was an important time in the life of the organization as it evolved from a strictly grant-making organization to one that took on, often in partnership with other agencies, important initiatives and projects of its own. Several of these initiatives had a lasting impact on Humanities Texas.

In 1981, the TCH established a Task Force on the Humanities in the Public Schools of Texas, composed of educators and civic leaders. Betty served on this group which issued a report the following year, Toward Thoughtful, Active Citizens: Improving the Pubic School Curriculum. This was the first of many efforts whereby Humanities Texas has sought to enhance elementary and secondary education and to recognize outstanding teaching in the humanities.

And a year before, with the strong encouragement of Betty, the board approved its largest grant ever, an $80,000 award to the Texas Foundation on Women's Resources, which resulted in a collaborative effort to launch a major touring exhibit on Texas women's history, an exhibit that would tell the untold stories of the women who built Texas communities, established civic organizations, and contributed to the cultural and economic growth of the state. This was the beginning of a long-standing interest of Humanities Texas in documenting women's history.

Any history of women in Texas written today would be terribly incomplete without recognizing the enormous contribution of Betty Anderson. She served on and often chaired dozens of local and statewide organizations, including the League of Women Voters, the American Association of University Women, the Texas Department of Human Services Aged and Disabled Committee, the Texas Commission on Women, and the Center for Public Policy Priorities. She brought to her responsibilities insight, passion, and a commitment to fairness. The public humanities were important to her, not just as endeavors that would enrich individual lives and the wider culture, but as the means whereby citizens could explore difficult public policy choices.

Betty leaves all Texans with an incredible legacy, a model for what it means to be an active, engaged citizen, working on behalf of others. She will be greatly missed. 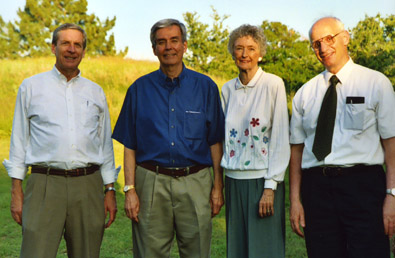