Bill Wittliff, who died suddenly on June 9, 2019, was the quintessential Renaissance man. He was a prolific author, screenwriter, editor, publisher, and world-class photographer. He was also a storyteller par excellence. And, most important, Bill was a dear friend to everyone who knew him.

Bill was a participating author in five of our Holiday Book Fairs, where he signed copies of his trilogy of "Papa Tales" and photography books including La Vida Brinca; Vaquero: Genesis of the Texas Cowboy; and A Book of Photographs from Lonesome Dove. No one had more fun at these annual gatherings than Bill, but everyone enjoyed themselves more when Bill was present.

Humanities Texas began circulating the photographic exhibition Vaquero: Genesis of the Texas Cowboy in 2009. It quickly became one of the most popular of our sixty traveling exhibitions—so popular that we needed to create two additional versions. During the past ten years, Vaquero has traveled to over seventy-five venues all over Texas and as far away as Harpswell, Maine.

Then, in 2017, Humanities Texas added Lonesome Dove, a collection of Bill's photographs from the making of the television series, to our inventory of traveling shows. Bill and Sally Witliff joined us in Canyon for the opening at the inaugural venue at the Panhandle-Plains Historical Museum. Humanities Texas board member Becky McKinley made the reception truly special with gourmet versions of the foods consumed along the fictional trail drive. Lonesome Dove has already traveled to a dozen venues, including the Del Rio Council for the Arts, Midland County Public Library, and East Texas Oil Museum at Kilgore College.

Bill was a dear friend to Humanities Texas and will be greatly missed.

Many wonderful tributes to Bill were written after his passing, including "A Shaman, a Storyteller, a Joyful Boy From Blanco: Memories of Bill Wittliff" (recollections of Bill from friends, colleagues, and Texas Monthly staff) and "In Memory of Bill Wittliff" by Stephen Harrigan.

A memorial service for Bill Wittliff will be held on Sunday, September 8, at 2:00 p.m. at the Paramount Theatre in Austin. 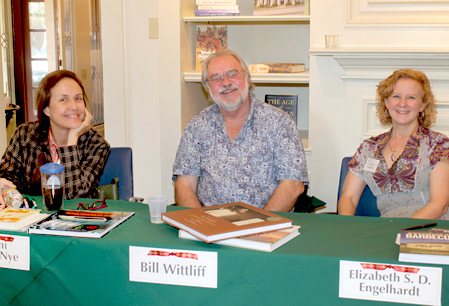 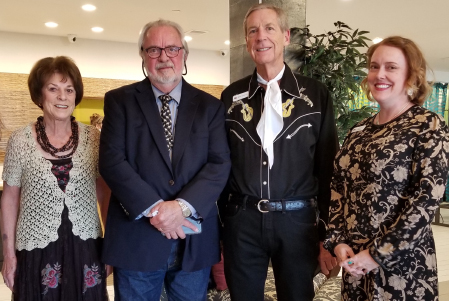 Sally and Bill Wittliff, Mike Gillette, and Melissa Huber at the opening of the Lonesome Dove traveling exhibition at the Panhandle-Plains Historical Museum in Canyon, September 2017.