At the March 31st opening of Humanities Texas's new exhibition, In His Own Words: The Life and Work of César Chávez, Humanities Texas board member and University of Texas at San Antonio President Ricardo Romo explained how he became involved in Chávez's movement and when he met the activist. Read about his memories of Chávez and the people who worked with him below.

When I met César Chávez in 1968, he was gaining international fame as the leader of the United Farm Workers. My wife, Harriett, and I had been teaching in Los Angeles for one year when we were called by friends to assist in the grape boycott. We had a modest role in the labor movement, mainly meeting on the weekends to pass out leaflets in front of grocery stores in the Southern California region. In the aftermath of the great 340-mile march from Delano to Sacramento in 1965, César Chávez took the boycott to the cities of America and Europe. Within a few years, more than 17 million Americans had expressed support for the grape boycott, which soon extended to California lettuce and Gallo wine.

At Franklin High School, where I taught, we formed a support group for the farm workers. In 1969, I took a class of Upward Bound high school students to Delano to meet Chávez and gain greater understanding of the plight of the workers in the fields. In Delano, the headquarters of the UFW, we met Richard Chávez, the creator of the UFW flag with its famous eagle icon, and the dynamic leader and UFW Vice President, Dolores Huerta. We also spoke to rank and file members of the UFW and became familiar with their difficult working conditions. Workers earned about a dollar an hour and worked for long hours in the sun with few breaks and no toilets. On one occasion, we witnessed a small plane flying low off the ground spraying pesticides on the fields as workers labored nearby.

For years, the farm workers had endured these hardships quietly. All that was to change with the founding of the union in 1962. Still, change came slowly and while the union gained thousands of members, there were still many strikes, violence, and organizing setbacks over the next decade. One week in the summer of 1969, Harriett and I volunteered to work with the UFW office and felt that we contributed modestly in organizing membership records. As the week was coming to an end, César graciously invited us to stay for the weekend and be his guest for his daughter's wedding.

The wedding was in the old Filipino Hall, famous as the meeting hall for the first official strike in 1962. The wedding was a brief respite for the Chávez family, many of whom had returned from assignments in cities across America. For us, it was the last summer of volunteer work, as we both entered graduate school at UCLA in the fall of 1970. Still, Harriett and I have fond memories of Chávez, a giant figure in labor history and a man of great character and courage. 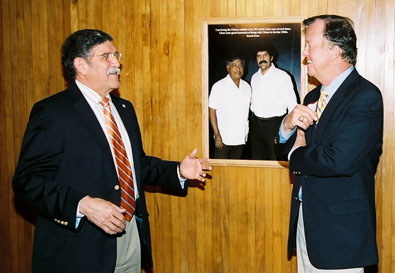