Don Graham, J. Frank Dobie Regents Professor in American and English Literature at The University of Texas at Austin, had little patience for what we often categorize as "local color." Rather, as the leading critic of Texas literature, he championed books and films that were specific in reference but not implication. As he writes in his introduction to States of Mind: Texas Culture and Its Discontents (2011), the Texas writers who interested him most were "those who have found a way to hitch their narratives to a national star, while keeping in mind the Lone Star state from which their work originates."

When my colleagues and I learned of Don's passing in June, we immediately felt the loss. We also recalled how easy and fun it was to work with him. Over the past decade, Don played an important role in a number of Humanities Texas programs. He participated in our 2011 and 2018 Holiday Book Fairs, signing copies of States of Mind and Giant: Elizabeth Taylor, Rock Hudson, James Dean, Edna Ferber, and the Making of a Legendary American Film (2018). In 2017, at an event in Corpus Christi, he moderated a discussion between Stephen Harrigan and Bret Anthony Johnston on the place that city played in each writer's literary career. (We featured a transcript of that conversation in our January 2018 e-newsletter.) Don also provided us with trenchant reviews of early drafts of many Texas Originals radio scripts, usually responding via email the same day he received them.

Larry McMurtry once wrote that Don was "probably as familiar with Texas literature in all its protean forms as anyone now writing." That was certainly true. As we can attest, Don was also remarkably generous with his expertise.

In 2017, Don served on the faculty of our Writing Texas teacher institute at the University of Houston, where he led seminars on using film and literature to examine the difference between the mythic Texas and the actual place where we live. As he guided the discussion—juxtaposing clips from Giant with passages from Tino Villanueva's book-length poem Scenes from the Movie Giant—Don's erudition and wry sense of humor were on full display. The teachers loved it.

We will miss Don greatly. Over the past few weeks, we asked several of his friends and UT colleagues to share their memories of him. We are pleased to share those remembrances here.

Don Graham, my friend for thirty-six years, was arguably the most significant scholar of Texas literature, film, and popular culture for almost fifty years. He published ten books, edited six others, contributed chapters to and reviews of many others. For twenty-one years, I coedited Southwestern American Literature and Texas Books in Review, and Don was a regular contributor and advisor. He also was president of the Texas Institute of Letters, and I was his vice-president before becoming president after Don.

Throughout, Don displayed a sharp mind, and his piercing humor permeated his casual conversation and his literary and film evaluations. One notable review was of Mary Karr's memoir Cherry, a continuation of her autobiography first begun in the highly regarded The Liar's Club. Graham succinctly exploded Cherry with his review title: "The Pits." Keenly alert to humor, Graham told a story about leaving Texas early on to teach at the University of Pennsylvania. It involved a friend who had tried to rent a U-Haul in Killeen, only to hear that U-Hauls didn’t go to Philadelphia. To prove it, the agent showed that no such city appeared in the city names under "F."

Graham's public face was sometimes cranky and cantankerous, and some of friends referred to him as "the Curmudgeon." But he was a strong friend to those he brought into his circle, and, while he disdained traditional academic writing, he was a dedicated researcher who wrote clear, unacademic prose. Again, Graham revealed his sense of humor in casual conversation after an academic conference in Nevada. He and I joined a group for a tour of Boot Hill. After the group examined the statements on headstones, Graham remarked with quick wit that he knew what would be on his: "Here lies Don Graham. He had no class."

Graham was buried in the Texas State Cemetery in Austin, within a stone's throw of J. Frank Dobie's grave, with whose name Graham was connected throughout his years at UT.

Betty Sue Flowers, professor emeritus of English at The University of Texas at Austin and former Humanities Texas board member

In the early '70s, when Don and I joined the English department at UT, it had more professors than any other English department in the world—over ninety, if I remember correctly. But only three of us on the tenure track were Texans, thanks to a policy of hiring that privileged what LBJ used to call "The Harvards." I didn't disagree with the policy because it encouraged well-educated Northerners to feel comfortable moving down to Texas because they would be among their kind. As you might guess, none of the Harvards knew or cared anything about Texas "literature"—or if they did, they didn't tell their students.

So what Don did was bring the big crazy uncle of Texas "literature" to the table of the UT English department. There sat Victorian novels, Romantic poetry, the eighteenth century, Shakespeare, Anglo-Saxon, Medieval literature, Restoration drama, and all the rest of the Great Literary Tradition. Don did something extraordinary. He introduced that crazy uncle with such love and understanding that students crowded his courses, and the scare quotes had to be removed from Texas "literature." Texas literature finally had a seat at the family table.

Don never ignored the craziness of Texas or made a case for accepting inferior writing or local talent just because it was local. He was intelligent, knowledgeable, and sharp, and never looked away from the flaws of our Lone Star literature. But he was also brilliantly analytical, with the capacity to translate that brilliance into entertaining prose and compelling classroom teaching. Pop culture, high culture, high pretentiousness, heart-breaking originality: he understood and analyzed them all.

From one year to the next, there will always be another Shakespeare professor, even a great one, because UT continues to attract the best. But how can the love and understanding that Don brought to that crazy uncle of Texas literature ever be replaced?

Heather Houser, associate professor of English at The University of Texas at Austin

It was an honor and a surprise to become one of Don's comrades in addition to being his colleague at UT Austin. We met in 2011 when I was a new transplant to Austin, a "Yankee" by birth and a West Coaster by choice who studies environmental culture. Here was this Texan, forty years my senior, who spent a blip of time in my home state of Pennsylvania but who otherwise had dwelled physically and intellectually in Texas culture, yet we were fast friends. That was one of Don's abundant charms: he was more interested in the spark of difference, discovery, and unlikely connection than in adhering to the categories that make those things impossible, or at least damn difficult. This spark would be visible in his eyes and posture whether he was meeting someone new for the first time at The Grand pool hall or he'd alighted on a fascinating detail about James Dean or an improbable review of Giant by Rebecca Solnit. I'll miss his openness to improbable connections and the subtle joy that those discoveries would bring to his face.

John P. Rumrich, A. J. and W. D. Thaman Professor of English at The University of Texas at Austin

Don and I became friends in the mid-1980s shortly after I came to Austin as an assistant professor of English. We sometimes played softball together on a city recreational team that included UT faculty and others from around Austin, doctors and lawyers and such. Don was fifteen years older than me and pretty much done playing by then. He arrived at the games in jeans, a tee shirt, and sneakers, not cleats. Though later in life he acquired a custom pool cue, he never would have bought an expensive aluminum bat or glove the way rec league players had started to do. But you could tell he knew the game. Lucas, Texas, where he was born, was small—"two stores, three churches, one cotton gin, and one school house," as Don often said. But next to the school, there was a baseball field, too, essential to the little community. He had a classic pull hitter's swing and laced a lot of line drives. In the field, he took the right path to the ball, watched it into his glove while on the move, and then unwound his lanky frame into an efficient throw. He didn’t have a strong arm at that age, but, when he was a boy, his throwing arm must have been a whip. One of his high school coaches nicknamed him Smoke, after all, and it wasn't because of cigarettes (which he never touched). Don always liked to read, was intellectually curious, and was the first one in his family to go to college. But he told me last year over drinks that he did not go to university for academics but because he wanted to be a college athlete. My guess is that he played baseball till he hurt his arm and started taking more interest in literature than in athletics. Still, in some parallel world, Smoke became a pitcher rather than a professor. He had the arm and the ideal temperament for it. Writing and pitching have their similarities, not least because good pitchers, like good writers, depend on craft as much as talent. They hold emotions in check, keep you off balance, and play off your expectations. I like to imagine that other world's Don Graham standing on a mound with his cap pushed back, a hint of his little sideways smile showing as he rubs the baseball down after getting a strikeout.

David Wevill, professor emeritus of English at The University of Texas at Austin

Don Graham and I taught for many years in the English department, yet I didn't know him well. I did know his reputation, as a fine teacher and respected scholar and writer. Whenever we did get together, I found him sophisticated, widely-read, humorous, and critically acute. His reflective Texas drawl enlivened committees as did his sage opinions. Over time, I read his articles, reviews, and books—thoughtful, detailed, excellent work. Personally, he was attentive, curious, open to new ideas yet solid in his values. Always good company.

We shared (with Wittgenstein) an affinity for Western films, about which Don knew just about everything. He taught me aspects of western history I hadn't known. The last work of his I read was his fascinating account of the making of the film Giant, which he gave me shortly before his death. The sad irony is that we were, belatedly, getting to know each other well in that last month or so, and along with our wives Betsy and Gloria, were looking forward to developing a lasting friendship.

Adiós, Trail Boss.
You were special. 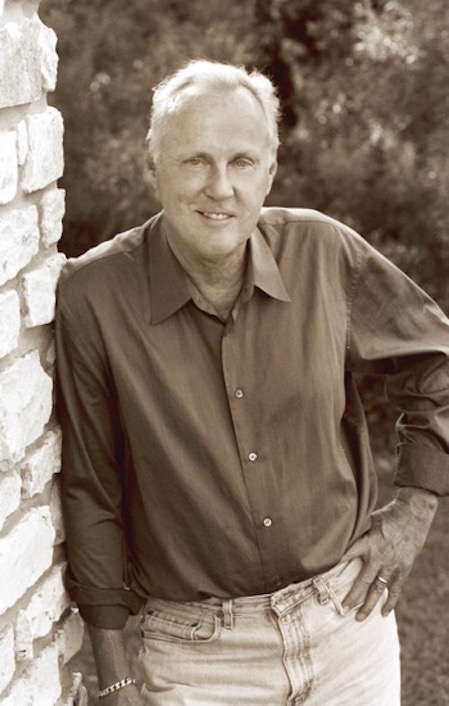 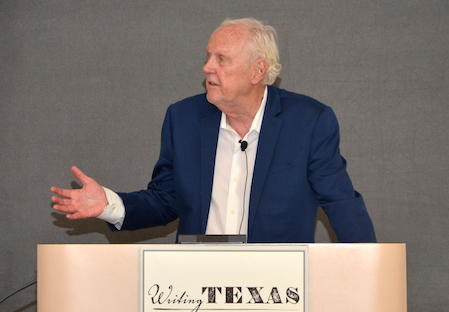 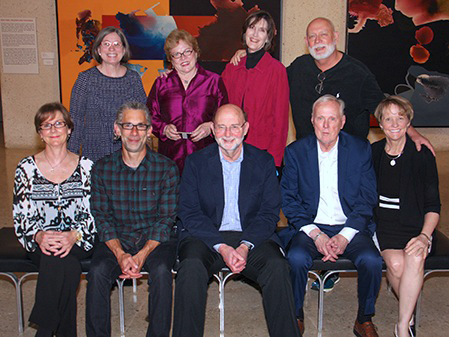 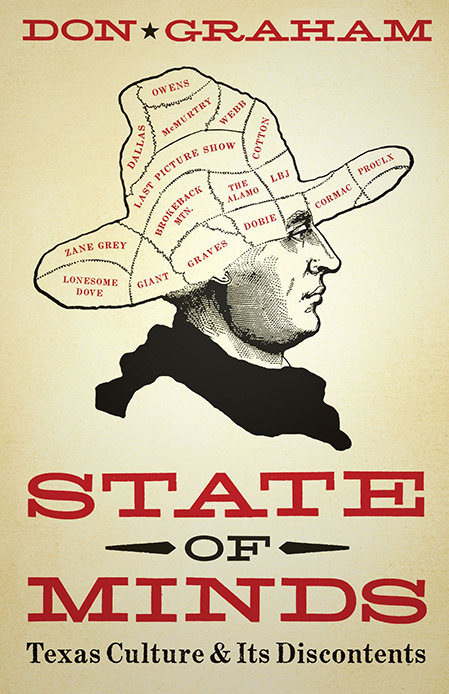 Cover of Don Graham's State of Minds: Texas Culture and Its Discontents (2011). Courtesy of University of Texas Press.