Renowned artist José Cisneros passed away on Saturday, November 14, 2009. He was ninety-nine years old. Cisneros was born in Durango, Mexico, in 1910, but his family was displaced by the Mexican Revolution and eventually settled in El Paso. Cisneros was a world-class illustrator of U.S., Mexican, and Spanish history, and was especially known for his drawings of horses and horsemen. In 2002, President Bush, who collected Cisneros's work, awarded him the National Humanities Medal. King Juan Carlos of Spain knighted him in 1991 to honor his contributions to the understanding of history. Humanities Texas board member Adair Margo, who has shown Cisneros's work in her El Paso gallery, remembers the artist below.

When I received the news that José Cisneros had died, I drove by his tidy home on Hueco Street in El Paso. The wrought iron screen that shields the front porch was rolled shut, and no one was visible through the large front window. A few months before, José would have been waiting, nimbly walking towards my car with a distinctive spring in his step. Hola, guapo, I would say, for he was impeccably groomed. His handsome figure always made me remember the story of Vicenta Madera watching him from the balcony of her family apartment above the Eden Theater on Fifth Street in the 1930s. Every day José would walk by in a pressed white shirt on his way to work at the White House Department Store in downtown El Paso and Vicenta would say, I would love to meet that man…and I am going to get him.

Vicenta got her wish and, although it took nine years before José could afford to marry, they walked down the aisle of Immaculate Conception Church on Campbell Street in 1939. When a friend and I recorded José’s oral history in 2006, he showed us the carved box he gave Vicenta as a wedding present when they returned from their honeymoon in Mexico. The Juárez Lions Club had a magazine and paid him 400 pesos for a series of historic illustrations, enough for the trip and the gift.

José's home was filled with things that brought back memories, and he was always eager to share them. A worn scrapbook, loosely bound, contained old covers from magazines he bought at Juárez book stands. From them he learned about gauchos in Argentina, bull-fighting in Peru, and the history and costumes of Spain. He loved the articles and photos, and knew the illustrators by name. Early covers for Mexican magazines with his own illustrations were laid in the scrapbook, too, but his effusive words were reserved for the pictures that inspired him. Narrow steps led to a small basement where José would draw at night when he was younger and where he rested as he grew old. At times when I dropped by, I would startle him when I touched his shoulder as he dozed on his bed. A black-and-white photo of a streetcar with painted coats of arms hung on a wall downstairs, a reminder that José worked as a bus painter for much of his life, starting when the El Paso Electric Company transported Fort Bliss soldiers during World War II. At night, he would study books about heraldry, learning symbols and mottos of noble families in medieval times. Once he asked his boss if he might design crests for the states along the U.S.-Mexico border and paint them along the sides of the streetcars. José enjoyed his work very much when his boss said yes and the company bought the paint.

Any extra money José could save was used to buy books, sneaking them down the stairs when Vicenta wasn't looking. With five daughters, there were always needs for the household, but nothing could deter him. He said that, in a way, he traveled through reading them and looking at the pictures. They were filled with Spanish subjects, Arabian horses, and types of bits and saddles. José used them as research and shared them when the Oñate sculpture was being created for the El Paso airport.

Often, when sharing his books with others, letters would fall on the floor that had been stuffed between the pages. There had to have been thousands of them, especially if you counted those in boxes stored behind the house. One was framed beneath the National Humanities Medal given to him by the President of the United States, near other awards from leaders around the world. When the Spanish ambassador to the United States visited him last May, José told him that he was the first on the stage to receive his medal in Washington, D.C. and that the First Lady held his hand. He also announced that a very important man from Houston, one he had a letter from, had bought his sketches and books to take care of them and to share them forever with others. José’s daughter, Irene, redecorated the home she shared with her dad after his things were taken away. José enjoyed gluing magazine pictures into new scrapbooks, and he sometimes worked in the garden getting prickly pear to grow straight and tall. On one of my last visits to his home, José told the young woman I had met there that he mainly rested throughout the day, and that someday he would rest in peace. 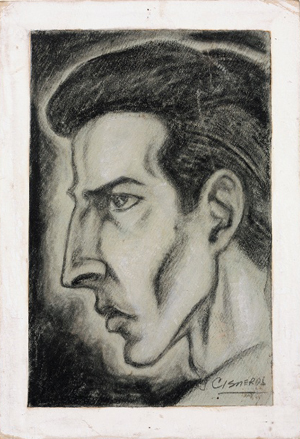 Self Portrait by José Cisneros. From the collection of John and Bobbi Nau, photo courtesy of Adair Margo Fine Art. 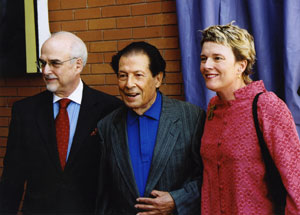 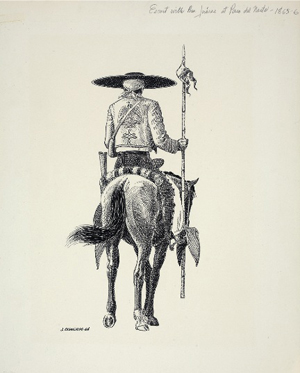 Escort with Pres. Juárez at Paso del Norte, 1865–6 by José Cisneros. From the collection of John and Bobbi Nau, photo courtesy of Adair Margo Fine Art.