Whenever Maceo C. Dailey Jr. walked into a room, his graceful stride gave evidence of his earlier years as a star basketball player in Baltimore. The athlete who became a scholar retained not only his fluid motion, but also the values of his demanding sport: a respect for others and a belief in the importance of teamwork, diligence, and maintaining focus on a basic objective. With his enduring commitment to those values, Maceo's presence on any team was a game-changer.

Then-Governor George W. Bush appointed Maceo Dailey to the Humanities Texas board in March 2000, a pivotal time in the organization's history. After the departures of the respected longtime executive director and his successor, who lasted only two years, a third director was discharged. Several board members resigned, and the entire organization could have disintegrated at that point. But Maceo's skillful diplomacy helped mollify conflicts and restore unity. He subsequently chaired the search committee to recruit a new executive director. Maceo's soft-spoken confidence and his obvious moral authority led me to accept the assignment despite the organization's recent history of instability.

Once I joined the staff, I marveled at Maceo's leadership skills as vice-chairman and then as chair of the board. He possessed a remarkable talent for neutralizing fractious personalities and promoting consensus among different viewpoints. He also curtailed board members' interference with the staff's daily operations.

It was Maceo's vision fixed on an important goal that transformed Humanities Texas. He developed the idea of selling our office condominium five miles south of downtown Austin and buying an historic building in a prominent central location. Without pressing too hard or too fast, he gently advanced his idea until it caught on. His sense of timing was impeccable.

While most gubernatorial appointees to our board serve a maximum of three two-year terms, Maceo was reappointed so many times that by the time of his death on October 11, he had served a record fifteen years. In addition to being our longest-serving board member, he was also one of the most popular, beloved by the entire staff and our board of civic leaders and scholars. A reliable participant at virtually all of our gatherings, Maceo inevitably brought fresh ideas, encouragement, and good will. He took time to visit with everyone, listening attentively, sharing news of mutual friends, telling amusing self-deprecating stories, and offering thoughtful reading suggestions. All of us in the Humanities Texas family will miss this gentle leader, but his influence and memory will always remain with us.

We at Humanities Texas were deeply saddened by the loss of Maceo C. Dailey Jr., who passed away in his hometown of Baltimore, Maryland, on October 11, 2015. Nearly twenty years ago, Maceo became the first director of the African American studies program at The University of Texas at El Paso. A scholar and devoted teacher, Maceo was also an esteemed community leader in El Paso and beyond. He acted as a member of the advisory committee for the Bullock Texas State History Museum; the chair of the McCall Neighborhood Center; and a board member of the Twelve Travelers Memorial of the Southwest, the Texas Emancipation Juneteenth Cultural and Historical Commission, the Child Crisis Center of El Paso, and the El Paso Symphony. Maceo was a member of the Humanities Texas Board of Directors from 2000 to 2015, serving two terms as chair. Below are remembrances shared by Maceo's family, friends, and colleagues after his passing earlier this month.

Diana Natalicio, President, The University of Texas at El Paso

"On behalf of our entire UTEP family, I am honored to join others in paying tribute to our beloved and highly esteemed colleague and friend, Dr. Maceo Crenshaw Dailey Jr.

We all have many treasured memories of the ways in which Maceo Dailey touched our lives. Mine began with his candidacy for the new position of African American Studies program director in 1996. After meeting Maceo, all of us were enthusiastic about inviting him to join the UTEP faculty, but, as part of my due diligence, I called my friend Dr. Johnnetta Cole, now director of the Smithsonian's National Museum of African Art and at that time president of Spelman College in Atlanta. Her response was immediate and definitive: 'Sister President,' she said, 'Maceo Dailey is the best you’ll ever find.' As always, Sister President Johnnetta got it exactly right! Maceo was indeed the best!

Another of my special memories of Maceo occurred at an event at the UTEP president’s residence during which we discovered our shared interest in baseball. Shortly thereafter, in his characteristically quiet and unassuming manner, Maceo presented me with a baseball signed by Hank Aaron, which has become a treasured addition to my collection and a lasting reminder of his thoughtfulness, kindness, and generous spirit.

So intellectually engaged, knowledgeable, and wise, Maceo Dailey made every conversation memorable. So unassuming and kindhearted, he was admired and loved by a broad range of students and colleagues across our campus and countless friends and neighbors across this community. His passing represents a huge loss for all of us."

"African-Americans have a long history in El Paso, particularly with the railroads and the military. Dailey made it his mission to make sure the African American experience was not lost when El Paso’s history and culture were discussed.

Dailey rediscovered an El Paso poet named Bernice Love Wiggins, who in 1925 published a book of poetry that had echoes of the Harlem Renaissance then taking place on the East Coast. Dailey and co-editor Ruthe Winegarten re-published Tuneful Tales in 2002, to bring Wiggins's work to a new audience.

Dailey and his wife Sondra unearthed another treasure when they found Boy of the Border, a collaboration by Harlem Renaissance figures Langston Hughes and Arna Bontemps from the 1930s that for some reason was never published.

The children's book was a coming-of-age tale of a twelve-year-old boy set during the Mexican Revolution. Maceo and Sondra Dailey published the book in 2010. That effort in many ways summarized Dailey’s efforts to bring a border-specific focus to a broader African American history.

'He was very much committed to the idea that the African American presence was always significant in El Paso and worked very hard to make sure people knew about that presence and understood the historical significance of that presence in the community,' said his friend and colleague Richard Pineda, interim chair of the communications department at UTEP."

"A true gentleman. distinguished scholar, valued friend, admired faculty member at The University of Texas at El Paso, and notable member of the El Paso community can all be said without reservation of Maceo Dailey. Coupled with this was his untiring and faithful support for Humanities Texas over many years as an active and perceptive member of our board."

Patricia D. Witherspoon, Dean of the College of Liberal Arts, The University of Texas at El Paso

"Dr. Dailey was an extraordinary mentor, teacher, and leader. When we discussed a possible new program or project, his opinion was always clear, cogent, and stated with both conviction and compassion. He had the gift of bringing diverse people together to talk about important issues of the day and do so in a civil manner. He was a role model for civility, for compassion, for articulate communication among all of our students. The College of Liberal Arts is saddened at the loss of a truly great man. Now it is up to us to honor him by celebrating his life and his work in ways that will help our students for years to come."

'He worked very hard every day to make UTEP the best place for each of his students,' said Selfa A. Chew, Ph.D., who serves as interim director of African American studies. 'They brought great plans to him, because they were confident he would support them all the way, as he did. He kept his door open for all visitors, greeting us and making us feel we were royalty. He helped us dream we had a place in academia and labored with us to achieve it. Even when his vision of the world did not match ours, he encouraged us with great passion to fight injustice, building bridges across diverse communities, never losing his great sense of humor.'"

Expressions from the Dailey Family

Our brother, Dr. Maceo Crenshaw Dailey Jr., who was affectionately known as "Crenshaw," was the first born of nine children to the late Maceo Crenshaw Dailey Sr. and Marguerite Britton Dailey. There were five sons (Maceo Jr., MacFarlane, Michael, Melvin, and Marvin) and four daughters (Myra, Millicent, Marcella, and Mitzi).   Crenshaw was our "Big Brother," whom we loved more than words can express. As the firstborn of the siblings, he was our fearless leader, mentor, and friend, and we were just blessed to have him in our family circle for seventy-two wonderful years.

The entire Dailey family has always been exceptionally proud of all he accomplished during his life. However, what all his siblings were also so proud and grateful for was how he always found a way to reach back and include us in not only his journey, but in sharing the fruits of those successes. He shared his life's experiences with us, often bringing the younger siblings and introducing us to academic communities and cultural experiences all over the nation, including those in Boston, Massachusetts; upstate New York; Atlanta, Georgia; and El Paso, Texas. Crenshaw was so much more to his siblings than just an older brother, as he taught us so many life lessons. As well, there were so many great family times and gatherings where we all expressed our love, had great laughs with him (he had a great sense of humor), and just bonded as only siblings can do. Later in life when his siblings were married and had their own children, he provided the same leadership, mentoring, and, most importantly, family love to his nieces and nephews.

While now there is a void that can never be filled after the death of our beloved "Big Brother," who throughout his lifetime made history, taught history, and now has become such a significant and indelibly huge part of our family's history, we will choose to remember all of the love we were able to share with him and express for him during his lifetime and take comfort that we believe that we will see him again. Maceo C. Dailey Jr. at a 2004 Humanities Texas board of directors meeting in San Antonio. 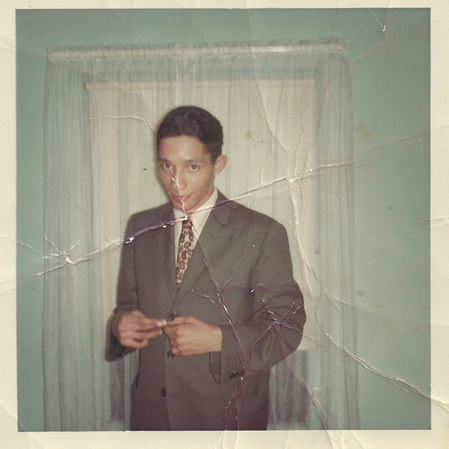 Maceo Dailey as a young man. Photo courtesy of the Dailey family. Maceo Dailey earlier in his academic career. Photo courtesy of the Dailey family. 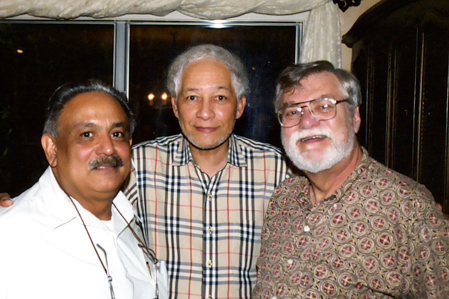 Rodolfo Rocha, Maceo Dailey, and Patrick B. Nolan at a reception for faculty at the 2004 "Institute on Congress and American History." 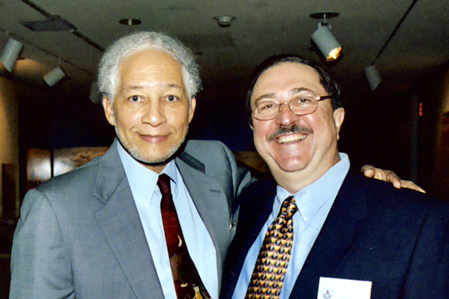 Maceo Dailey with Raymond W. Smock, former historian of the United States House of Representatives, at the "Institute on Congress and American History" in 2004. Former board chair J. Sam Moore Jr. and Maceo Dailey enjoy refreshments during a San Antonio board meeting in 2004. 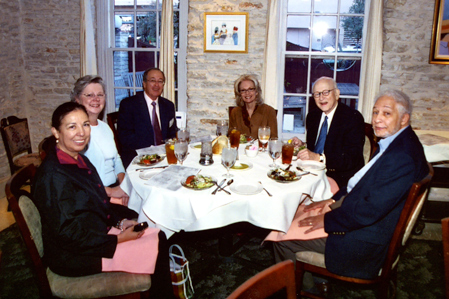 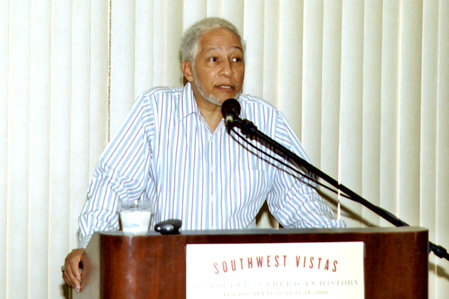 Maceo Dailey addresses the audience at "Southwest Vistas," the 2006 Humanities Texas teacher institute at The University of Texas at El Paso. Maceo Dailey and Kristine Navarro-McElhaney, former director of the Institute of Oral History at The University of Texas at El Paso. Maceo Dailey with Albert S. Broussard and his wife Mary Broussard at a board reception at the Byrne-Reed House. 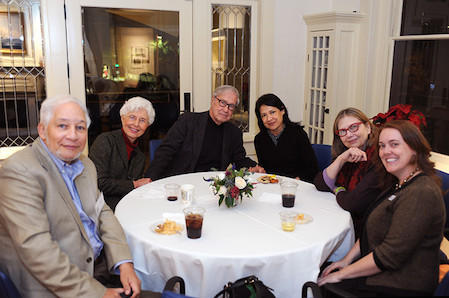 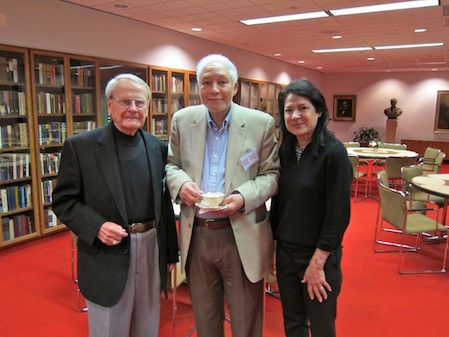 From left to right: former board chairs Sam Moore and Maceo Dailey with deputy director Yvonne González at the LBJ Presidential Library during Humanities Texas's fortieth anniversary celebration in 2013.