It was with great sadness that we at Humanities Texas learned of Miguel González-Gerth’s passing on June 20, 2017, at the age of ninety. An accomplished scholar and poet, he served on the Humanities Texas Board of Directors from 2007 to 2012. Below is a remembrance from Dave Oliphant, a colleague and friend of Miguel.

Miguel González-Gerth, a professor of Spanish at The University of Texas at Austin, was a student of and a practitioner of poetry both in his native Spanish and in his completely fluent English. Born in Mexico City in 1926, Miguel came to Texas to attend school at age eleven and eventually studied at The University of Texas at Austin before taking a PhD at Princeton. Apparently, Miguel first began writing poetry in English, and, as early as 1946, he demonstrated his mastery of the language with a poem entitled "To Spring: An Ode." Ten years later, in 1956, his first collection of poems appeared under the title Desert Sequence and Other Poems. The title poem, in three sections, ends with a final image from a summer view of the Big Bend country: "The sorrel mustang of morning / stamps upon hills, races through canyons, /sparks from its hoofs igniting / brush, cacti, sand and stone, / all in the desert silence." Subsequent volumes of Miguel's poetry would present poems written in English and Spanish, which he would then  translate into the other language, a practice that he continued for the rest of his writing career. In 2013, Miguel's poetry was gathered in a volume entitled Between Day and Night: New and Selected Poems 1946-2010, published by TCU Press, edited by David A. Colón, and including an interview with Miguel conducted by Professor Colón in the poet's Austin home.

I first came to know Miguel in 1976 when he was editing The Texas Quarterly, and, because he was a great champion of poetry, he invited me to write a review of a number of collections of poems that had been sent to the Quarterly, mostly by local Austin poets. For many years I had the privilege of working with Miguel at the Harry Ransom Center when I myself was editing the Center's journal, The Library Chronicle. We often exchanged views on poetry in his office at the Center, and I was always amazed by his wide reading. His own poetry pays homage to poets from Sappho to Ezra Pound, Philip Larkin, Federico García Lorca, Jorge Luis Borges, and Pablo Neruda. Much of Miguel's poetry is philosophical, as it delves into the meaning of the universe, time, destiny, and oblivion. His poems on departed loved ones can be simple but deeply moving. In a poem entitled "The Art of Poetry," he concludes that "Poetic art is soft as silk and cutting as a knife / And every poem a tender blow against the chains of life."

Miguel's poems on music and art reveal, as he says in a piece on the classical pianist Vladimir Horowitz, "The timeless in the heart of man." One of my favorite poems by Miguel is a well-observed piece on a common Austin bird, which comes from his 1991 collection entitled The Musicians and Other Poems. I offer this poem [to the right], entitled "Black on White," as but one example of the memorable music and imagery of Miguel's poetic art. 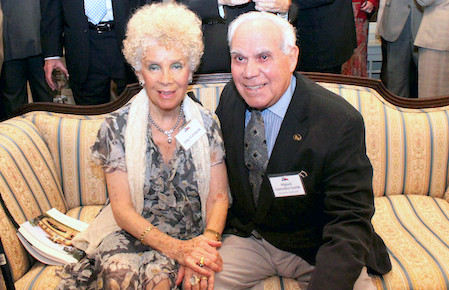 Miguel González-Gerth with his wife Tita Valencia at the grand opening of the Byrne-Reed House in 2010. 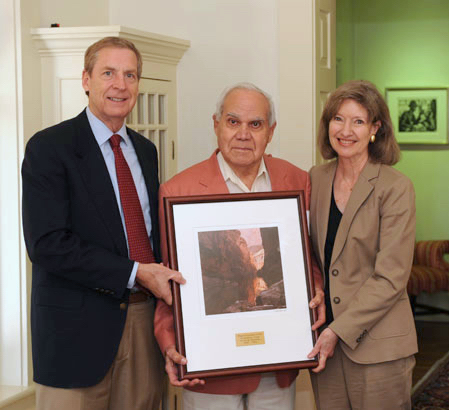 From left to right: Michael L. Gillette, executive director of Humanities Texas; Miguel González-Gerth with a signed photograph of the Santa Elena Canyon by Bill Wright; and Mary L. Volcansek, then-chair of the Humanities Texas board, in 2012.