We were deeply saddened by the passing of Dr. Randolph "Mike" Campbell in August. In addition to being a distinguished scholar and a beloved colleague, teacher, and mentor, Mike was also a generous collaborator. Over the past several decades, he served on the faculty of multiple Humanities Texas teacher programs and reviewed at least a dozen of our Texas Originals radio scripts to ensure they were up to date and referenced the most recent scholarship. Most recently Mike helped us develop the script of our forthcoming traveling exhibition on Sam Houston. In all of these efforts, Mike raised the quality of our work with his incisive intelligence and expansive knowledge of Texas history. We will miss him greatly.

Mike's obituary appeared in the Denton Record-Chronicle on August 17, 2022. We have reprinted it with permission here.

Randolph B. "Mike" Campbell, proud native Virginian and the dean of Texas historians, died on August 13, 2022.

Born in Charlottesville, Virginia, on November 16, 1940, Campbell grew up on a hardscrabble farm in Nelson County, Virginia, the only child of John Landon and Virginia Lyon Campbell. He attended the University of Virginia, where he earned his PhD in history in 1966. In 1962, he married Diana Snow and together they raised two sons, James Landon and Jonathan Clay.

Mike and Diana moved to Denton, Texas, in 1966, when Mike took a position in the history department of North Texas State University (now the University of North Texas). During the fifty-three years that followed, Campbell became one of the most prominent faculty at UNT, where he held both the Regents Professorship and the Lone Star Chair in Texas History when he retired in August 2019.

Campbell's prominence centered on his pathbreaking work on the southern heritage of Texas and his focus on exploring the lives of everyday people living through momentous times, which transformed how modern historians understand the Texas past. His first book, A Southern Community in Crisis, became such an iconic work on the Civil War that it was reissued thirty years after its original publication. Even more influential was An Empire for Slavery, which traced the deep influence of slavery in the development of nineteenth-century Texas and remains the most authoritative work on the subject. His numerous other works—including books on the life of Sam Houston and the era of Reconstruction, as well as dozens of scholarly articles—culminated in the publication of Gone to Texas, the most authoritative one-volume history of Texas that today is in its third edition and serves as a standard in college classrooms.

For his many achievements, he was honored by his colleagues with numerous awards and a series of influential positions in historical associations and societies. He served as president and inaugural chief historian of the Texas State Historical Association (TSHA), as well as editor of the Association's Southwestern Historical Quarterly (the preeminent journal of the American Southwest). He was a fellow of the TSHA, the Texas Philosophical Society, the Texas Institute of Letters, and the East Texas Historical Association, among others. The University of North Texas bestowed the Eminent Faculty Award on Campbell in 2012.

Yet Campbell's greatest legacy may have been his teaching and mentoring. Virtually no one could hold a lecture hall in rapt attention like Campbell, and his massive sections of U.S. history were frequently oversubscribed with eager students. His local history seminars and famous biography classes were must-take courses for graduate students. Throughout his career, moreover, he selflessly offered his time, insights, and support to students, colleagues, and friends, always working in tireless dedication toward helping others achieve their best.

He was preceded in death by his wife, Diana, and is survived by his sons, Landon and Clay, and his three grandchildren, Flynn Landon Campbell, Wylie Lachlan Campbell, and Evy Gracyn Campbell. 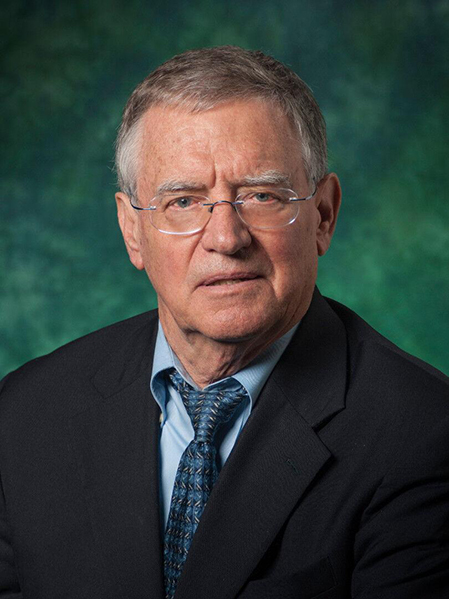 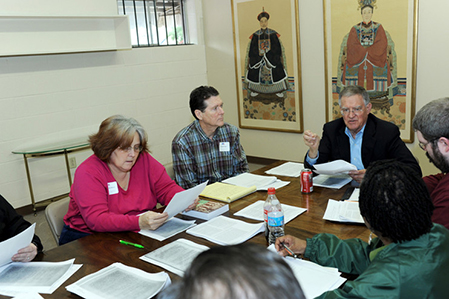 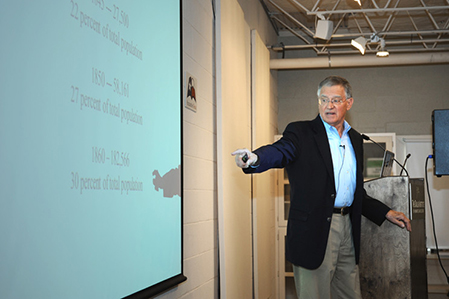 Mike Campbell presents on slavery in Texas at the "Texas Before Statehood" workshop.