We were saddened to learn that former Humanities Texas board member Patrick B. Nolan passed away at his home in Huntsville on January 19. He had had a massive heart attack in November. Patrick served on the Board of Directors from 1999 to 2004. All of us remember him with esteem and affection. He was a thoughtful, congenial scholar who was dedicated to making history accessible to the public. During his tenure, he chaired the awards committee for two years and the grants committee for three, presiding in a collegial, judicious manner that inspired courtesy and consensus in the deliberations.

By popular demand, he remained a member of the grants committee for two years after his term on the Humanities Texas board expired. During Patrick’s chairmanship, Humanities Texas initiated the popular mini-grants program. He also served on the search committee to recruit an executive director in 2003.

Patrick graduated from Southwest High School in Minneapolis and attended Carleton College in Northfield, Minnesota, where he met Bobbe Ann Shapiro at a square dance. Because Carleton did not then permit students to be married, he transferred to the University of Minnesota, where he completed his BA, MA, and PhD in American history. During graduate school summers he proudly served as a seasonal park ranger historian at Mt. Rushmore, the Lincoln Birthplace National Historic Site, and Glacier National Park.

Patrick taught American history and administered archives and special collections at University of Wisconsin-River Falls and at Wright State University in Dayton, Ohio, where he developed a graduate program in public history. He was a founding member of the Midwest Archives Conference and the Society of Ohio Archivists, and spent a year in Washington, DC, with the Council on the Humanities. He organized exhibitions and published on the Wright Brothers and the documentation of early flight. After a brief period at The Hagley Museum in Wilmington, Delaware, he became the director of Huntsville’s Sam Houston Memorial Museum in 1992. He delighted in costumed re-enactment and actually being paid for firing guns and throwing tomahawks. During this time he made seventeen trips with the American Orient Express excursion train as a guest lecturer, bragging that this was "the best boondoggle ever." He officially retired from Sam Houston State University at the end of 2011.

Dr. Nolan was active at St. Stephen's Episcopal Church, Huntsville Rotary, United Way of Walker County, the Texas Prison Museum, the Chamber of Commerce, the Forest Trail, Raven's Rangers, and other efforts to promote the university, the museum, and Huntsville. He was proud to be an honorary member of the Sons of the Republic of Texas and to have served on the board of Humanities Texas. He believed intensely in the value of liberal arts education, railroads, and wilderness. Predeceased by his parents, aunts and uncles, and son Patrick Thomas Nolan, he is survived by Bobbe, his wife of forty-nine years, son Philip George Nolan and wife Kristi of Eagle Lake, Texas, granddaughters Catherine Allen Nolan and Rachel Reminder, sister Kathleen Dypwick (Jeff) of Chaska, Minnesota, and nieces Ann and Lisa Dypwick of Bastrop, Texas.

Funeral services will be held at St. Stephen's Episcopal Church on Monday, January 30, 2012, at 1:00 p.m. Following the service, the family will receive visitors at the Katy and E. Don Walker Education Center on 19th Street from 3:00 to 5:00 p.m. In lieu of flowers, please consider joining the Friends of the Sam Houston Memorial Museum, or making a contribution to the Sam Houston Folk Festival or to the Rotary Water Well Program. Patrick Nolan represented the Sam Houston Memorial Museum at the luncheon for NEH Chairman Jim Leach at the Byrne-Reed House on October 29, 2010. 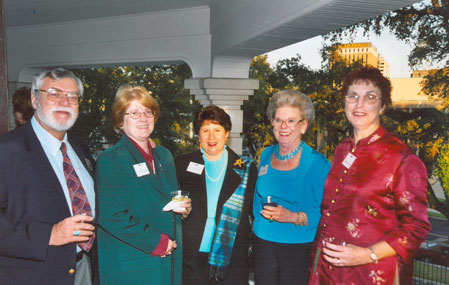 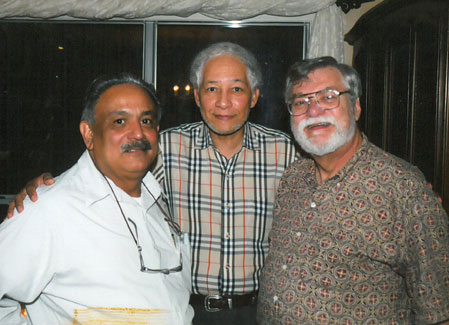 Rodolfo Rocha, Maceo Dailey, and Patrick Nolan at a reception for presenters at the 2004 institute on Congress and American history.