Robert C. Vaughan led the Virginia Foundation for the Humanities [VFH, renamed Virginia Humanities in 2018] from its founding in 1974. Throughout his long and brilliant career, he combined a scholar's intellect with the creativity and inspirational leadership of a visionary executive. Year after year, Rob's Virginia council pioneered a succession of remarkable programs and activities to enrich the lives of all Virginians through the humanities. In doing so, he and the Virginia council repeatedly provided the other state humanities councils with valuable models of innovative programming. In turn, Rob consistently and graciously declared his debt to the other councils for the good ideas these organizations shared. In that way, Rob was not only a leader among the councils but also an exemplar of the collegiality, generosity, and creativity of the remarkable national network of state humanities councils.

Rob's groundbreaking programs began early in the council's history. In the 1980's, the VFH embarked on a significant women's history project, "A Share of Honor: The Virginia Women's Cultural History Project." Co-chaired by then-First Lady Lynda Johnson Robb and Helen Bradshaw Byrd, the statewide initiative was designed to "recognize the extraordinary contributions of women in the Old Dominion." By the time the project concluded in 1985, it had engaged thousands of Virginians in a dazzling array of programs including exhibitions, performing arts, symposia, lectures, and media presentations. It remains the most substantive and far-reaching public program that has ever been done in the state on this subject, and it provided an early example of the council's willingness, under Rob's leadership, to take on topics that others were not yet discussing.

In the state council community, Rob was regarded as a guru, pointing the way in a wide variety of areas, encouraging everyone to constantly look at new possibilities. He was an acknowledged leader in securing state funding, as well as foundation grants. He and his staff consistently broke new ground in programming, taking on ambitious statewide initiatives, surfacing previously untold stories of marginalized populations, and creating their own radio programs and podcasts.

The Virginia Folklife Program, launched in 1989 as another example of Rob's visionary leadership, was "dedicated to the documentation, presentation, and support of Virginia's rich cultural heritage." A remarkable component of the Folklife Program was its apprenticeship program, which continues to today, teaming a master in a particular folklife tradition with a younger student for training to help transmit and maintain the history and practice of that tradition.

The council under Rob's leadership made a special effort to preserve and bring to public awareness the histories of communities whose stories had been overlooked or hidden for decades. The Virginia Indian Heritage Trail has educated thousands of Virginians and visitors to the state about the history and cultures of the Virginia Indian peoples. A special aspect of this initiative is its emphasis on the lives of "the Indians among us," helping to convey Indian culture as a dynamic, living experience, not merely a historical relic, and in the process promoting a program of both education and advocacy on behalf of issues affecting the Indian community. Similarly, the African American heritage programs have brought to light thousands of untold stories from this community's history, while also exploring contemporary challenges and triumphs.

Rob's VFH also launched an impressive range of scholarly programs such as fellowships, lectures, and digital documentary publications. At the same time, he and his staff devised creative ways to make humanities scholarship both accessible and engaging to broad public audiences. The digital Encyclopedia Virginia and two public radio programs, With Good Reason and the wildly popular Back Story, are prime examples.

Throughout all those years of stunning accomplishments, Rob was unfailingly generous in providing information and advice based not just on Virginia's successes but also their challenges. At the same time, he was been unstinting in his praise for the achievements of his colleagues in other states.

His commitment to the humanities extended beyond just the council community. Rob also had an unflagging commitment to the unity of the entire humanities community. He was one of the founders of the National Humanities Alliance and a long-time board member, including terms as both treasurer and chair. Throughout his career, Rob objected to the bifurcation of the academic and the public humanities, arguing strenuously that it was all one. He quietly persisted in efforts to unify, believing that we were stronger together and that the need for a central role for the humanities in our society was much too important to allow for useless definitions and destructive divisions. The joint conferences the Federation and the National Humanities Alliance launched in 2016 are in part a tribute to Rob's leadership and will be one of many facets of his incredible legacy.

In retrospect, I see that one major key to Rob's success was evident in the first one-on-one conversation I had with him on a trip I took to Charlottesville early in my time with the Federation to spend time with him and his remarkable staff. I had been on the job for a month and knew almost nothing about anything, but you wouldn't have known that watching the cordial respect with which Rob inquired about my background, my experiences, my thoughts on a wide range of topics. One of the busiest people on the planet appeared to have all the time in the world.

I subsequently learned that many, many people had had that experience and that it in no way meant that the careful attention I received from Rob was insincere. It just meant that to Rob, everyone was special, every perspective worth listening to. This genuine interest in others and in the world around him enabled him to absorb a prodigious amount of information; his intelligence and vision allowed him to put that information to the best possible use.

Over several decades, Rob generously offered valuable insights, experiences, and words of encouragement to the staffs and boards of councils aspiring to replicate Virginia's many successes. All the other fifty-five state humanities councils—and ultimately, communities throughout the nation—have benefited enormously from Rob Vaughan's remarkable achievements. 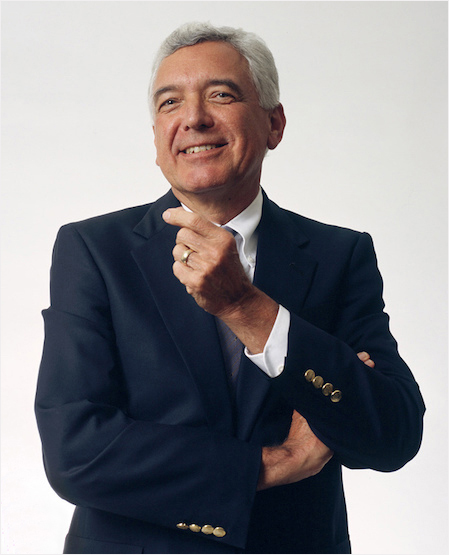 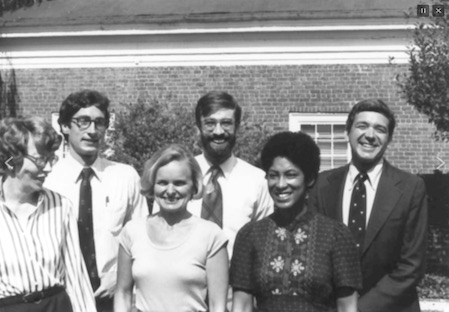 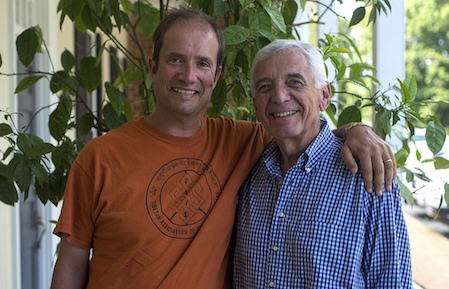 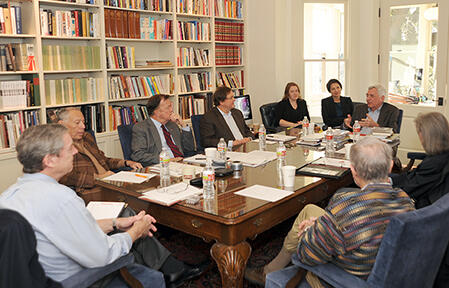 Rob Vaughan meets with Humanities Texas board members and staff at the Byrne-Reed House, 2011. 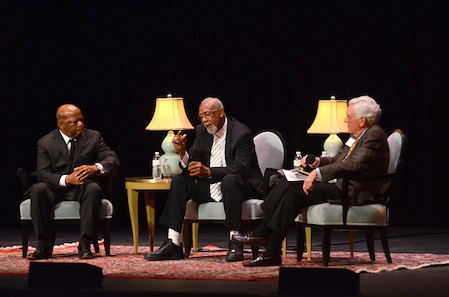 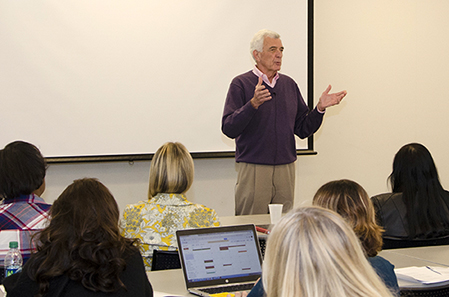 Rob Vaughan gives a lecture on Edgar Allen Poe at a Humanities Texas workshop on teaching poetry in Houston, December 6, 2016. 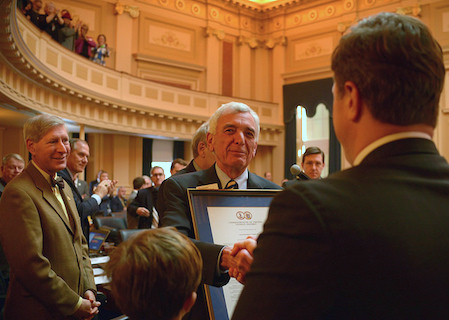