During women's history month, it is fitting that we pay tribute to the activist, teacher, and leader who led Texas women's final struggle for the right to vote. Minnie Fisher Cunningham, or "Minnie Fish" as President Franklin Roosevelt would nickname her later in life, was born in New Waverly, Texas, in 1882; by 1901, she had become the first woman in Texas to receive a degree in pharmacy. But she spent merely a year working as a pharmacist. The inequality in pay between male pharmacists and herself turned Cunningham's attention to women's rights. She would go on to guide the suffrage movement in Texas to its successful conclusion.

When Cunningham became president of the Texas Woman Suffrage Association (TWSA) in 1915, after five years heading the Galveston branch, her first goal was to pass a Primary Election Bill that would allow women to vote in primaries. Governor James Ferguson opposed women's suffrage and squarely blocked the TWSA's efforts. When he was indicted on embezzlement and other charges in 1917, Cunningham joined the efforts to impeach him. She saw an opportunity not only to remove her biggest political obstacle to women's suffrage in Texas, but also to prove the worth of women in the political arena. She wrote to Carrie Chapman Catt, president of the National American Woman Suffrage Association, about her success with the campaign on July 31, 1917: "We came into the campaign just at the time when everybody was worn to a frazzle and feeling discouraged and beaten; and our interest and enthusiasm and the immediate success of our first bits of work seemed to put new life and vigor into the men who were working. . . . Perhaps we can prove to them they need us even if they do not want us!"

Ferguson was impeached a month later. The TWSA's work toward the impeachment garnered increased political connections and a higher public profile. Cunningham believed at that moment that there were more Suffragists in Texas than ever before. She wrote to Catt, "[I]t has been a full six weeks since I have found any man with the temerity to look us in the eye and say he opposed women's voting in the face of the outrageous condition that has been proven to prevail in our state government." The impeachment had publicly confirmed corruption in the government, which only bolstered Cunningham's success.

Ferguson's successor as governor, William P. Hobby, was a sympathetic to the cause. Cunningham now had a powerful source of potential support for the Primary Election Bill. She turned all her efforts to getting the bill into 1918's legislative special session, even asking Catt to send a letter from President Wilson to Hobby urging its submission. She also led the organization of a coalition of women's and labor groups and a primary suffrage petition. Hobby submitted the bill when the session opened in March 1918, and it passed both the Texas House and Senate within the week. When the vote was taken, "we rose to leave the gallery of the House," wrote Cunningham, "and when the men saw us they all stood up and gave us a perfect ovation, cheering for some minutes and calling for a speech."

The Primary Election Bill was a big step forward, but it was only the first. Minnie Fish and the TWSA spent the next year lobbying their federal representatives to vote in support of the 19th Amendment. In June 1919, both Texas senators and ten of the state's eighteen House members voted in support of the federal suffrage amendment. Within the month, Texas became the first state in the South to ratify it.

Cunningham went on to help found the National League of Women Voters and acted as its first executive secretary. In 1928, she became the first Texas woman to run for the U.S. Senate. Cunningham worked in support of liberal causes and the Democratic Party for the rest of her life, including positions under President Franklin Roosevelt’s administration and managing the New Waverly campaign headquarters for John F. Kennedy. But no achievement should be so celebrated as Cunningham's contribution to Texas women's suffrage. Send a little thought of thanks to Cunningham the next time you or a woman close to you votes. 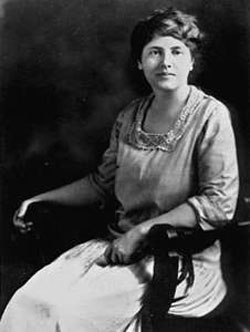 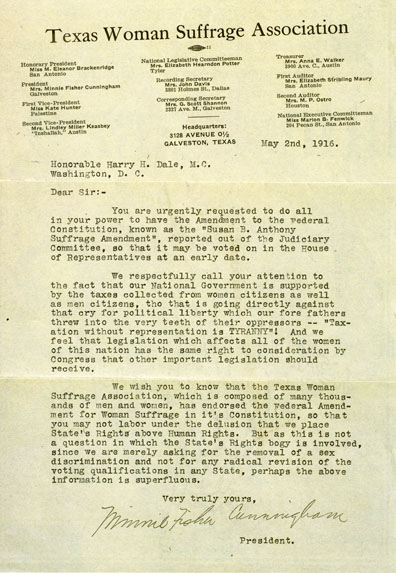 Petition from Minnie Fisher Cunningham of the Texas Woman Suffrage Association for passage of the Susan B. Anthony Amendment. May 2, 1916. Document courtesy of the Foundation for the National Archives.