As we approach the 2012 election season, consider bringing the exhibition Running for Office: Candidates, Campaigns, and the Cartoons of Clifford Berryman to your venue. This exhibition is available for rent through the Humanities Texas traveling exhibitions program. Book now to reserve this exhibition for 2012!

The Running for Office exhibition, offered through Humanities Texas, includes forty-four facsimile prints of exceptional pen-and-ink drawings that highlight timeless aspects of the American campaign and election process. Although faces and personalities change, Berryman’s cartoons illustrate how the political process in our democracy has remained remarkably consistent. The cartoons provide relevant commentary and fascinating insight into the campaigns and elections of today.

President Harry S. Truman, the Democratic presidential nominee in the election of 1948, was widely forecast to lose by a large margin to Republican nominee Thomas E. Dewey. The cartoon to the right shows the prevailing public opinion of the time, just days before the election took place. Despite several polls predicting a landslide victory for Dewey, Truman won the election in one of the biggest political upsets in U.S. history.

Clifford Berryman, staff political cartoonist for The Washington Post and the Washington Evening Star during the first half of the twentieth century, drew thousands of cartoons commenting on presidential and congressional candidates, campaign issues, and elections of his era. Berryman was a Washington institution, and his fifty-three years of front-page drawings were internationally renowned. Throughout his extraordinary career he drew every presidential administration from Grover Cleveland to Harry S. Truman. He satirized both Democratic and Republican political figures but was able to critique without rancor, which won him great respect from many politicians.

Berryman often used bees in his cartoons to symbolize the "buzz" of ambition in a politician's ear. In this cartoon, Theodore Roosevelt, who had promised to honor the two-term tradition, decided to run for a third term in 1909 at supporters' urging. In this cartoon, Roosevelt, dressed as Hamlet, recites a parody of Hamlet's famous soliloquy. With bees in this cartoon standing in for terms, Roosevelt muses, “Two bees or not two bees—that is the question!” 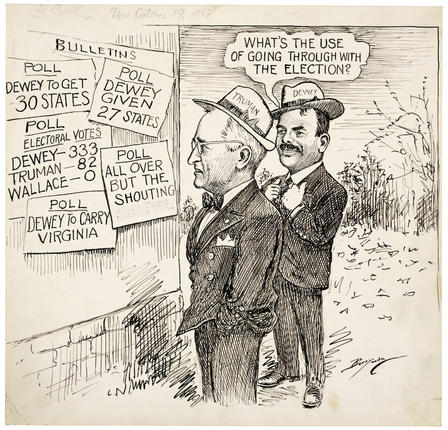 "What's the Use of Going Through with the Election?" by Clifford Berryman, October 19, 1948. U.S. Senate Collection, Center for Legislative Archives. 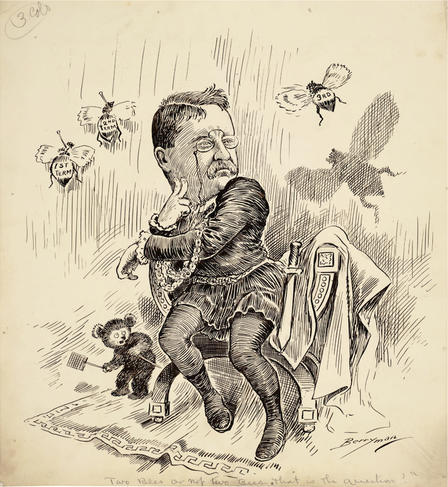 "Two Bees or Not Two Bees: That is the Question!" by Clifford Berryman, October 19, 1948. U.S. Senate Collection, Center for Legislative Archives.