Request for Proposals: “Making Sense of the Civil War”

In recognition of the sesquicentennial of the Civil War, Humanities Texas is pleased to request mini-grant proposals from Texas libraries, museums, and other cultural and educational institutions for reading and discussion programs focusing on the war and its legacy. Programs should be scheduled during 2012.

Applicants are encouraged to design programs that make use of the following reading materials, which Humanities Texas will loan to grantees at no cost:

• Making Sense of the Civil War, an anthology of readings edited by noted historian Edward L. Ayers. The anthology includes an array of short readings related to the war, its causes, and its significance in American history, including Frederick Douglass’s “What to the Slave is the Fourth of July,” Henry David Thoreau’s “A Plea for Captain John Brown,” Abraham Lincoln’s first and second inaugural addresses and the Gettysburg Address, and excerpts from Margaret Walker’s Jubilee and Shelby Foote’s Shiloh.

• Crossroad of Freedom: Antietam, James M. McPherson. McPherson’s concise and accessible account of the Civil War battle at Antietam argues that the battle was a pivotal moment not just in the war but also in U.S. history.

The maximum award per applicant is $1,500. Partial awards are possible. Humanities Texas will loan as many as twenty-five sets of the reading materials listed above to grantees that have designed programs to make use of them.

Programs must be conducted in a spirit of open and informed inquiry. Humanities scholars must play an active role in their conception, design, and execution. Programs must be free and directed primarily to the general public outside of the regular school or college classroom.

Humanities Texas will accept applications on a rolling basis. Programs must take place during 2012.

Please use the Humanities Texas mini-grant application forms. Guidelines, forms, and complete instructions are available on the Grants page.

Please contact Eric Lupfer, Director of Grants and Education, at (512) 440-1991 or elupfer@humanitiestexas.org.

This request for proposals is made possible by the National Endowment for the Humanities We the People initiative.

This Request for Proposals is also available for download: .pdf 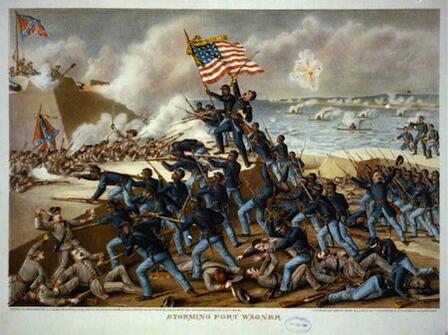 Kurz and Allison, The Storming of Fort Wagner, 1890. Library of Congress Prints and Photographs Division.