In 1974, the University of Virginia's president asked Robert C. Vaughan III, a young PhD candidate, to create and lead a new state humanities organization. Rob took on the assignment and then devoted his entire forty-three-year career to his creation, now named Virginia Humanities (formerly the Virginia Foundation for the Humanities). His cordial personality, sparkling wit, and marvelous stories attracted many friends and supporters, while his wealth of experience and ambitious program initiatives set a high bar for the other state humanities councils.

Rob's expertise benefitted Humanities Texas in multiple ways. His wildly successful Back Story radio program provided the inspiration for our Texas Originals series. He served on the faculty of our professional development programs for classroom teachers and participated in our fortieth anniversary program. Rob also consulted with our board of directors for two days in 2011 when we launched our endowment campaign. His guidance has proven invaluable.

Rob Vaughan's passing on March 3, 2019, brings into focus the very special fraternity he and the other long-serving executive directors comprised. While Rob's tenure spanned four decades, other humanities executives also devoted lengthy professional careers to the state councils. Marion Cott led the Kansas council from its beginning in 1972 until 2006, a total of thirty-four years; Kristina Valaitis devoted thirty-six years to the Illinois council; David Tebaldi headed the Wyoming council in the 1980s before serving in the same capacity in Massachusetts, a combined thirty-six years. Robert Cheatham directed the Tennessee humanities council for thirty-four years, while Jamil Zainaldin presided over the Georgia council for two decades after leading the Federation of State Humanities Councils for a decade. Bruce Fraser served the Connecticut council for thirty-three years, including twenty-eight as director; Cynthia Buckingham recently retired from the Utah council after thirty-six years.

The friendships that emerged among these extraordinary veterans have been as remarkable as the directors' lengthy tenures. The National Humanities Conference provided annual opportunities for the state council directors to get together on long weekends to share experiences, swap stories, plan collaborative projects, and enjoy each other's company. They also imparted invaluable counsel to their rookie counterparts from other states. While I have benefited tremendously from their wisdom, I have valued their friendship even more. And none more than Rob Vaughan's. 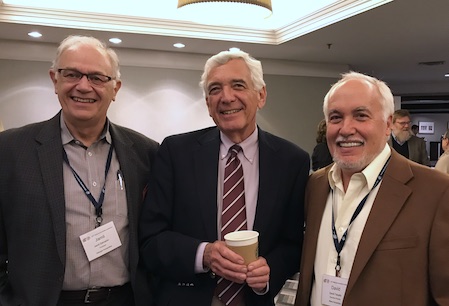 Rob Vaughan (center) with Jamil Zainaldin and David Tebaldi at the 2017 National Humanities Conference in Boston. James Quay (left) and Jim Veninga at the October 1989 meeting of the National Task Force on Scholarship and the Public Humanities.

A Conversation with Council Directors

Veteran executive directors Rob Vaughan, Jim Veninga, Jamil Zainaldin, Kristina Valaitis, and Marion Cott came to Austin in 2013 to attend Humanities Texas's fortieth anniversary program and participate in a conversation on the history of the state humanities councils. Readers can watch the program in full in the January 2014 issue of our e-newsletter.