"Honestly, this is the best workshop I've ever attended," exclaimed a teacher who attended the "Shaping the American Republic to 1877" teacher institute held in Laredo last month. "Professional development workshops should inspire, teach, offer interaction, and provide ways to bring knowledge back to the classroom and students . . . . This went beyond my expectations!"

This teacher's comment is typical of the enthusiastic responses Humanities Texas received from the 242 teachers who participated in "Shaping the American Republic," a series of six teacher institutes held around the state last month.

All teachers attended at no cost to themselves or their schools. In addition to earning Continuing Professional Education credit, participants received a $300 stipend, travel expenses, and a wealth of instructional materials.

Each institute explored topics from the Colonial Era through Reconstruction that are central to Texas' eighth-grade social studies curriculum. Particular emphasis was placed on topics and themes stipulated by state's curriculum standards, such as the factors that encouraged European exploration during the Colonial Era; the challenges confronted by the American government and its leaders in the early years of the Republic; the effects of westward expansion on the political, economic, and social development of the nation; and the causes of the Civil War.

Institute participants had high praise for the institute faculty and appreciated having the opportunity to work with them in such an intimate setting. "Being able to speak candidly and professionally with the faculty and receive insight on how to teach certain topics was very effective," noted a teacher who attended the Laredo institute.

An El Paso participant concurred. "I especially enjoyed talking to all the wonderful professors, historians, and speakers. The one-on-one, even during lunch, gave me renewed energy and inspiration to go back to the classroom and teach."

The institutes featured keynote presentations from widely known and respected scholars. H. W. Brands, a two-time finalist for the Pulitzer Prize for History, opened the Austin institute with a public lecture on the life and times of Benjamin Franklin. In El Paso, Pulitzer Prize-winner Gordon S. Wood explored the history of the early Republic in his keynote address, "Empire of Liberty," which closely followed his recent book of the same name.

Alan Taylor launched the Fort Worth institute with his keynote address "From American Colonies to American Revolutions." Taylor received the Pulitzer Prize for History in 1996 for his book William Cooper's Town: Power and Persuasion on the Frontier of the Early American Republic.

In Houston, Peter S. Onuf, the Thomas Jefferson Foundation Professor at the University of Virginia and a cohost of the popular radio show BackStory, spoke on Jefferson’s America. In Laredo, Lorri Glover, the John Francis Bannon S.J. Professor of History at Saint Louis University, discussed recent scholarship on the American colonial period.

On the opening night of the San Antonio institute, Daniel Feller, University of Tennessee historian and the editor and director of The Papers of Andrew Jackson, examined Andrew Jackson’s presidency and his place in popular memory.

In their program evaluations, teachers emphasized that the faculty's expertise resulted in a program with uncommon intellectual rigor and depth. As one Houston attendee wrote, "For the first time in all of my years of teaching, I was challenged to think beyond the level of textbook information. I plan on using more primary documents in the classroom to encourage my students to ask themselves questions and research for their answers."

Profiles and photos of all participating scholars were featured in our May newsletter.

In addition to its rich content-based curriculum, "Shaping the American Republic" provided teachers with the opportunity to learn about the wealth of resources available at the state's leading cultural institutions. In San Antonio, teachers toured the Institute of Texan Cultures with the ITC's educational specialists. Houston participants explored the Museum of Fine Arts, Houston. Fort Worth attendees visited the Amon Carter Museum of American Art, the National Cowgirl Museum and Hall of Fame, and the Fort Worth Museum of Science and History, and teachers attending the Austin program learned about the many resources available at the Lyndon B. Johnson Library and Museum.

Until 2010, Humanities Texas had held no more than two teacher institutes each summer. The ambitious scope of "Shaping the American Republic" was made possible with Humanities Texas's first-ever state legislative appropriation.

Cognizant that the quality of teachers is a critical factor in student achievement, Lieutenant Governor David Dewhurst initiated an expansion of the Humanities Texas teacher enrichment program with state funding in 2009. Through his leadership and the support of Speaker Joe Straus and Representative Mike Villarreal, the Texas Legislature appropriated funding for an expanded program with an emphasis on new teachers in low-performing schools.

Humanities Texas responded to the challenge, actively recruiting teachers in the target population throughout the state. In all, teachers from thirty-one of the state's thirty-two U.S. congressional districts attended the program. Fifty-nine percent were in their first five years of classroom service, and nearly half came from schools or districts that had been designated "academically unacceptable" at some point in the past five years.

In their program evaluations, many participants emphasized that the institutes provided crucial training for early-career teachers. As one El Paso participant wrote, "As a fairly new teacher, I found the information very useful to me, and to see master teachers and faculty lecturers sharing a few of their trade secrets made the experience that much more valuable."

Other participants stressed the importance of meeting and working with colleagues from around the state. As one San Antonio participant wrote, "One of the best things for me at the institute was simply talking to other teachers during the breaks and in the evenings. Talking to the other teachers who share my love for students and social studies helped me. We were able to swap some ideas, and more importantly, exchange information so we can keep an open dialogue."

"Shaping the American Republic to 1877" was made possible with support from the State of Texas as well as from the National Endowment for the Humanities We the People initiative. Additional funding was provided by the Albert and Ethel Herzstein Charitable Foundation, the Philip R. Jonsson Foundation, and the George Butler Foundation.

Humanities Texas and our partner institutions will hold follow-up programs over the course of the 2010–2011 academic year, allowing the teachers who participated in the summer programs to extend and enrich their training. The group of teachers who attended the institute at Texas Christian University in Fort Worth. All photos on this page by Humanities Texas unless otherwise noted. Humanities Texas board member Albert S. Broussard speaks about slavery in Fort Worth. 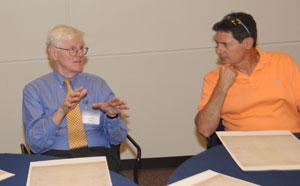 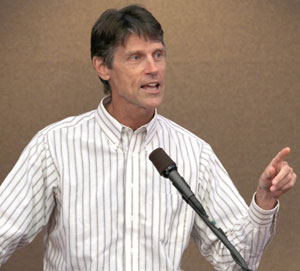 Juliana Barr, professor of history at the University of Florida, discusses the Spanish colonial period with teachers at the Austin institute. 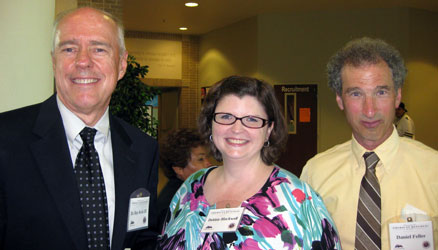 The teachers who participated in the Houston program. Alan Taylor, professor of history at the University of California, Davis, addresses teachers in Fort Worth. 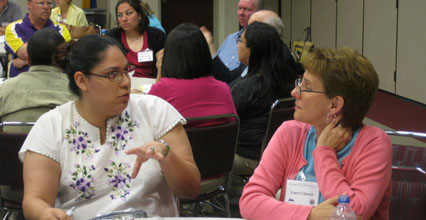 Lorri Glover discusses the American colonial period with a teacher in Laredo.