Soul of a People Nominated for Writers Guild Award

Among President Franklin Delano Roosevelt's New Deal programs was a unique initiative designed to aid unemployed writers at a time when the nation suffered rampant poverty and hardship. The Federal Writers' Project (FWP), which at its height employed over 6,600 writers in all forty-eight states, set out to create an American self-portrait through a series of state travel guides. FWP writers traveled the country gathering stories, legends, and songs from every state to create the American Guides series, which captured unique voices and images of 1930s America. FWP writers include Ralph Ellison, John Cheever, and Zora Neal Hurston, who traveled across Florida with Texas folklorist Alan Lomax recording songs of the south. The unvarnished, "warts-and-all" approach of many writers, which sought to expose injustice as well as celebrate American triumphs, proved controversial and later attracted the attention of the House Un-American Activities Committee.

At 718 pages, Texas: A Guide to the Lone Star State (1940) was among the most lengthy WPA guides. It contains twenty-nine suggested tours of the state, in-depth portraits of fifteen Texas cities, historical and contemporary maps, and numerous photographs of Texans from all walks of life. The Federal Writers' Project also issued guides to Houston, San Antonio, Beaumont, and a guide to "Old Villita" in San Antonio with then-mayor Maury Maverick as collaborating sponsor.

Noted Texas folklorist John Lomax was a major contributor to the Federal Writers' Project. As its first folklore editor, Lomax directed efforts to gather ex-slave narratives, devising a standard questionnaire for Project fieldworkers to use in gathering these narratives. He also collected folk songs and stories from communities throughout the nation. His son, Alan, who went on to become an important folklorist in his own right, began accompanying him on field trips while still in his teens.

Humanities Texas, along with the National Endowment for the Humanities, the Smithsonian Network, and four other state humanities councils provided funding for the documentary Soul of a People: Writing America's Story, which aired on the Smithsonian Channel in September 2009. The documentary, which was written by David A. Taylor, Olive Emma Bucklin, and Andrea Kalin, was nominated for a Writers Guild of America Award for Best Documentary. The winner will be announced on February 20, 2010. The Smithsonian Channel maintains a website for Soul of a People, which includes information on the documentary, the book on which it was based, and audio field recordings. 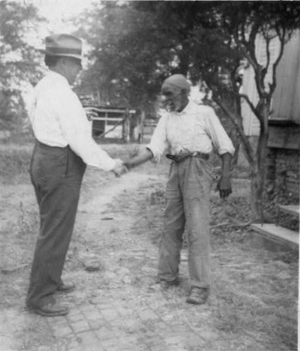