On the evening of Monday, September 8, Spanish teacher Terry Stewart of Decatur received the Outstanding Teaching of the Humanities Award. Humanities Texas presents these awards annually to twelve of the state's most accomplished and influential primary and secondary teachers. Stewart has distinguished himself by integrating Spanish culture into his teaching of the language. "It is my belief that a language teacher sees no difference between language and culture; they are synonymous," Stewart said.

Principal Jason Cochran presented Stewart with the award at Decatur High School's "Meet the Teachers" night. Congresswoman Kay Granger's outreach representative, Ms. Tate Reid, then read a letter from the Congresswoman congratulating Stewart on the recognition of his outstanding teaching.

In Stewart's AP Spanish classes, his students discuss the morality of bull fighting, the fall of Granada, Spanish authors such as playwright Lope de Vega, and artists such as Spanish Renaissance master El Greco—all in Spanish, of course. These lessons provide a great way to read, listen, speak, and write in the target language, and the students also "experience a new world … and learn to embrace differences in culture as the norm," Stewart said.

Students then get what Stewart calls "the icing on the cake"—a trip to Spain. The annual trips are open to the community as well as students. Rhonda Lemieux, whose two sons took Senior Stewart’s classes, explained that once the enthusiastic teacher settled in Decatur, “we could not get enough of his contagious yearning to learn more about other worlds."

Stewart also involves the community by teaching the students to donate and volunteer. Every year, students build their own piñatas and deliver them to nursing and children's homes during the holiday season. In addition to teaching classes and building piñatas, Stewart also founded a school flamenco dance team, Los Madrileños. The group has won six superior rating awards from the Pan American Student Forum Convention since 2002.

Students, parents, administrators, and fellow teachers alike applaud Senior Stewart's outstanding contributions to his school and community, and Humanities Texas is proud to recognize him as a remarkable teacher of the humanities. After all, as his former principal points out, "He has the personal power to encourage football players to dance flamenco!" 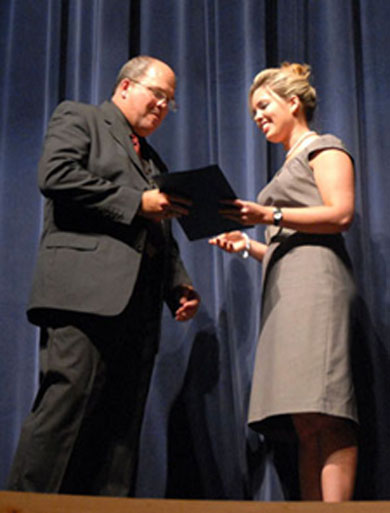