A Summer with the Bard

The most beloved hay barn in Texas, and perhaps the world, stands at the Winedale Center for American History, off highway 290 about halfway between Austin and Houston. Local folks sometimes used the 1880s barn for German-language plays early in the twentieth century, but before long, the barn and its nearby house fell into disrepair. In the 1960s, philanthropist Ima Hogg bought a house on the property, completed renovations, and donated the land and buildings to The University of Texas at Austin as a museum. In conversation with English professor Dr. James "Doc" Ayres, Miss Hogg noted that the barn, which had been converted in to a "theater barn," looked like an Elizabethan stage and suggested that Doc's Shakespeare students perform there. Doc nurtured a strong belief in learning Shakespeare through performance; he brought a class out to Winedale to perform in the theater barn, and Shakespeare at Winedale was created.

Now approaching its 39th year, Shakespeare at Winedale is a program in the UT English Department. "Winedalers," as we call ourselves, apply to the program and spend the summer putting together three Shakespeare plays that we then perform in the theater barn. Fourteen to eighteen students, the director, and an assistant director comprise the class. The students live on-site in a dormitory at the Winedale Center, now a flourishing collection of pioneer-era buildings, quilts, and other exhibits.

Shakespeare at Winedale is now directed by Winedale alumnus Dr. James Loehlin of the UT English Department. Under James, as Doc, Shakespeare at Winedale emphasizes communal work. Every morning begins around 6:30 a.m. with playing soccer, volleyball, ultimate Frisbee, or jogging to wake up. Then we join in a singing circle, to "sing for our meal." The songs are usually from Shakespeare plays, such as Much Ado About Nothing's "Hey Nonny Nonny" or As You Like It's "Lover and His Lass," though other summer-camp style songs also abound. And the circle is one of the underlying principles of Shakespeare at Winedale. The circle speaks to the equality and significance of everyone at Winedale: Soldier Number Ones are as important as the Hamlets and Rosalinds. Students then eat and perform chores, including mixing giant tubs of Gatorade to keep everyone hydrated throughout the hot, Texas-summer days. Then, everyone heads out to the barn to sweep.

Sweeping the barn is an adored activity. For Winedalers, the age-darkened columns and foot-worn stage of the barn embody the spirit of both the plays and Shakespeare at Winedale itself. The barn lacks walls around its front half, where the audience sits during the plays, so dust and grass blow in daily. Sweeping the barn every morning feels like giving it a much-deserved hug.

The mornings of the first five weeks of Winedale, the time before performances begin, are spent performing for each other and exploring the plays together. When not on stage, we stand in the audience, watching, looking for possible improvements. We discuss how Cornwall should gouge out Gloucester’s eyes on stage in King Lear and how to make Juliet a person worth Romeo’s sudden, dramatic love. We fill comedies with gags, which James promptly cuts, and try to wrap our minds around the tragedies. Afternoons are dedicated to sewing costumes, choreographing dances and fights, building props and set pieces, and doing whatever else must be done to make all three plays happen. Each night ends with a performance of the play, and though later performances for audiences are usually quite good, these versions that we show only to each other are often the very best. Afterward, everyone sits in a circle on stage discussing the performance and giving each other “notes” on possible changes.

In the days before opening weekend, stress levels are high and tempers flare. Students become a large family of siblings complete with conflicting personalities and intense laughter and sometimes tears. But on opening night, joy and pride overwhelm all other feelings. We take no public bows at Winedale, but rather run out in front of the barn, hold hands in a circle, and take our bows to each other.

I have spent two summers now immersed in Shakespeare's language and drama at Winedale. I cannot say whether it is Shakespeare, James, or the group, but Shakespeare at Winedale often brings out the very best in its students. We form close friendships and an everlasting love for Shakespeare. My fellow Shakespeare at Winedale alums and I often describe a Winedale summer as magical. Words such as "spirit" and "beauty" are thrown around, too, and though these words are appropriate, none of them captures the feeling of being a part of Winedale—like late nights when we throw dance parties in the barn or when we all lay by the pond gazing at the stars. We sit joking and laughing and, always, talking about the plays as if our hot, rural Texas version of Shakespeare's melodious, pun-filled universe is the only one that matters. 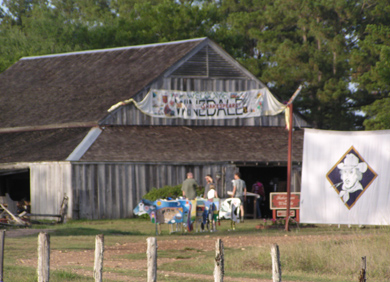 The theater barn that Shakespeare at Winedale students perform in at the Winedale Center for American History. Shakespeare at Winedale students perform Romeo and Juliet on the barn's stage. In this scene, the Prince (center) has just broken up a fight between Tybalt (right) and Benvolio (left) while the Capulet and Montague households look on.