Take a Tour Through Panhandle History

In 1874 and 1875, Comanche, Kiowa, Southern Cheyenne, and Arapaho Native American tribes clashed with the U.S. Army in a series of battles that came to be known as the Red River War. The war’s outcome changed the course of Southern Plains history: Native American tribes were expelled from their lands and resettled on reservations, and Euro-American farmers and ranchers began to settle the region, bringing with them new railroads that expanded trade and settlement. Development continued in the 1920s when oil was discovered in the area. However, amidst the rapid pace of development, many historical sites were all but forgotten, and the Red River War received little more than passing attention from historians.

The Texas Historical Commission’s new online brochure, Red River War of 1874–1875: Clash of Cultures in the Texas Panhandle, which received grant support from Humanities Texas, aims to reverse that trend. In addition to an overview of the war and its key figures, including General William T. Sherman and Comanche Chief Quanah Parker, the brochure includes a map of thirteen regional museums and heritage sites relevant to the war, including Palo Duro Canyon State Park, which was the site of the war’s most pivotal battle, and Claude, Texas, site of the Panhandle’s first cattle ranch.

The brochure also presents the findings of archeological fieldwork conducted from 1998 to 2003 as a part of the Red River War Battle Sites Project. During this period, THC archeologists worked to uncover the locations of six key battles: Red River, Lyman’s Wagon Train, Buffalo Wallow, Sweetwater Creek, Palo Duro Canyon, and Round Timber Creek. They discovered bullets, cartridges, and many other artifacts that had lain undisturbed for more than a century. These artifacts were crucial in clarifying tactics, chronology, and fighting positions. Working in tandem with archeologists, researchers uncovered long-lost documents in the National Archives and elsewhere.

Panhandle residents, history buffs, students, and teachers are sure to enjoy the brochure, available here. 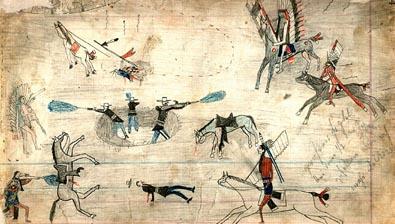 A Kiowa ledger drawing possibly depicting the Buffalo Wallow battle in 1874, one of several clashes between Southern Plains Indians and the U.S. Army during the Red River War. Courtesy of Texas Archeological Research Laboratory, The University of Texas at Austin (TMM-1988-21 Reverse).