“This may be the best workshop I’ve ever attended,” one teacher wrote in her final evaluation. Another emphasized the “passion” in the room: “The love of history was so strong.” A third teacher observed that “the whole atmosphere, the presenters, the teachers, the facilities remind me of excellence.” These comments typified the enthusiastic feedback Humanities Texas received from the eighty teachers who participated in our 2009 teacher enrichment institutes in June. Each year we collaborate with the state’s major universities and other cultural institutions to share the recent research and insight of leading scholars with Texas classroom teachers.

This year’s institutes explored "The U.S. Constitution and American History." An impressive faculty of historians, political scientists, legal scholars, and educational specialists examined the document’s antecedents, the compromises entailed in its adoption, and the amendments and decisions that expanded its authority over time. Our partners in the Austin and San Antonio programs were the College of Liberal Arts at The University of Texas at Austin, the Lyndon Baines Johnson Library and Museum, and The University of Texas at San Antonio.

Each institute featured the host campuses’ outstanding scholars along with prominent faculty from other institutions. Pulitzer Prize-winning Stanford historian Jack Rakove, Texas A&M historian Albert S. Broussard, and constitutional scholar Maeva Marcus of the Institute for Constitutional History joined the Austin program, while Lawrence Sager, dean of the School of Law of The University of Texas, and political scientists Joseph Cooper of Johns Hopkins University and Mary L. Volcansek of Texas Christian University traveled to San Antonio. Participating in both institutes were Monica Perales of the University of Houston, Charles Flanagan of the Key School in Annapolis, and Christine Blackerby of the National Archives, along with University of Texas historians H. W. Brands and George Forgie. Judge Diane P. Wood of the United States Court of Appeals for the Seventh Circuit added a special perspective to the Austin program. To underscore the relevance of abstract constitutional issues to the classroom, she reviewed significant contemporary cases involving students. The text of her presentation appears below.

As in previous years, the institutes derived much of their intellectual energy and insight from the eighty participating teachers. They came from all regions of Texas, bringing a wealth of diverse experiences. Some teach at large urban schools, while others work in small rural communities. Among the many new teachers were a number of veteran educators, including thirteen who had participated in our previous institutes. The teachers’ thoughtful questions during the presentations and their active discussion in the afternoon workshop sessions reflected the programs’ quality of engagement.

The afternoon workshops were an especially popular feature of the four-day institutes. These seminar-like discussions enabled small groups of teachers to work with the institute faculty to explore how best to utilize the lectures’ rich content and significant primary sources in the classroom. Christine Blackerby introduced the teachers at both institutes to some of the National Archives’ extraordinary primary source material, while Marsha Sharp, the LBJ Library’s education specialist, briefed participants in the Austin program on the Library's documentary resources for teachers. A generous grant from the Houston Endowment supplemented the institutes’ major funding from the National Endowment for the Humanities We the People initiative. 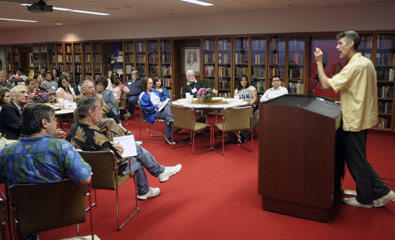 H. W. Brands speaks about FDR, the Supreme Court, and the Constitution to teachers and guests at "The U.S. Constitution and American History," a teacher institute held at Austin's Lyndon Baines Johnson Library and Museum from June 7–10, 2009. Photo by Charles Bogel. 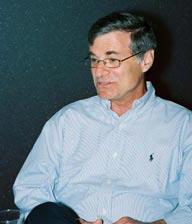 David Oshinksy delivered a lecture titled "Individual Liberties in Times of Crisis" at "The U.S. Constitution and American History" institute in Austin at the Lyndon Baines Johnson Library and Museum on June 8, 2009. Photo by Michael L. Gillette. Jack Rakove speaks about the Constitutional Covention at "The U.S. Constitution and American History" institute in Austin on June 7, 2009. Photo by Charles Bogel. 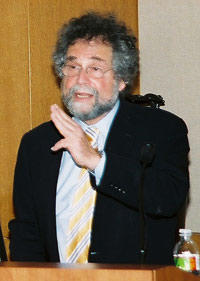 Lawrence Sager speaks on the Bill of Rights at "The U.S. Constitution and American History" institute in San Antonio on June 15, 2009. Photo by Lindsey Wall. 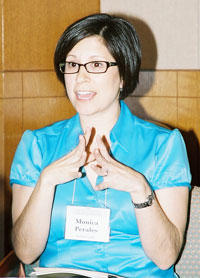 Monica Perales leads a discussion on Mexican Americans and the Constitution at "The U.S. Constitution and American History" institute in San Antonio on June 17, 2009. Photo by Michael L. Gillette.