Texas in Turmoil: Waco During the Civil War

In the years immediately preceding the Civil War, the recently founded town of Waco had a population of less than 1,000, and surrounding McLennan County was home to just 8,000 residents. Despite its distance from the major battles of the war, more than a quarter of McLennan County’s total population enlisted, contributing soldiers to both the Confederacy and the Union. Six Confederate generals hailed from Waco—a surprising fact given its small size at the time.

Given this history, it is no surprise that the era remains alive in Waco’s community memory. When the Historic Waco Foundation queried local residents about Civil War artifacts and documents that may have been passed down within their families, the community responded enthusiastically, loaning clothing, medals, documents, and other objects.

"Wacoans are very proud of their history," says Holly A. Browning, curator of collections at the Historic Waco Foundation. With support from Humanities Texas, the Foundation has recently opened an exhibition entitled Time of Turmoil: Texas and the Civil War. The exhibition features objects on loan from local residents as well as from the Sam Houston Memorial Museum, the Texas Heritage Museum at Hill County College, and the Pearce Civil War collection at Navarro College.

On February 15, the Foundation invited teachers who participated in our one-day workshop at Education Service Center Region 12 to view the exhibition and attend a reception.

The exhibition is housed in the historic Fort House, a Greek Revival home that is one of five managed by the Historic Waco Foundation.

In addition to Time of Turmoil, the house features Empire and Victorian furniture and Victorian portraits of Fort family members. Browning says that the historic houses make great field trips for children, and the Foundation offers many educational programs aimed at school-age audiences. 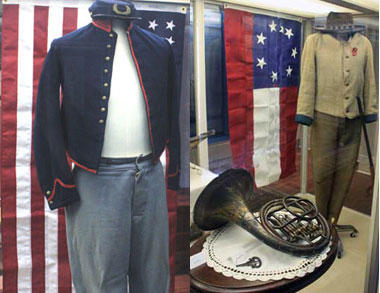 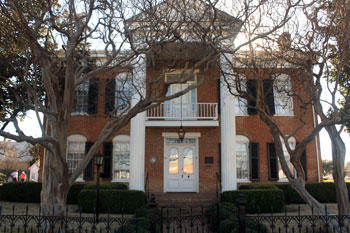 The historic Fort House in Waco. 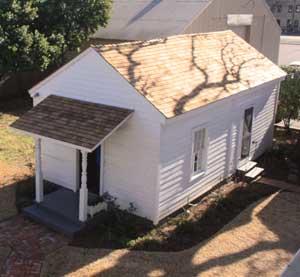 Servant's quarters behind the Fort House. From left to right: Connie Moss, a teacher who attended our Waco workshop, Holly A. Browning, curator of collections for the Historic Waco Foundation, and Eric Lupfer, director of grants and education for Humanities Texas. 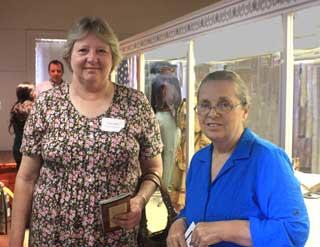 Connie Moss and Mary Duty (right), a Waco-area teacher who donated some of her own family memorabilia to the exhibition. 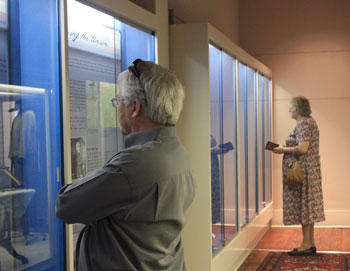