A Ticket to Ride: Musical Moments in 1965

Your first thought is the Beatles, right? The fact that we instantly associate the words "ticket to ride" with the Beatles’ song illustrates the band’s pervasive, enduring impact. After half a century, almost every word of every song is familiar to us. Each note of their music is imprinted on our minds so indelibly that we can detect the slightest variations played by cover bands. Even our children, born decades after the records were released, know the Beatles canon as well as we do. While the music that accompanied our coming of age in the 1960s was an eclectic mix of rock, pop, country, rhythm and blues, and folk songs, the Beatles—with twenty-one #1 records—dominated the soundtrack of our lives year after year.1 Their music was never stagnant, but evolved throughout that decade of change. Their infectious lyrics became increasingly elegant and thought-provoking; their melodies more intricate with experience and experimentation. The arrival of each new album held the attention of its listeners’ minds as well as their ears. The Beatles captured our generation's feelings and influenced its sensibilities.

Their fame in the U.S. soared overnight—February 9, 1964—when they performed on The Ed Sullivan Show. An estimated seventy-four million viewers, the largest television audience on record at the time, watched the program that night. Unfortunately, I was not one of them, because my parents never allowed us to watch television on school nights. The next morning at my high school, the word "beetles" was on everyone's lips. My first reaction: "Why this sudden obsession with Volkswagens?" ("Beetle" was our nickname for the loveable though homely VW sedan.) It didn't take long, however, to discover the source of my schoolmates' fervor. Within two months, the Beatles’ hits would occupy the top five spots on the Billboard Hot 100 chart.2

By 1965, Beatlemania had reached epidemic proportions. Moreover, the band spearheaded a full-scale British invasion. Joining the Beatles on the American charts were the Rolling Stones, Herman's Hermits, the Hollies, Gerry and the Pacemakers, the Kinks, the Troggs, the Who, the Yardbirds, and the Zombies. James Bond conquered a succession of diabolical fiends and movie box offices. British sports cars Jaguar, MG, Triumph, and Austin-Healy became popular in the American market, while imported fashions sported labels bearing the Union Jack.

Then, on August 19, 1965, the Beatles came to Houston. Local AM radio station KILT sponsored afternoon and evening performances at the Sam Houston Coliseum. Since crazed fans had mobbed the Beatles in Dallas the previous September, Houston officials hoped to prevent a recurrence of the melee.3 They did not succeed. KILT sponsors tried to keep the arrival information about the Beatles' charter flight under wraps in the hope of preventing a mob scene at the airport. A rival radio station, however, broadcast the 1:05 a.m. arrival time, inspiring some 2,000 teenagers to descend on the airport. Life imitated art, as teenage girls sang "We Love You, Beatles, Oh Yes We Do," adapted from the musical Bye, Bye, Birdie. Some of the youths managed to elude the small police contingent and climb onto the wings of the plane to bang on its windows. A larger crowd mobbed the mobile stairway, preventing the Beatles from exiting the plane. Officials ultimately had to extricate the band members and their managers atop a service truck used for unloading luggage.

The Sheraton-Lincoln Hotel where the Beatles were staying was also under siege. Some young fans dressed as maids in an imaginative but futile effort to gain access to their idols' hotel rooms. Other teens managed to secure press credentials to attend the band's afternoon news conference in the hotel. In fact, the assembled press corps was so youthful that a KILT official felt compelled to warn the “reporters” at the outset that if there were any sobbing or shrieking, the offenders would be ejected by police. Throughout the press conference, one star-struck young journalist repeatedly wrote only one word on her notepad: "Ringo."

The news conference revealed the genuine fear that the Beatles felt when they confronted out-of-control mobs of admirers. Asked his impression of Texas, John Lennon replied that they hadn't seen much of the state. "We've only seen Dallas and here. We nearly got killed both times." Paul McCartney later reflected that the Houston airport scene was a recurring hazard: [Local officials] "sent about twenty-five cops to take care of five thousand kids. In every town, they think 'our kids are different; they have common sense.'"4

Sharon Bennett, my girlfriend at the time, procured four tickets to the evening performance so our friends Woody Butler and Mary Catherine Stewart (now Butler) could accompany us. We sat in an upper row near the rear of the Coliseum. After the last of several warm-up bands played, the Beatles came on, clad in their identical dark suits. The only deviation in their wardrobe was John Lennon's Greek fisherman's cap. The band opened with a raucous, high-energy rendition of "Twist and Shout" that sent the audience into a screaming hysteria. The twelve-song set included "Dizzy Miss Lizzy," "Ticket to Ride," "Can't Buy Me Love," "A Hard Day's Night," and their latest hit, "Help!" Although the Beatles performed for thirty-five minutes, when they concluded with "I'm Down," the time seemed to have flown by.5

What most impressed me about the Beatles' performance was the tremendous energy that their live music exuded, more breathless and raw than their recordings. I was also struck by the band's extraordinary command over the adoring audience. The slightest flourish, gesture, or head-shake by any of the four would trigger a spontaneous chorus of shrieks. It was miraculous that we managed to hear the singing above the screams.

Barely a month after the Beatles' appearance in Houston, another remarkable live performance came to Texas. Bob Dylan, who had profoundly influenced the Beatles, played concerts in Austin and Dallas at a pivotal moment in his own career. Although I bought the tickets this time—two at four dollars each—I was only vaguely aware of the controversy that his recent appearances had sparked.

Folk purists at the 1965 Newport Jazz Festival had booed Dylan when he performed with an electric guitar in July. Subsequent live audiences continued to express their disapproval even as the younger rock generation eagerly bought up copies of his first all-electric album, Highway 61 Revisited, when it was released that August. After Angus Wynne III, a twenty-one year old Texas promoter, listened to Dylan's hit "Like a Rolling Stone," he cold-called the singer's manager in New York and brokered an agreement for the two Texas appearances. Nine days before the September 24th Austin date, Dylan flew to Toronto to rehearse with a Canadian band, the Hawks. The group consisted of Rick Danko, bass guitarist; Mark Levon Helm, drummer6; Garth Hudson, organist; Richard Manuel, pianist; and James "Robbie" Robertson, guitarist. The Austin event would be the first time for Bob Dylan to perform with the Hawks, who would soon become immortalized as The Band.

Dylan was late for his performance. The audience sat waiting in the Municipal Auditorium for a full thirty minutes after the program's scheduled starting time. When he finally appeared on stage, he projected little warmth or rapport with the crowd. Perhaps he anticipated boos. He simply began singing and playing his acoustic guitar and a harmonica, which was mounted on a hands-free bracket in front of his mouth. This first set consisted of "Gates of Eden;" "It's All Over Now, Baby Blue;" “Desolation Row,” and "Mr. Tambourine Man." As Dylan concluded the acoustic set, he muttered something about returning in a few minutes as the curtain came down.

When the curtain rose again, there stood Dylan with a Fender Jazzmaster electric guitar and behind him was the band. They played powerful renditions of "Tombstone Blues;" "It Ain't Me, Babe;" and "Like a Rolling Stone," among other songs. No one booed. "It was like being knocked over by this huge burst of sound," Angus Wynne recalled. Another member of the small audience that night, Stephanie Chernikowski, captured my own reaction perfectly: "It never entered my mind—or heart—not to love the electric stuff. Dylan and The Band were stunning. There were moments that you felt like you were the only person in the room with them."7 The auditorium itself contributed to the sensation she felt. With a seating capacity of only four thousand, the Austin venue was much smaller and more intimate than the Houston Coliseum.

Was Bob Dylan a poet, a philosopher, or merely a talented musician in the 1960s? Although he modestly said that "it's all music; nothing more, nothing less," his songs spoke to our generation as many of society's tightly-bound assumptions were unraveling. Like the Beatles, his popularity and influence have endured a half-century.

Even before the '60s drew to a close, its music had turned dark and leaden, reflecting the period's anger, despair, and drug-induced escapism. My own tastes remained hopelessly mired in the decade's earlier hopeful, buoyant sounds. By 1969, I was a VISTA volunteer, working in the inner-city neighborhoods of Worcester, Massachusetts. One hot Friday afternoon that August, three of my fellow volunteers invited me to join them on a 120-mile road trip to camp out and listen to live music. The thought of music sounded appealing, but not the camping. I had sworn off camping trips long ago after a few miserable outings as a Cub Scout, so I declined. Bad decision. I missed the signature cultural phenomenon of my generation: Woodstock. But in a span of less than forty days in 1965, I had witnessed two memorable musical moments.

What are your musical memories of the 1960s? Email them to us at editor@humanitiestexas.org.

Be sure to catch the LBJ Presidential Library’s current exhibition Ladies and Gentlemen . . . The Beatles! on display through January 10, 2016.

3The Beatles performed in Dallas on September 18, 1964. A large contingent of fans had gathered at the Cabana Motor Hotel in Dallas when the Beatles arrived there. As the band members walked from their car to the building's rear entrance, the jostling of the crowd caused George Harrison and Ringo Starr to fall.

4The Houston Post, August 20 and 21, 1965. A video segment of the Houston press conference can be found on YouTube.

5KILT's soundboard audio recording of the performance may be found on YouTube. The set list for both performances is as follows: "Twist and Shout"; "She’s a Woman"; "I Feel Fine"; "Dizzy Miss Lizzy"; "Ticket to Ride"; "Everybody’s Trying to be My Baby"; "Can’t Buy Me Love"; "Baby’s In Black"; "I Wanna Be Your Man"; "A Hard Day’s Night"; "Help!"; "I’m Down." Little girl watching The Beatles on The Ed Sullivan Show, 1964. The Beatles and their manager are transported in a service truck at Houston’s International Airport after a crowd of screaming fans broke police lines and prohibited them from coming down the plane’s steps during their arrival early morning in Houston, 1965. AP Images. The Beatles at the KILT press conference in advance of the 1965 concert in Houston. 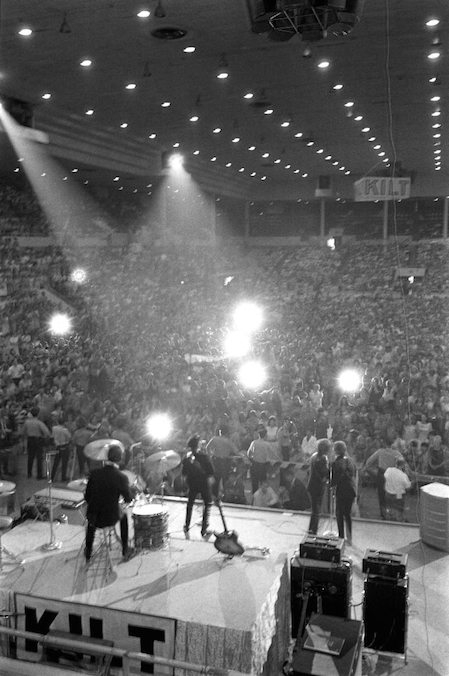 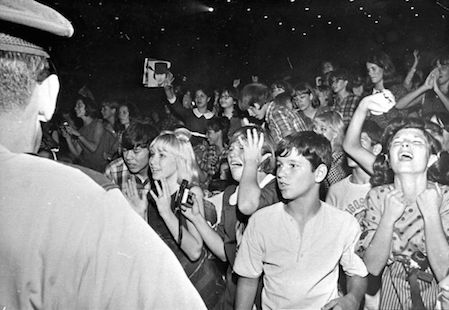 Fans in the audience of the Beatles concert in Houston on August 19, 1965. Houston Chronicle photo. 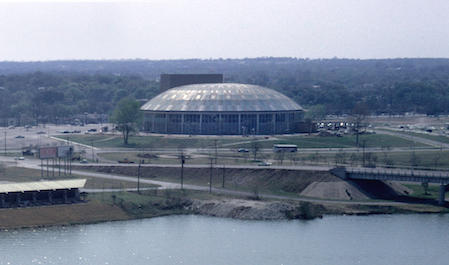