A Visit to the New Acropolis Museum

Climbing up the uneven paths of the Acropolis, visitors pass weathered theaters, ruined temples, and of course, the Parthenon—the node of Athenian life even today. While the Acropolis still cradles these large remainders of ancient Athens, the beautiful art and artifacts that once adorned them are now housed in the new Acropolis Museum.

Tucked into the winding roads across from the base of the Acropolis, the museum opened to the public in June 2009. The sleek new structure sits slightly below street level, interrupting a crush of white apartment buildings. Windows in the ground reveal that the museum floats above the ongoing architectural excavation of what locals call the Old City. Thick pillars raise the entire building a few yards above the dig site so that visitors literally walk above ancient Athens.

For now, the dirt-caked paths and half-walls of the Old City remain closed to the public, but visitors crowd the viewing area near the door, contrasting the modern world with the ancient. The Old City is intermittently visible through floor windows throughout the museum's three stories, reminding visitors that the sculptures they walk between were once part of a very different world.

The trip through the museum begins in the Slopes of the Acropolis Gallery, where the floor tilts upward, mimicking the ascent up the Rock. The room displays unassuming tokens of everyday life: dishes, coins, and small reliefs line the walls. The knickknacks draw viewers in with their tiny details until the gallery ends in a set of stairs. Suddenly, the Hekatompedon comes into view.

The giant relief sculpture depicts a massive lioness ripping apart a calf. She's flanked by a monster of three conjoined torsos on the right and Herakles wrestling the scaly tail of the Triton monster on the left. The piece comes alive with the full force of Greek mythology.

Following the Hekatompedon, the second gallery opens up, high-ceilinged and full of white marble statues glowing in the diffuse afternoon sunlight. Usually made of marble from the islands of Naxos or Paros, the statues were once painted in bold colors. Today, it's hard to imagine these ethereal figures masked in reds, greens, and blues. Most of these statues are from the Archaic period, 7th century BCE through 479 BCE, and were dedications to gods or goddesses from affluent Athenians, depicting men on horseback or single maidens, known as korai. Their bearing is stiff and formal. They stand upright, staring ahead.

The gallery eventually narrows, and the sculptures’ postures become more natural. These works are from the Classical Era, after the Persian Wars, when Athens prospered. Friezes from the Erechtheion, a temple to Athena Nike, display the goddess leading a bull or tying her sandal. Other scenes show Athenians victorious over the Persians.

Most striking, however, are the Caryatids, the large korai that once served as columns for the porch of the Erechtheion. One of the women is on display in the British Museum, but the other five look out over a balcony above the ground floor, much like they once looked out over the side of the Acropolis.

The Parthenon Gallery mimics the orientation and dimensions of the Parthenon itself. Visitors walk the perimeter of a large rectangle displaying the interior frieze at eye level. Another half wall extends down from the ceiling a few yards out and displays the exterior reliefs, or metopes. The images on the metopes symbolize the Athenian victory in the Persian Wars, and each wall focuses on a different subject. On the north wall, the sacking of Troy rages on while youths fight off centaurs trying to kidnap their women. On the east side, the Olympian gods battle giants who have attempted to overthrow them. And over on the west, young Athenians face off against the Amazons threatening the city.

At either end of the gallery are the remains of the pediments that stood at either end of the Parthenon's roof. The east pediment above the entrance to the Parthenon portrays the birth of Athena, while the western pediment depicts the goddess battling Poseidon over the name of the city. Many of the figures were destroyed or no longer reside in Greece, but the awesome scope of the works is obvious.

A bench lines the glass outer walls of the Parthenon Gallery, and from the north side of the room there is a clear view of the Parthenon. As the sun sets, the heart of Athens glows, lit now by electricity but looking for all the world like some ancient flame burns inside.

Steph Bates served as editor and executive assistant at Humanities Texas from 2008–2009. She is currently the academic assistant at the Hellenic American University Writing Center in Athens, Greece. 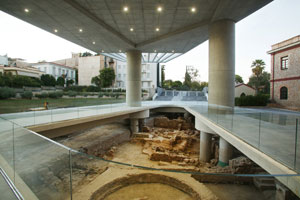 Archaeological excavation at the Acropolis Museum. All photos on this page by Nikos Daniilidis. 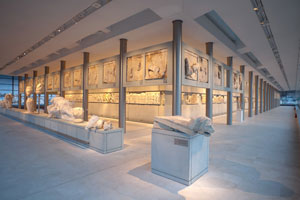 Inside the Parthenon Gallery. 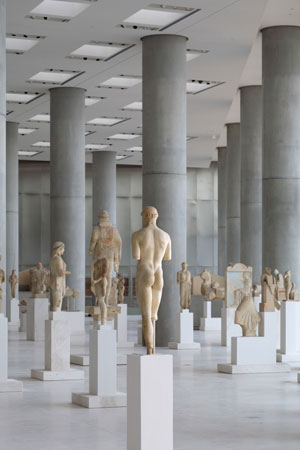 Statues from the Archaic period on display in the Acropolis Museum. 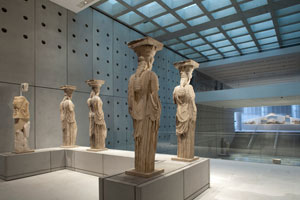 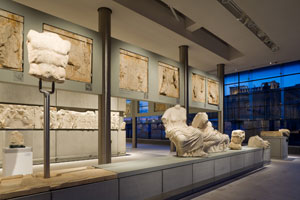 Inside the Parthenon Gallery at night. 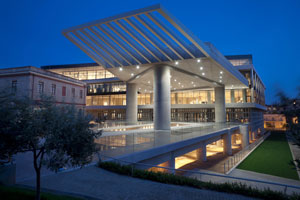 The museum's entrance by night.