In this ongoing feature, we profile our Humanities Texas board members—this month, Chase Untermeyer, an international business consultant who formerly served as ambassador to Qatar. Ambassador Untermeyer has had a varied and distinguished career encompassing business, public service, journalism, and education. He has held both elected and appointed office at all four levels of government—local, state, national, and international.

Untermeyer, who grew up in Houston, studied government at Harvard College. After graduating from Harvard, he served as an officer in the United States Navy during the Vietnam War. Upon his return from Vietnam, he began work as a reporter for the Houston Chronicle, where he worked for three years before embarking on a career of public service.

After representing western Houston in the Texas legislature for three years, Ambassador Untermeyer moved to Washington, DC to serve as executive assistant to then-Vice President George H. W. Bush. The many government posts he has held include Assistant Secretary of the Navy for Manpower and Reserve Affairs under President Reagan and Director of Presidential Personnel under the first President Bush. He also served as director of Voice for America, the overseas broadcasting arm of the U.S. government, from 1991–1993.

In 1993, Untermeyer returned to Houston to serve as director of public affairs at Compaq Computer Corporation, which was the second-largest computer company in the nation at that time. At Compaq, he spent three years managing a $50.5 million corporate giving program.

In 2002, Untermeyer left Compaq to serve as executive vice president and professor of public policy at The University of Texas Health Science Center–Houston, where he managed all local, state, federal, and international government relations for UTHSC before his 2004 nomination to serve as United States Ambassador to Qatar by President George W. Bush, a position he held until 2007.

Ambassador Untermeyer was a featured speaker at our February 2011 workshop on Texas history for social studies teachers. He is currently preparing a book for Texas A&M Press based on his personal journals of the Reagan-Bush period (1980–1993). His wife Diana wrote Qatar: Sand, Sea, and Sky, a book based on her experiences in that country that will be available in the fall. Their daughter Elly is a student at St. John's School in Houston. 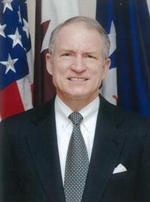 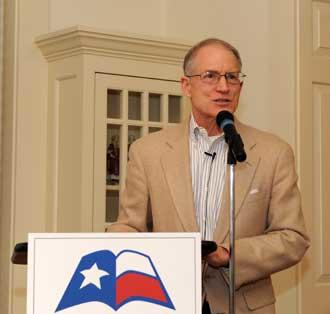 Chase Untermeyer discusses the rise of the two-party system in Texas at a February 2011 Humanities Texas teacher workshop on Texas history. Chase Untermeyer discusses primary sources with a teacher at the Texas history workshop.