Although the restoration of the Byrne-Reed House has taken only a year, it is the culmination of almost a decade’s work. As early as 2000, the Humanities Texas board weighed the possibility of acquiring a centrally located building. When I became executive director in 2003, board chair Maceo C. Dailey Jr. encouraged me to develop a plan for obtaining a building that would provide both visibility and a venue for our programs. A year later, our staff defined the organization’s spatial needs and began to scout the local real estate market. Size, location, and price were important considerations, as was the availability of parking. But we also wanted to find a historic building, one that reflected Humanities Texas’s emphasis on heritage. After looking at a dozen buildings, we settled on the only one that met all of our criteria, the Texas Oil Building at 710 West 15th Street, built in 1907. We quickly renamed it the Byrne-Reed House after the two families who had lived there before its conversion to offices in the 1950s, and we changed the address to its original designation: 1410 Rio Grande Street.

The Humanities Texas board took several Olympian leaps of faith in purchasing the building in December 2006. The fact that the century-old mansion had been entombed in a modern stucco façade for more than forty years made it impossible to tell the condition of the original structure as well as the cost of restoration. Humanities Texas also faced a daunting financial obstacle: we didn’t have the money to purchase the building, let alone restore it. The sellers solved the latter dilemma by carrying a three-year note, allowing us to take the riskiest leap of all: embarking on a campaign to raise $5 million to purchase and restore the Byrne-Reed House.

Our fundraising prospects improved dramatically when board member Julius Glickman agreed to chair the capital campaign. A prominent Houston attorney and a former chair of the University of Texas Development Board, Julius had spearheaded numerous local and statewide fund-raising endeavors. He brought extraordinary energy and expertise to the effort. He honed our case statement into a compelling appeal and developed a statewide fundraising strategy, enlisting current and former board members to take the lead in their communities. Leslie Blanton assisted Julius in Houston. Janie McGarr, Nancy Cain Marcus, Fran Vick, and Caren Prothro assumed responsibility for Dallas, as did Joe Krier in San Antonio. Kit Moncrief and Mary Volcansek approached Fort Worth donors, while Mickey Klein, Bettye Nowlin, Mary Margaret Farabee, and the late Lowell Lebermann organized our effort in Austin. Bill Wright guided our fund-raising in West Texas; Ellen Temple helped with prospective donors in East Texas and her many contacts throughout the state. The strength of this volunteer leadership led our board to conclude that a professional fund-raising firm was unnecessary.

The capital campaign for the purchase and restoration of the Byrne-Reed House has now raised all but $259,000 of the $5 million budget. Hundreds of individuals have participated in this effort with contributions ranging from five dollars to more than $500,000. While individual donors have been responsible for most of the funding, more than twenty Texas foundations, led by the Temple Foundation, the Still Water Foundation, the Brown Foundation, Inc., the Amon Carter Foundation, the Summerlee Foundation, and the Scurlock Foundation, have also generously supported the project. Two governmental entities, the National Endowment for the Humanities and the Texas Historical Commission, awarded timely and significant grants.

The National Endowment for the Humanities’s $1 million challenge grant, the endowment’s largest single grant ever in Texas, gave the initiative credibility and additional incentive for individuals and foundations to participate. Former staff member Kathie Tovo was the principal drafter of the NEH application, which served as the basis for many subsequent proposals. Steve Ross, Andrea Anderson, and Fred Winter in NEH’s Challenge Grant Office provided invaluable guidance with regard to our application. Deputy Chairman Carole Watson, aware that well-located historic buildings have significantly advanced the mission of other state humanities councils, has encouraged the endeavor from its inception.

Descendents of the Byrne and Reed families contributed more than money to restore their ancestors’ home. Tom Reynolds, Edmund Byrne’s great grandson, provided the earliest and best photograph of the building’s exterior. The architects and contractors made extensive use of this professional-quality photograph throughout the restoration of the exterior. Noelle Paulette gathered numerous historical photographs from her fellow descendents of David Reed. These remarkable images documented many important architectural features of the building’s interior and exterior.

The expertise of many professionals in the fields of historic preservation and construction has made the restoration a remarkable success. Architectural historian Gregg Free, who authored the Historic Structure Report, first advised us that much of the hidden original structure was intact and that the stucco façade could be easily removed. The University of Texas School of Architecture faculty also provided early guidance. Larry Speck and Wayne Bell served on our Architectural Advisory Group, along with noted architectural historian William Seale. Professor Michael Holleran’s graduate students used the Byrne-Reed House as their project in a preservation studio course. Project architect Emily Little and her colleagues at ClaytonLevyLittle exercised great sensitivity in balancing the principles of historic preservation with the imperatives of code compliance and accessibility, creating a twenty-first century office environment within a century-old mansion. The Humanities Texas Board retained HS&A as the project manager. HS&A president Dave Stauch, who had overseen the restoration of the state capitol, and Bill McCann, an experienced project manager, carefully analyzed the scope of work, interviewed prospective architects and contractors, and monitored the cost of the restoration. Finally, Journeyman Construction brought an array of skilled subcontractors who demonstrated that the caliber of gifted artisans who built the Byrne-Reed House in 1907 still exists today.

We at Humanities Texas deeply appreciate the involvement of all of those whose efforts and support have made this restoration possible. We hope that everyone who helped will take the opportunity to see the finished product. The restoration’s success, however, is only the first measure of the endeavor’s merit. The real test will be the productive and creative use of the Byrne-Reed House to enable Humanities Texas to serve the citizens of Austin and Texans generally. 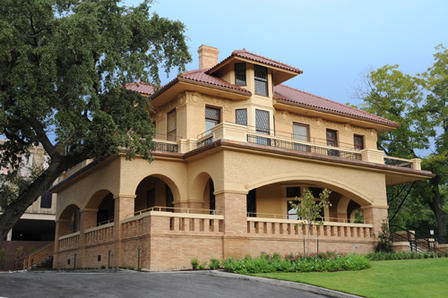 The southeast corner of the Byrne-Reed House. All photos by Humanities Texas unless otherwise noted. 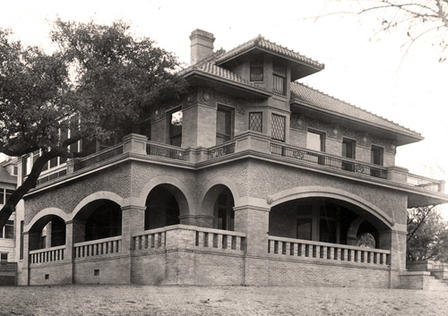 The southeast corner of Edmund Byrne's house shortly after it was built. Photo courtesy of Tom Reynolds. 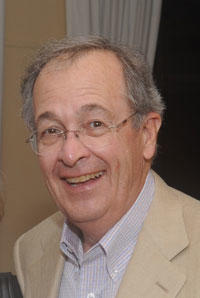 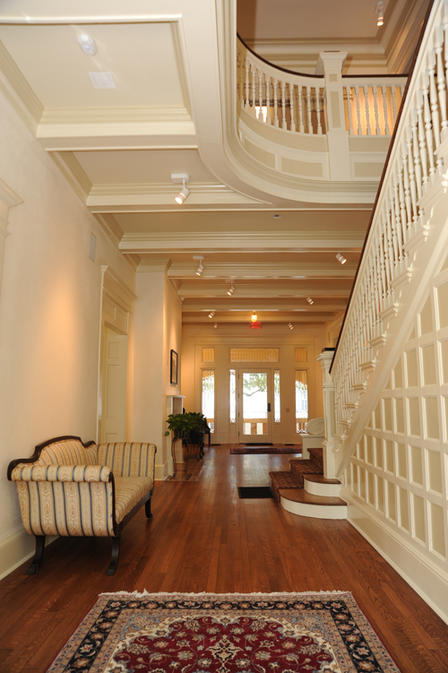 The gallery and grand staircase viewed from the north. 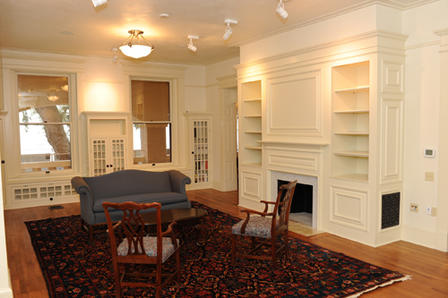 The Julius and Suzan Glickman Room. 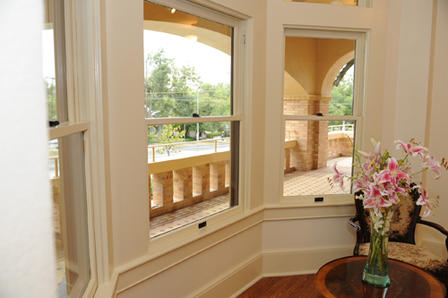 A closer view of the bay window in the Glickman room. 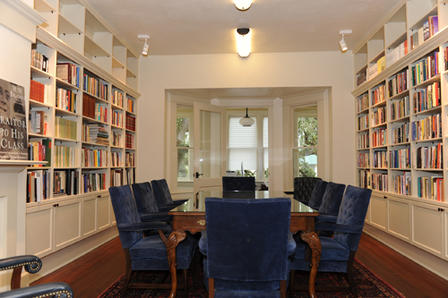 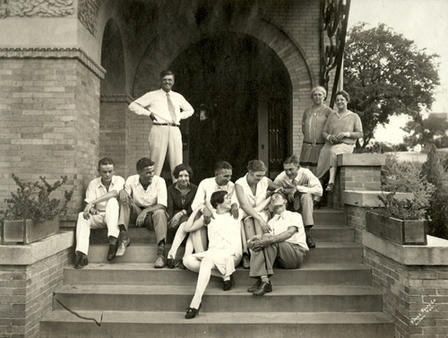 Reed family and friends on the steps leading up to the main entrance of the Byrne-Reed House off Rio Grande. Courtesy of the Reed family. 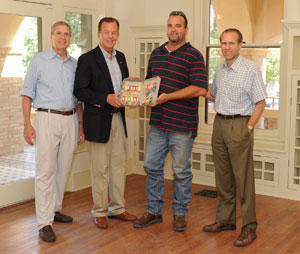 Michael L. Gillette and past board chair Joseph R. Krier receiving the keys to the Byrne-Reed House from John Patrick of Journeyman Construction, Inc. and Bill McCann of HS&A.