Humanities Texas is deeply saddened by the loss of William S. Livingston, who passed away on August 15, 2013 at the age of ninety-three.

An Ohio native and World War II veteran, Dr. Livingston earned the Bronze Star and Purple Heart in the Battle of the Bulge. He came to The University of Texas at Austin in 1949 as a government professor and spent the next six decades teaching and serving the university in various roles, including chair of the Government Department, vice chancellor of academic programs, and vice president and dean of graduate studies. He led the committee that planned the development of the Lyndon B. Johnson School of Public Affairs. In 1992, he served as the university’s acting president.

“Bill Livingston embodied all the best qualities of a university leader: erudition, eloquence, sweeping vision, warmth, and good humor,” said UT President Bill Powers. “The University of Texas is a better place for his lifetime of service. He was an inspiration to generations of Longhorns, and we all will miss him.”

Dr. Livingston was a popular and influential member of the Humanities Texas Board of Directors from 2004 to 2009. He was instrumental in organizing our first summer teacher institute and was consistently one of the most inspiring presenters. In recent years, Humanities Texas hosted an annual birthday party for him at the Byrne-Reed House.

Dr. Livingston is survived by his wife of seventy years, Lana; two sons and daughters-in-law; two grandsons and their wives; and four great-grandchildren. 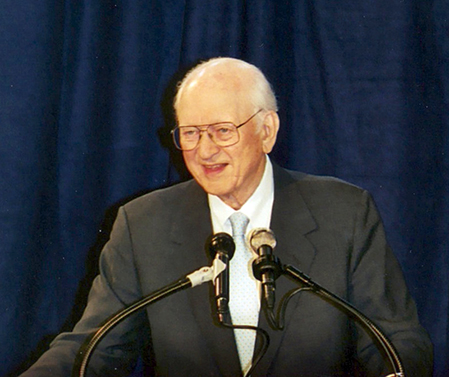 Bill Livingston speaking at the 2004 Humanities Texas "Institute on Congress and American History."