Latinos played a critical role on and off the battlefields of World War II. Despite their dedication to the war effort, they experienced widespread segregation and discrimination in the United States. In demanding equal rights, Latinos became part of a larger effort by marginalized groups to redefine the meaning of United States citizenship during the war and after, giving rise to a new sense of identity. Episode 3 of Latino Americans traces these developments and enriches the narrative of U.S. engagement in World War II and the society created in the postwar period.
This guide introduces teachers to the Latino Americans documentary series and related instructional materials below.

Macario García was a Medal of Honor-winning soldier in World War II. He is also known for the controversy surrounding the time in 1945 when he was turned away from a café in Richmond, Texas. In this lesson, students will explore primary and secondary sources from the time period to assess the dynamics of race that existed during World War II, both in the military and on the home front.

Fashion is often an expression of personal or group identity. In the 1940s, the “zoot suit” became closely associated African American, Mexican American, and Filipino American youth. In this lesson plan, students will learn about the Zoot Suit Riots of 1943 in Los Angeles, California, and how they sprang from deep-rooted tensions between white Americans and Mexican American youth. By examining primary and secondary sources from the period, including photographs and newspaper accounts, students will gain multiple perspectives on the issues surrounding the Zoot Suit Riots.

Héctor P. García was an especially effective and significant advocate for civil rights in the United States. His grassroots efforts began with fighting for the rights of Latino veterans after World War II. Founder of the activist organization the American GI Forum, García emphasized that securing rights such as voting, serving in the military, and receiving a good education would elevate the status of Latinos and grant them the broader civil rights to which all Americans are entitled.

Explore the Digital Repository for primary sources that appear in these curriculum sets along with other resources related to Latino engagement in World War II and the society created in the postwar period. 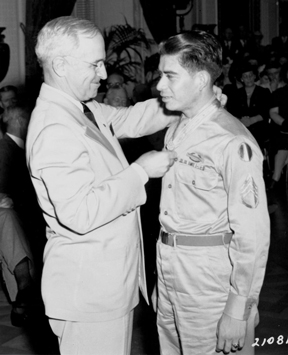 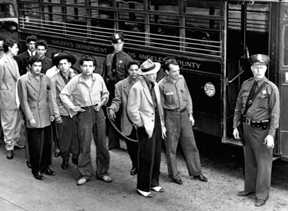 "Zoot Suiters" under arrest in Los Angeles, 1943. Library of Congress. 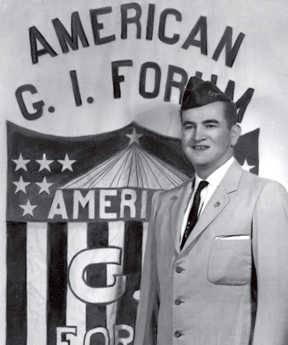