After her death in 1886, hundreds of Dickinson’s manuscripts were discovered by family members, resulting in several posthumous editions that brought increasing attention to her work. Mabel Loomis Todd and Thomas Wentworth Higginson brought out the first edition of the Poems of Emily Dickinson in 1890. A second co-edited volume, Poems of Emily Dickinson, Second Series, appeared the following year. Todd alone ushered into print a collection of Dickinson’s letters (1894) and a third volume of poems Poems of Emily Dickinson, Third Series (1896). Todd and Higginson’s editorial choices—and how they have shaped our understanding of Dickinson’s work—continue to produce much debate among scholars and readers alike. Dickinson’s manuscripts contain great variation. She often left multiple word choices in the margins and sometimes produced alternative versions of poems. This suggests that Dickinson did not have arrive at—or maybe even intend—a definitive version of each of her poems. However, Todd and Higginson sought to introduce her poetry to the world, which they felt required a form that would be accessible to nineteenth-century readers. Working from transcriptions of Dickinson’s manuscripts, Todd and Higginson organized the poems into groups, regularized capitalization and punctuation, altered the poems’ diction, and on occasion removed individual stanzas. With very few exceptions, Dickinson did not give her poems titles, though they were added by Todd and Higginson. Subsequent editors Thomas Johnson (The Poems of Emily Dickinson, 1955) and R.W. Franklin (The Poems of Emily Dickinson, 1998) attempted to order the poems chronologically, assigning a number to each; however, Johnson and Franklin arrived at very different chronologies for the poetry. This has led to the practice of many scholars and readers referring to the poems by their first lines.

Because so few of Dickinson’s poems were published in her lifetime, editors and scholars of Dickinson’s work frequently turn to Dickinson’s letters and handwritten manuscripts to better understand the poet’s writing process and relationship to her work. Dickinson sent a number of poems to her close friends and complied many of her manuscripts into small, hand-folded books, what her early editors called "fascicles." It should be noted that a large number of Dickinson’s poems survive in multiple versions, which makes identifying the "real" version of each of her poems quite difficult, if not impossible. For the poems in manuscript below, the titles and numbers refer to those assigned by R.W. Franklin in his 1998 variorum edition of The Poems of Emily Dickinson.

Emily Dickinson’s Poems: As She Preserved Them (Ed. Cristanne Miller, 2016) reproduces Dickinson’s fascicles and unbound sheet-poems in the order in which the poet copied them; this edition also includes the variants that Dickinson wrote on the pages she retained. The Gorgeous Nothings (Eds. Jen Bervin and Marta Werner, 2013) presents facsimiles of Dickinson’s “envelope poem” manuscripts, her fifty-two writings on envelopes and scraps of paper. 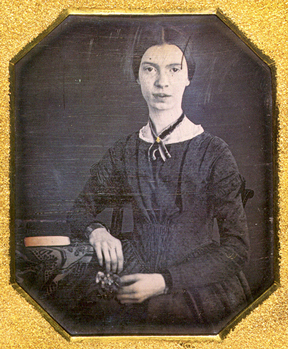 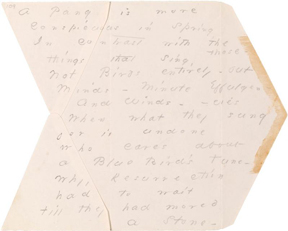 Emily Dickinson drafted this poem on the interior of an envelope that had been addressed to her sister, Lavinia. "A Pang is more conspicuous in Spring," ca. 1881. Amherst College Archives and Special Collections. 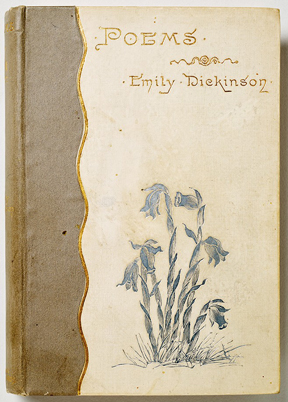 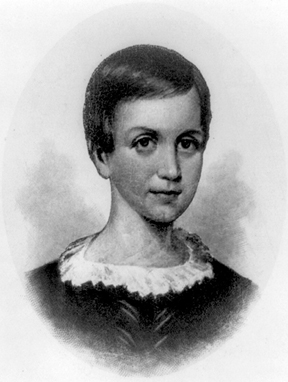 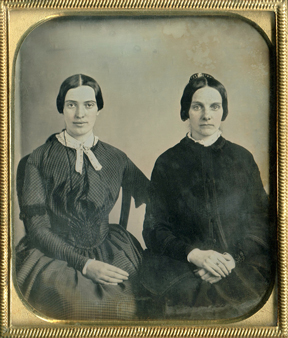 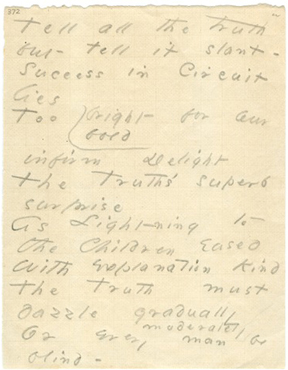