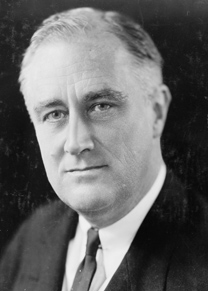 “This great Nation will endure as it has endured, will revive and will prosper. So, first of all, let me assert my firm belief that the only thing we have to fear is fear itself . . . ”

When he was inaugurated in March 1933, Franklin D. Roosevelt offered hope to a population battered by years of economic hardship. Natural disasters and drought had decimated farming in the Great Plains and southwest, while the ailing economy, failing financial markets, and unstable pyramids of holding companies had plunged the nation into a Great Depression. The banking system was on the verge of collapse, unemployment approached 25%, and food prices were falling. Wages also plummeted, reducing consumers’ purchasing power. With reduced demand for goods, factories and businesses closed, laying off workers and dragging families into the ranks of the destitute.

President Roosevelt promised “a new deal for the American people.” In the first one hundred days of his administration, he put his plans for relief, recovery, and reform into action, producing and signing fifteen major legislative initiatives. He believed that the federal government had to take a larger role in supplying the basic needs of citizens, while also enacting regulatory reform to prevent recurrence of the practices that had led to the economic disaster. His critics accused him of wasteful spending and government interference with the free enterprise system. But Roosevelt’s confidence and drive buoyed the American people, and he kept the public informed about the progress of his plans through radio talks known as “fireside chats.”

Not all of the New Deal programs achieved their aims, but Roosevelt’s vision had a lasting impact on the politics and social fabric of the United States. He was elected to four terms as president, spending the years after 1939 mobilizing society to meet the threat of Nazi Germany and Imperial Japan and leading the American people through World War II. President Roosevelt died in office in 1945, only weeks before V-E Day.

A brief worksheet that guides students through an initial examination of the Roosevelt poster.

A worksheet that asks students to examine closely each image featured on the Roosevelt poster.

A translation of the poster narrative describing Roosevelt's vision for his presidency.

Further activities, assignments, and resources related to the Roosevelt poster.

This guide shows how the President’s Vision Franklin D. Roosevelt materials correlate to the TEKS for social studies.

Download a full-size, high resolution version of the FDR poster. 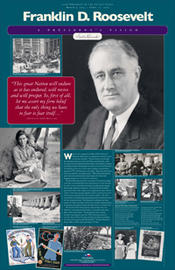 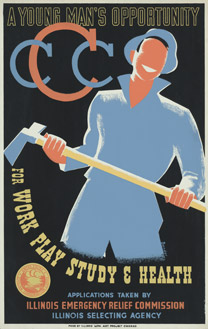