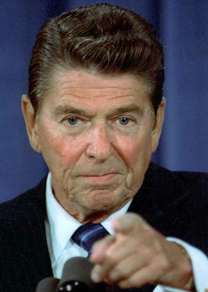 "In this present crisis, government is not the solution to our problem; government is the problem. . . . It is my intention to curb the size and influence of the Federal establishment and to demand recognition of the distinction between the powers granted to the Federal Government and those reserved to the States or to the people."

Reagan’s agenda incorporated three central objectives: reassert America’s status as a superpower by increasing military spending, reduce taxes, and submit a balanced budget to Congress. When these objectives proved contradictory, he focused on the first two at the expense of the third. As a result, the budget deficit remained high during Reagan’s tenure in office, and the national debt nearly tripled in size. However, inflation fell, unemployment dropped, and the gross national product nearly doubled. The public credited the economic recovery beginning in 1983 to the president’s policy changes and overwhelmingly elected him to a second term in 1984.

Reagan’s foreign policy was focused on winning the Cold War. He believed that by increasing military spending, the United States could pressure the Soviet Union to seek a mutual arms reduction. The prospect of nuclear war led Reagan to advocate creating a space-based antiballistic missile shield. Although his second term was marred by controversies in Central America and the Middle East, the president made inroads in U.S. relations with the Soviet Union. After developing a rapport with the progressive new Soviet leader Mikhail Gorbachev, the Americans and Soviets signed the Intermediate-Range Nuclear Forces Treaty in 1987, reducing hostilities between the two countries and raising hopes for an end to the Cold War.

In a 2010 Gallup poll, only John F. Kennedy outranked Reagan in popularity among recent presidents

A brief worksheet that guides students through an initial examination of the Reagan poster.

A worksheet that asks students to examine closely each image featured on the Reagan poster.

A translation of the poster narrative describing Reagan's vision for his presidency.

Further activities, assignments, and resources related to the Reagan poster.

This guide shows how the President’s Vision Ronald Reagan materials correlate to the TEKS for social studies.

Download a full-size, high-resolution version of the Reagan poster. 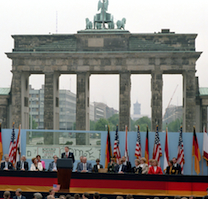 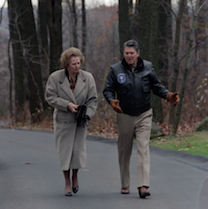