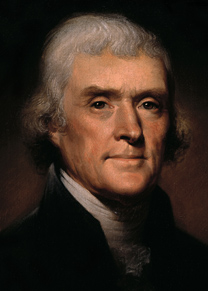 "A rising nation, spread over a wide and fruitful land, traversing all the seas with the rich productions of their industry…advancing rapidly to destinies beyond the reach of mortal eye..."

Thomas Jefferson, principal author of the Declaration of the Independence, was the third president of the republic he helped establish. His election marked the first transfer of power to an opposition camp and the first time the House of Representatives elected the president after a tie in electoral votes. After a bitter and divisive campaign, Jefferson issued a broad appeal for calm in his first inaugural address: “We are all republicans: we are all federalists.”

Jefferson was an active president who worked closely with allies in Congress, communicating his initiatives in powerful written messages. The successes of his administration included negotiation of the Louisiana Purchase, which doubled the national domain. He dispatched the Lewis and Clark expedition to explore the huge territories in the west of the North American continent. In keeping with his Republican principles, he repealed most internal taxes and reduced the public debt.

The nation’s fortunes suffered during Jefferson’s second term. The ongoing war in Europe and British naval interference in the Atlantic threatened commerce. In an attempt to maintain neutrality and punish British aggression, Jefferson asked Congress to pass the Embargo Act of 1807, which effectively halted all trade between America and other countries. This far-reaching and unpopular measure created hardship and dissent at home, unleashing bitter political attacks on his administration. Despite the renewed rancor, Jefferson kept his faith in the American people’s “love of liberty, obedience to law, and support of public authorities.”

A brief worksheet that guides students through an initial examination of the Jefferson poster.

A worksheet that asks students to examine closely each image featured on the Jefferson poster.

Worksheets that ask students to examine a primary source and then answer several questions regarding its context, meaning, and significance.

A translation of the poster narrative describing Jefferson's vision for his presidency.

Further activities, assignments, and resources related to the Jefferson poster.

This guide shows how the President’s Vision Thomas Jefferson materials correlate to the TEKS for social studies.

Download a full-size, high resolution version of the Jefferson poster. 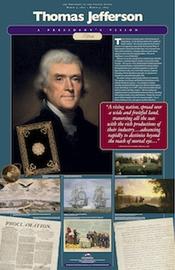 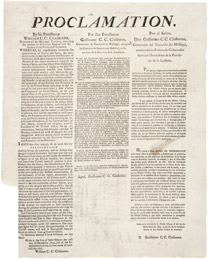