In June 2014, Humanities Texas held  institutes in San Antonio and Denton examining significant events and themes in American history of the 1860s.

The San Antonio and Denton institutes covered topics central to the state’s eighth-grade social studies curriculum. Faculty lectures and workshops addressed the causes, events, and legacy of the Civil War; Abraham Lincoln’s administration; suffragists and abolitionists; women in the South; the Transcontinental Railroad; Andrew Johnson’s administration; Reconstruction; art in the Civil War era; and American writing on the Civil War.

Ninety-nine teachers attended the institutes. As in past years, the institutes emphasized close interaction with scholars, the examination of primary sources, and the development of effective pedagogical strategies and engaging assignments and activities. The programs were designed ultimately to enhance teachers' mastery of the subjects they teach and to improve students' performance on state assessments. Content was aligned with the secondary social studies TEKS. Teachers received books and other instructional materials.

Educational specialists from the Amon Carter Museum of Art, the Briscoe Western Art Museum, the Institute of Texan Cultures, and the Portal to Texas History also served on the institutes’ faculty, providing participants with facsimiles of historic documents and works of art that support the teaching of U.S. history.

Program co-sponsors included The University of Texas at San Antonio and the University of North Texas. These workshops were made possible with major funding from the State of Texas and ongoing support from the National Endowment for the Humanities. "America in the 1860s" institute participants at the University of North Texas in Denton. 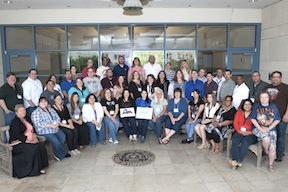 "America in the 1860s" institute participants at The University of Texas at San Antonio. Angela Boswell, professor of history at Henderson State University, leads a workshop on women in the South during the Civil War at the Denton institute. Robert Wooster, Regents Professor of History at Texas A&M University-Corpus Christi, delivers a lecture on Texas in the Civil War at the San Antonio institute.