On June 11–14, 2018, Humanities Texas partnered with the LBJ Presidential Library and the College of Liberal Arts at The University of Texas at Austin to hold a professional development institute for Texas teachers covering U.S. history during the 1920s and 1930s.

The institute focused on America between World War I and World War II, covering topics central to the state's U.S. history curriculum including politics and economic policies of the 1920s; immigration; prohibition; significant women; African Americans; Latino Americans; the stock market crash of 1929 and the Great Depression; Franklin D. Roosevelt, the New Deal, and his struggle with the Supreme Court; advances in transportation and communication; American art and literature during the interwar period; and the rise and decline of American isolationism.

The institute took place at the LBJ Presidential Library from June 11–14, 2018. The schedule is available here.

This program was part of the “Democracy and the Informed Citizen” Initiative administered by the Federation of State Humanities Councils. The initiative seeks to deepen the public’s knowledge and appreciation of the vital connections between democracy, the humanities, journalism, and an informed citizenry. 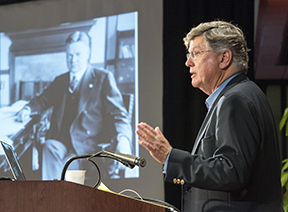 David M. Kennedy, the Donald J. McLachlan Professor of History Emeritus and Director Emeritus of the Bill Lane Center for the American West at Stanford University, delivers the institute’s keynote lecture, “America in the 1920s." Former Humanities Texas board member Betty Sue Flowers leads a seminar on American literature from the 1920s and 1930s. Michael Gillette, executive director of Humanities Texas, discusses revolutions in transportation and communications during the 1920s and 1930s. H. W. Brands, the Jack S. Blanton Sr. Chair in History at The University of Texas at Austin, leads a seminar on the enduring legacy of the New Deal. David M. Oshinsky, director of the division of medical humanities at New York University School of Medicine and a professor in the NYU Department of History, examines FDR and the New Deal.