Topics addressed in these three-day institutes included The Revolutionary War, the War of 1812, Indian Wars in the Southwest, the causes of the Civil War, World War I and II, the League of Nations and Wilson’s Fourteen Points, the Cold War, and the wars in Korea and Vietnam.

As in past years, the institutes emphasized close interaction with scholars, the examination of primary sources, and the development of effective pedagogical strategies and engaging assignments and activities. The programs were designed ultimately to enhance teachers' mastery of the subjects they teach and to improve students' performance on state assessments.

Educational specialists from the National Archives, the Amon Carter Museum of American Art, the National World War I Museum, the National Museum of the Pacific War, and the Institute of Texan Cultures also served on the institute faculty, providing participants with facsimiles of historic documents and works of art that support the teaching of U.S. history.

Our July 2013 newsletter included a slideshow of images from the Austin, Houston, El Paso, and San Antonio institutes. The newsletter also included a transcript of Gordon S. Wood's talk on the revolutionary origins of the Civil War.

View videos of faculty lectures from "America at War: From the Colonial Era to 1877":

View videos of faculty lectures from "America at War in the Twentieth Century":

These workshops were made possible with major funding from the state of Texas and ongoing support from the National Endowment for the Humanities. 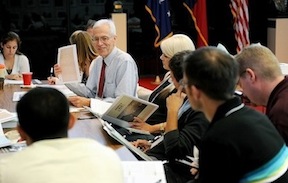 Charles Flanagan of the National Archives leads a workshop at the Austin institute examining historical documents related to the War of 1812. 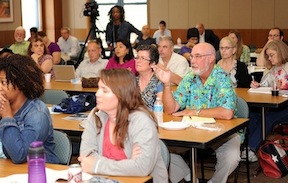 At the San Antonio institute, John Olmstead of South San Antonio High School asks a question after a lecture on American isolationism following World War I.