In June 2015, Humanities Texas held a professional development institute in Austin for Texas teachers covering the American presidency and U.S. history from 1970 to 2000.

Fifty-five teachers attended the institute. As in past years, the institute emphasized close interaction with scholars, the examination of primary sources, and the development of effective pedagogical strategies and engaging assignments and activities. The program was designed ultimately to enhance teachers' mastery of the subjects they teach and to improve students' performance on state assessments. Content was aligned with the secondary social studies TEKS. Teachers received books and other instructional materials.

The institute took place from June 7–10, 2015, at the LBJ Presidential Library. A schedule of the institute can be found here.

Program co-sponsors included the LBJ Presidential Library and the College of Liberal Arts at The University of Texas at Austin. This institute was made possible with major funding from the State of Texas and ongoing support from the National Endowment for the Humanities. 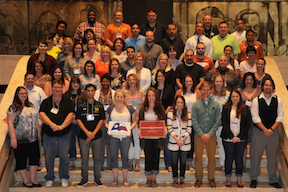 "American Presidents and the Nation, 1970–2000" institute participants at the LBJ Presidential Library. 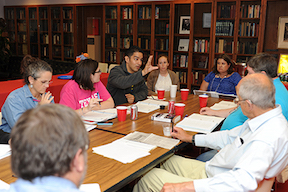 Ramon Silva of Southside High School discusses primary source documents related to the Clinton presidency with James Patterson during a seminar at the Austin institute. 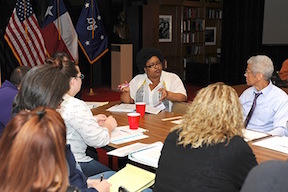