The institute covered American history during the late nineteenth century, focusing on topics central to the state’s U.S. history curriculum, including the legacy of Reconstruction; presidential politics; capitalism and the rise of big business; Native Americans and U.S. Indian policy; immigration and the immigrant experience; the labor movement; industrialization; the emergence of Jim Crow; scientific, technological, and medical innovation during the Gilded Age; populism and the agricultural revolution; art and literature of the era; women in public life; American imperialism; and significant Supreme Court decisions during the Gilded Age.

The institute took place at Southern Methodist University in Dallas from June 25–28, 2018. The schedule is available here.

This program was part of the “Democracy and the Informed Citizen” Initiative, administered by the Federation of State Humanities Councils. The initiative seeks to deepen the public’s knowledge and appreciation of the vital connections between democracy, the humanities, journalism, and an informed citizenry. David Nasaw, the Arthur M. Schlesinger, Jr. Professor of History at the CUNY Graduate Center and president of the Society of American Historians, leads a seminar on the American economy at the end of the nineteenth century. 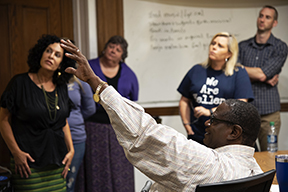 Institute participants discuss the literature of the Gilded Age with Michele Elam, the William Robertson Coe Professor at Stanford University. Heath W. Carter, associate professor of history at Valparaiso University, leads a seminar on industrialization and the labor movement during the Gilded Age. During one of the primary source seminars, an institute participant examines the civil rights bill proposed by Senator Charles Sumner in 1873. 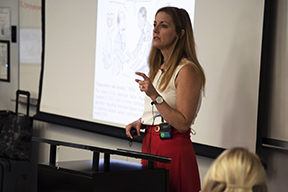 Juliana Barr, associate professor of history at Duke University, delivers a lecture on American Indians in the late nineteenth and early twentieth centuries.