In June 2016, Humanities Texas partnered with the LBJ Presidential Library and the College of Liberal Arts at The University of Texas at Austin to hold a professional development institute for Texas teachers covering U.S. history from 1945 to 1960.

The institute covered topics in post-war U.S. history, including the transition of the U.S. economy from wartime to peace, the origins of the Cold War and containment policy, the emergence of mass consumerism, the Truman and Eisenhower presidencies, the rise of rock and roll, the civil rights movement, significant women in post-war America, the battle against polio and other medical advances of the period, and American literature and film after the war.

The institute emphasized close interaction with scholars, the examination of primary sources, and the development of effective pedagogical strategies and engaging assignments and activities. The program was designed ultimately to enhance teachers’ mastery of the subjects they teach and to improve students' performance on state assessments. Content was aligned with the secondary social studies TEKS. Teachers received books and other instructional materials.

The institute took place from June 13–16, 2016, at the LBJ Presidential Library and the Byrne-Reed House. A schedule of the institute can be found here.

The institute was made possible with major funding from the State of Texas, with ongoing support from the National Endowment for the Humanities. The institute’s keynote lecture was supported in part with a generous grant from the Pulitzer Centennial Campfires Initiative. 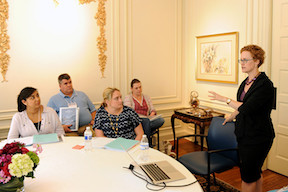 Kirsten Ostherr, professor of English at Rice University, leads a seminar on exploring the 1940s and 1950s through movies at the "Post-War America, 1945–1960" institute in Austin.