The U.S. Constitution and American History

The institutes covered topics central to courses in U.S. and government, including the design of the Constitution; the Bill of Rights; the separation of powers; the achievements of the Marshall Court; the War of 1812 and the War Powers Clause; important amendments to the Constitution; and significant civil rights cases of the nineteenth and twentieth centuries.

Educational specialists from the LBJ Library and Museum and the National Archives and Records Administration also served on the institute faculty, providing participants with facsimiles of historic documents that support the teaching of U.S. history.

More information can be found in the institutes' final report.

The institutes were made possible with major funding from a We the People grant from the National Endowment for the Humanities, with additional support from the Houston Endowment, a philanthropy endowed by Mr. and Mrs. Jesse H. Jones. 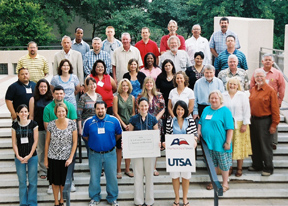 Participants gather in San Antonio on the UTSA campus. 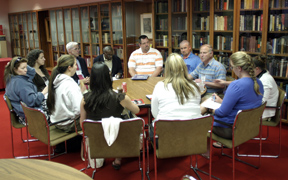