This fall, Humanities Texas will hold seven workshops for social studies and language arts teachers across the state.

On September 20, 2013, Humanities Texas will hold a workshop in Houston for secondary-level language arts teachers on teaching the plays of William Shakespeare. Faculty lectures will address the historical and cultural contexts of Shakespeare's works and approaches to commonly taught comedies and tragedies. Workshop faculty includes J. Dennis Huston of Rice University and Elizabeth Richmond-Garza and John Rumrich of The University of Texas at Austin.

In October, workshops on critical events in U.S. history between 1776 and 1836 will take place in Beaumont (October 1), Houston (October 2), Austin (October 3), and Dallas (October 4). Topics to be addressed include the Revolutionary War, debates over the ratification of the U.S. Constitution, the Second Great Awakening, and Jacksonian Democracy. Workshop faculty includes Pulitzer Prize-winning historians Jack N. Rakove (Stanford University) and Daniel Walker Howe (University of California at Los Angeles), Daniel Feller (University of Tennessee), and Thomas Pangle and Robert Olwell of The University of Texas at Austin.

On October 25, 2013, Humanities Texas will hold a one-day teacher workshop in San Antonio for secondary-level language arts teachers on American writing on the Civil War. Emphasis will be placed not only on the multiple perspectives that Americans had, and continue to have, on the Civil War, but also on the rhetorical strategies and devices that authors have used to communicate effectively. Featured authors will include Frederick Douglass, Ralph Waldo Emerson, Emily Dickinson, Walt Whitman, Abraham Lincoln, Henry David Thoreau, Stephen Crane, and Robert Lowell. Workshop faculty includes Randall Fuller (University of Tulsa) and Evan Carton, Daina Ramey Berry, and Coleman Hutchison, all of The University of Texas at Austin.

Teachers at all workshops will receive books and other instructional materials and be trained in the examination and interpretation of primary sources. Content at all seven workshops will be aligned with the TEKS. For details on eligibility, substitute and travel reimbursement, and venues or to apply online, visit the Upcoming Institutes page on the Humanities Texas website. 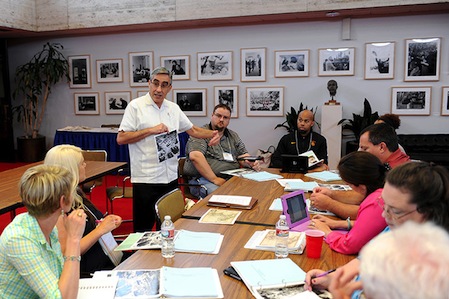 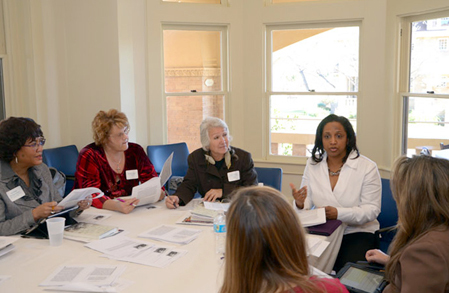 Daina Ramey Berry (The University of Texas at Austin) leads a discussion of Frederick Douglass's writing at our February 2013 workshop on American writing on the Civil War in Austin.