Around the State: Women's History Exhibitions

March is Women's History Month and venues across Texas are observing the occasion by displaying Humanities Texas traveling exhibitions! Learn more about these exhibitions below and plan ahead for next year by booking a traveling display today.

Citizens at Last: The Woman Suffrage Movement in Texas

From now through May 10, 2019, the Dr. Pepper Museum and Free Enterprise Institute in Waco will display Citizens at Last: The Woman Suffrage Movement in Texas.

The ratification of the Nineteenth Amendment in 1920 ended the woman suffrage movement and represented a great victory for American women in their quest for the right to vote as U.S. citizens. Texas was the first state in the South to ratify the Nineteenth Amendment, a landmark moment for all who took part in the struggle for representation. Citizens at Last focuses on the twenty-seven-year campaign for woman suffrage in Texas with panel topics covering the national beginnings of the movement, early Texas leaders, anti-suffrage sentiments, efforts to amend the Texas Constitution, primary suffrage, and, finally, the ratification of the Nineteenth Amendment. Based on the book Citizens at Last: The Woman Suffrage Movement in Texas and on an earlier exhibition of the same name by the Woman's Collection at Texas Woman's University Library, this freestanding exhibition uses archival photographs, newspaper clippings, cartoons, cards, and texts to display the struggle for woman suffrage in Texas.

Industrious and enterprising, rural Texas women performed the common tasks of housewives everywhere—cooking, housekeeping, and doing laundry. In addition, they raised large gardens, tended flocks of poultry, canned and preserved foods for their families, made and repaired furnishings, picked cotton, drove tractors, and took over the men's work during World War II. Drawn from files of the Texas Agricultural Extension Service archives at Texas A&M University, this exhibition uses photographs and explanatory texts to convey a sense of the lives of rural Texas women, helpful programs of the U.S. Department of Agriculture's Extension Service, and the changes that swept across rural Texas during the Great Depression and World War II.

Changing the Face of Power: Women in the U.S. Senate

Another popular exhibition, Changing the Face of Power: Women in the U.S. Senate, will be on display for students at a grade school in Austin during the month of March.

Melina Mara, staff photographer for the Washington Post, began photographing the thirteen women in the U.S. Senate in 2001, continuing as their number grew to fourteen in 2003. At a time when access to national politicians is increasingly controlled, Mara persuaded a majority of the senators to allow her to document the unprecedented role of women in the Senate at this time, both behind the scenes and before microphones. The exhibition includes informative text provided by the Center for American Women and Politics at Rutgers University and two audio presentations of interviews with the senators by Veteran White House journalist Helen Thomas. Changing the Face of Power is an exhibition by the Dolph Briscoe Center for American History at The University of Texas at Austin, presented in partnership with Humanities Texas.

To learn more about reserving an exhibition for your venue, please contact our exhibitions coordinator at exhibitions@humanitiestexas.org. 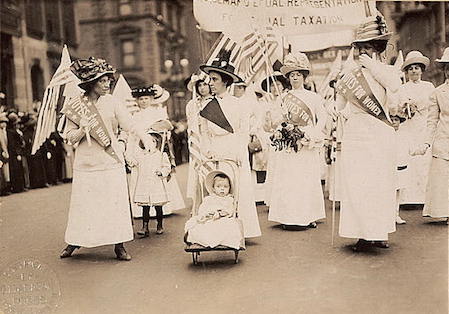 Suffragists marched with their daughters in the Votes for Women parade in New York City, May 4, 1912. Prints and Photographs Division, Library of Congress. 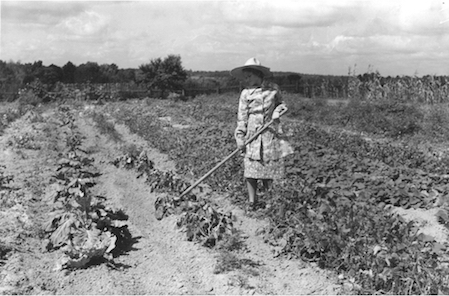 Senator Kay Bailey Hutchison (R-TX) leads her daughter by the hand to a line of fellow senators on the steps of the U.S. Capitol during a ceremony to remember the terrorist attacks on September 11, 2001. The Dolph Briscoe Center for American History, The University of Texas at Austin.