The First Night on Pointe du Hoc: An Excerpt from
Thomas M. Hatfield's Rudder: From Leader to Legend

In honor of the June 6 anniversary of D-Day, we are pleased to share this excerpt about the battle of Pointe du Hoc.

You can learn more about James Earl Rudder on our Texas Originals radio program.

London, 1943. Plans go forth for the Anglo-American attack across the English Channel on Nazi-occupied Europe in the spring of 1944. The cross-channel attack will be the main effort in Western Europe against Germany to end the war. A landing on the coast of Normandy in northwestern France will require breaching Hitler’s vaunted Atlantic Wall, a series of fortifications along the coast with powerful guns reaching out to sea. The most formidable are on a promontory called Pointe du Hoc, which juts with hundred-foot cliffs into the sea between two sandy beaches, code-named Omaha and Utah, where fifty thousand American troops will land on D-Day, the first day of the invasion. The guns of Pointe du Hoc endanger the success of the invasion.

The only certain way to destroy the guns is a ground attack, and the most feasible approach is from the sea to scale the cliffs, which the enemy believes are unassailable. The task will require a specialized Ranger force, well trained, disciplined, and led by a dauntless commander. A senior American naval officer speaks for many when he says, “It can’t be done. Three old women with brooms could keep the Rangers from climbing those cliffs.”

Gen. Omar N. Bradley, the American ground commander, assigns the mission to a thirty-three-year-old U.S. Army reserve lieutenant colonel from Texas, James Earl Rudder. Bradley says it was the most difficult decision he made during the entire war. Rudder tells him, “My men can do it,” referring to the 2nd Ranger Battalion, a group of some five hundred men he has recruited and trained. On June 6, 1944, half of the Rangers will scale the cliffs of Pointe du Hoc and destroy the guns, while the other half will assault Omaha and knock out more guns that imperil the landings there. As the decades pass, multitudes of visitors to Pointe du Hoc stare in disbelief at the cliffs the Rangers climbed under fire. Even Rudder says, “How did we do this? It was crazy then, and it’s crazy now.”

With darkness approaching on the night of June 6–7, Rudder was confronted with a difficult command decision. Should he consolidate his small force or leave them in two places, one defending the command post and the other on the coastal road? Of the two hundred men who had scaled the cliff, more than a third were dead or wounded, although many of the wounded were still fighting. Food and ammunition were running low, especially mortar rounds and grenades. The Germans were stronger and present in unknown numbers in no man’s land. Communication with Rangers on the road was touch-and-go. The eighty-five men on the road, including [Charles H. “Ace”] Parker’s twenty-three new arrivals, outnumbered those in the command post perimeter. The danger was greater than ever that the two groups might be eliminated separately. In this grim situation, [British Commando Lt. Col. Thomas H.] Trevor remarked casually, “Never have I been so convinced of anything as that I will be either a prisoner of war or a casualty by morning.” He was suggesting that they should focus on defending themselves rather than on their discouraging situation.

Rudder decided to hold both positions. As he assessed the situation, two German attacks on the command post had been turned back, the Germans had not attacked the coastal road, and [Maj. Max F.] Schneider would arrive soon. He knew that the Germans had his command post under observation and, if he concentrated his entire force near the tip of the pointe, it would attract German artillery. Given these considerations, he sent a patrol to the coastal road shortly before dark with orders to hold.

Out there on the coastal road, four lieutenants coordinated the defense, but it was no substitute for a single command, and they did not have reliable communications. They formed their defense south of the road in the shape of a right angle pointed to the southwest in order to stop a German attack before it reached the road. The defense depended on each man’s keeping his head and doing as he was trained. With the acute shortage of American ammunition, more men began using enemy weapons, as ammunition for them was plentiful around German positions now occupied by the Rangers.

Not long after dark, the Germans launched the first of the three attacks that night against the coastal road defense. The first attack began about one-half hour after dark, around 11:30 p.m. It began with an outburst of whistles and shouts near the right angle of the line. Undetected, the Germans had moved in close, and immediately after the shouts and whistles, they lobbed grenades toward the American positions. The Rangers beat back the attack, but it weakened their defense at the angle. In the confusion and darkness the men were out of contact with one another, and only those at the corner angle knew about its weakened condition. The darkness and scattered state of the Ranger force compounded the problem of organizing and adjusting the defense.

The second attack began about 1:00 a.m. with a stronger effort, again hitting from the south and southwest. As in the first attack, the Germans got close without being seen. The attack began with whistles, followed by the shouting of names like a roll call. They followed the shouting by extravagantly firing machine guns and machine pistols and throwing grenades. Many of the rounds were tracers, high and inaccurate, blindly spraying the hedgerows to intimidate the Americans. Rudder’s only information was the sound of guns firing, grenades exploding, and tracers streaking across the night sky. Although he recognized most of the gunfire was from German weapons, he was not certain that the enemy had overrun the coastal road because he knew the Rangers were also using German weapons.

The third attack developed about 3:00 a.m. from the southeast. This attack was even stronger than the previous ones and extended farther east toward Omaha Beach. Some of the attackers came from the no man’s land between the road and the pointe. Along the coastal road the Germans captured about twenty Rangers, killed several, and wounded others. In the absence of effective communications, men began passing the word to fall back toward the command post, but the word missed others, leaving them scattered in hedgerows and thick vegetation. By 4:00 a.m. (now June 7) about forty-eight Rangers had fallen back through no-man’s land and were in the defensive perimeter around the command post across the neck of the pointe. They mistakenly told Rudder that the force holding the coastal road had been destroyed. “Neutralized temporarily” would have been more accurate, because some were still there, unorganized and hiding.

Rudder now believed that the men within the command post perimeter were all that remained of his original force. When the sun rose on his second day on Pointe du Hoc, he had about ninety men able to bear arms, including the twenty-three who had come with Parker the previous evening. With his isolated force hemmed within a few acres, he expected an increase in both German artillery and ground attacks. He had no reason to expect help in time to save his beleaguered force. Similarly, his counterparts on Omaha Beach did not know if the Rangers on Pointe du Hoc had been killed or captured, had held on, or had been pushed into the sea. [Stars and Stripes writer G. K.] Hodenfield thought the end was near. “I gave up hope of getting off Pointe du Hoc alive. No reinforcements in sight, plenty of Germans in front of us, nothing behind us but sheer cliffs and [the] Channel . . . We were up a creek not only for food and water but also ammunition.” 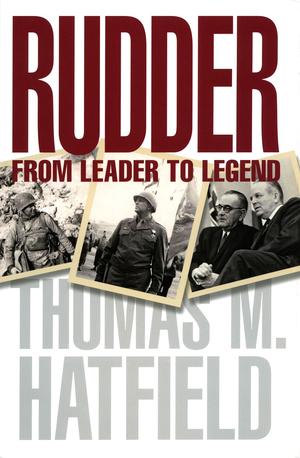 Rudder: From Leader to Legend was published by the Texas A&M University Press, with the support and cooperation of The Dolph Briscoe Center for American History, The University of Texas at Austin. The following excerpt is reprinted with the permission of the author and publisher. 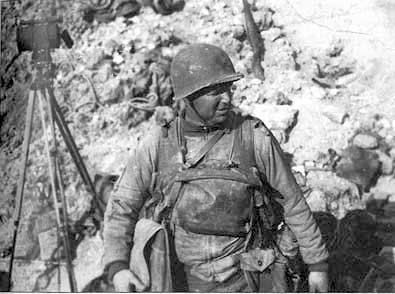 Rudder at Pointe du Hoc, mid-afternoon, June 7, 1944. "Don't lose this," he wrote to his wife. "It was taken by Maj. Jack Street and holds much history for me. I have enough equipment to weigh down a horse." Photo courtesy of Margaret Rudder, reprinted courtesy of Texas A&M University Press. 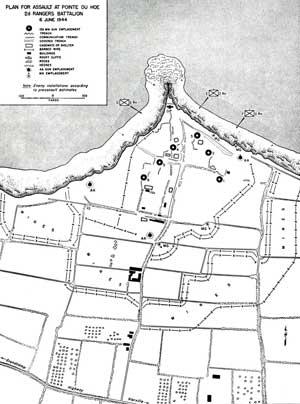 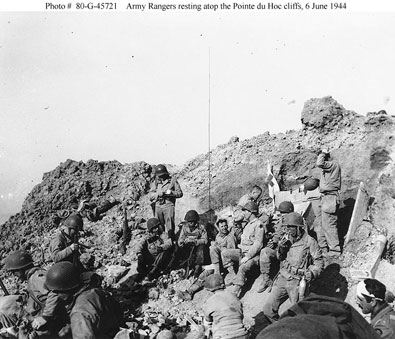 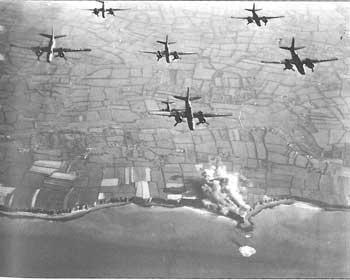 U.S. Ninth Air Force A-20 Havoc fighter-bombers over Pointe du Hoc prior to D-Day. Photo courtesy of the National Museum of the U.S. Air Force. 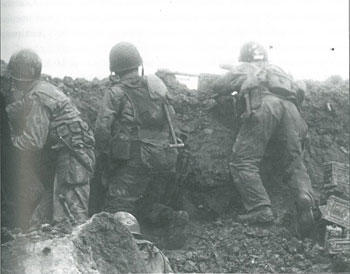 Men of the 2nd Ranger Battalion in the defensive perimeter of Rudder's command post on Point du Hoc. Photo courtesy of the U.S. National Archives. 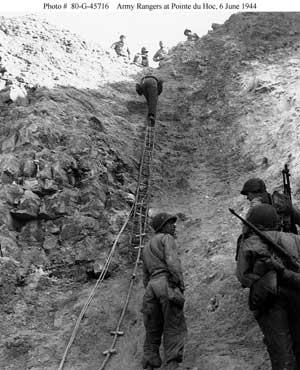 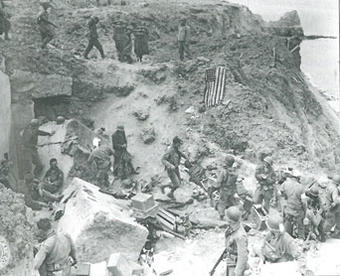