The German army considered Pointe du Hoc a perfect spot for defending the coast of France from Allied forces during World War II. From atop its hundred-foot cliffs, German guns could reach both Omaha Beach and Utah Beach. The Germans thought their position was secure. And it was—until June 1944, when Texan James Earl Rudder and his Second Ranger Battalion began to climb those cliffs.

Rudder graduated from Texas A&M University in 1932 and was commissioned a second lieutenant in the Army Reserves. He taught high school and college and coached football until he was called to active duty in 1941. He trained U.S. Army Rangers for one of D-Day's most dangerous operations: taking Pointe du Hoc.

During the assault, over half of Rudder's men were killed or wounded, and Rudder himself was shot in the leg. But the high ground was seized, and the German guns were silenced.

After the war, Rudder continued to take on tough challenges. As president of Texas A&M, he supported optional membership in the Corps of Cadets and helped open the university to women, despite great opposition.

When he died in 1970, Rudder was celebrated for his courageous leadership in both war and peace. An inscription on Rudder Tower, located on the A&M campus, remembers Rudder's "uncommon ability to inspire men and lead them to exceptional achievement."

For More about James Earl Rudder

In recognition of the significance of Rudder's tenure as president of Texas A&M University, the university erected a sculpture of Rudder in 1993. The statue, which was designed by Lawrence M. Ludtke, was originally located in front of Bizzell Hall, but was moved in 2009 to stand at the south end of Military Walk. 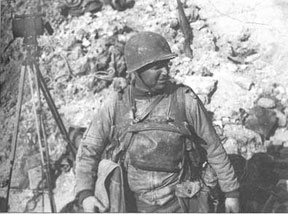 James Earl Rudder at Pointe du Hoc, June 7, 1944. "Don't lose this," he wrote to his wife. "It was taken by Maj. Jack Street and holds much history for me. I have enough equipment to weigh down a horse." Photo courtesy of Margaret Rudder, reprinted courtesy of Texas A&M University Press.