The Mexican Revolution came so close to El Paso that its citizens could literally watch battles unfold from their rooftops. From May 8–11, 1911, fighting raged between revolutionary troops led by Francisco Madero and the Federal troops of General Juan Navarro. The battle for Ciudad Juárez, directly across the border from El Paso, was critical to the revolution's outcome.

Following events that included several ignored orders to cease fire and the destruction of large swaths of Juárez, dictator Porfirio Díaz resigned after thirty-five years of rule, and Madero replaced him as president. The borderlands were of strategic importance to both revolutionaries and government forces – several crucial battles were fought in the region, and many revolutionary leaders were from northern Mexico.

To commemorate the centennial of the Mexican Revolution, the El Paso Museum of History will hold a lecture series entitled "The Mexican Revolution in the Greater El Paso Borderlands" to educate El Pasoans about the critical role their city played in this momentous event. Distinguished speakers will deliver monthly lectures on various facets of the revolution and its impact on the border region. Humanities Texas is pleased to provide the lecture series with grant support.

On January 21, 2010, Dr. Oscar Martinez, a University of Arizona professor specializing in the political, economic, and social history of the U.S.-Mexico borderlands, will speak on the borderlands' significance in the Mexican Revolution. On February 18, Dr. Maceo Dailey, Humanities Texas board member and professor of history at The University of Texas at El Paso, will give a lecture tiled "Booker T. Washington in El Paso During the Mexican Revolution." On March 25, Dr. Yolanda Levya, writer and professor of history at UTEP, will speak about the experience of local children during the revolution.

For more information about this and other grant-sponsored events, check out our events calendar. 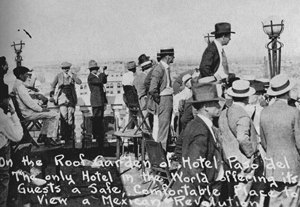 "On the Roof Garden of Hotel Paso del Norte: The only Hotel in the World offering its Guests a Safe, Comfortable Place to View a Mexican Revolution." Photo courtesy of the Library of Congress. 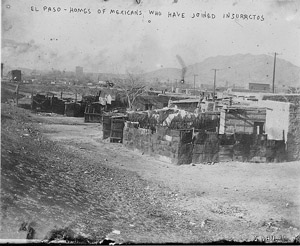 "El Paso–Homes of Mexicans who have joined Insurrectos." Photo courtesy of the George Grant Bain Collection at the Library of Congress. 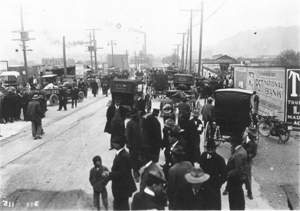 Men watching the battle of Juárez from El Paso. Photo from the Library of Congress.