May Restoration News: Spring at the Byrne-Reed House

Spring is here in Austin, and driving past the intersection of 15th and Rio Grande, you'll notice quite a few signs of renewal. Leaves have sprouted on the trees, and skies are often cloudless blue. In addition, a beautiful historic house now stands where a nondescript stucco-covered structure was once visible. Every day, more and more of the Byrne-Reed House is restored.

One example is the red clay tile roof, which is a replica of the house's original roof. The new roof has now been completely installed, to striking effect.

Another example is the beautiful decorative plaster frieze that crowns the building. Although parts of this frieze were left uncovered by the stucco facade added in the 1970s, others were damaged or missing. Master craftsmen in Lubbock created replicas of the damaged and missing portions of frieze, which have now been applied to the building and painted to match the brick exterior. The historic transoms and door frames have been painted dark brown.

In one of the photographs to the right, the frieze is visible, along with red clay roof tiles, copper flashing, and the second- and third-floor bay windows. Said photograph shows a view from the second-floor porch on the east facade, looking south.

Another image shows the bay window in the executive director's office. Note the custom wood windows with diamond mullions.

Another photo shows custom wood bay windows prior to installation. These windows were fabricated to reproduce historic windows that were previously removed or damaged.

Workers installing new custom wood windows in the first-floor bay window can be seen in another photo. One such window is located in the living room, facing the east porch.

One exciting aspect of the Byrne-Reed House is its proximity to the Capitol, as well as The University of Texas and many cultural institutions. A view east to the Capitol can be seen from a second-floor office.

Custom wood windows have been primed on the second floor, looking south.

One photo to the right shows a first-floor window on the north facade. Both the yellow brick and the iron-flecked brick are original, with the white paint that once coated them removed. The new custom wood window has been painted dark brown.

The arch pictured in a photo to the right, located on the north facade adjacent to the primary entry, was entirely covered by stucco prior to restoration. It has been repaired with historic brick. The reconstructed ledge cap and railing caps are poured concrete that will be finished with a coat of plaster. Physical evidence found during discovery indicates that this is how the ledge and railing caps were made historically.

In our April 8 update, we discussed the fabrication of the custom-made plaster column capitals. They have now been installed on partially reconstructed porch columns. Also note the historic tile in the photos to the right.

One photo to the right shows the joint at which an original piece of plaster column capital (white) meets a new replica piece (gray). This column is on the south terrace.

A close-up of a historic photo shows the plaster column capitals that we have replicated.

In compliance with ADA requirements, we have installed an elevator tower on the west side of the Byrne-Reed House. The west facade is the only one for which we do not have photographic evidence. The tower is designed to blend in with its surroundings and will also facilitate the activities of our exhibitions program.

The historic house featured unique scalloped plaster detail on the first floor arches. One photo shows a worker applying a smooth plaster coat to a first-floor porch arch in preparation for scallop application.

In addition to the scalloped plaster and second- and third-floor bay windows, note the metal safety railing which is required by code for the second-floor porch. The safety railing is designed to "disappear" from the perspective of someone looking at the building. The historic replica wrought iron railing will be installed in front of the safety railing.

Our restoration includes reestablishing the historic first-floor plan and interior details, including the plaster cove and ceiling details in the dining room. Plaster contractors are touching up the ceiling and making minor repairs.

A photo to the right shows the staircase to the second floor. Based on photographic documentation and evidence found during discovery, a decorative half wall and engaged newel post will be installed to replicate the staircase's original features, as the cardboard cutout shows.

Humanities Texas is in the final stages of our capital campaign supporting the restoration of the Byrne-Reed House. We are immensely grateful to the individuals and foundations that have contributed to this project and would appreciate any and all additional support. Your contributions will help us receive the full $1 million in matching funds from our National Endowment for the Humanities challenge grant. If you would like to donate to the capital campaign, please mail contributions to: 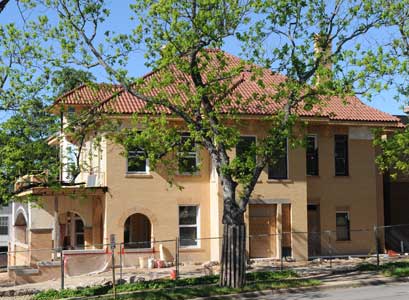 The northeast corner of the Byrne-Reed House on April 24, 2010. All photos on this page by Humanities Texas unless otherwise noted. 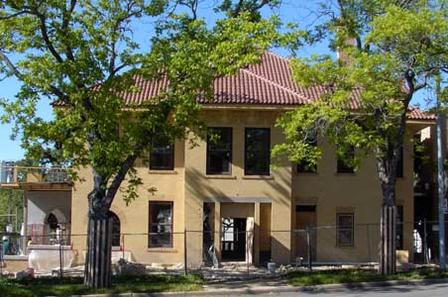 A closer view of the tile roof. A closer view of the replica plaster frieze. A view from the second-floor porch on the east facade, looking south. A view east to the Capitol. Repaired arch on the north facade. A column on the south terrace where an original piece of plaster column capital meets a new replica piece. The elevator tower on the building's west side. Applying a smooth plaster coat to a first-floor porch arch on April 12, 2010. The primary entrance to the Byrne-Reed House. Detail of the dining room ceiling.